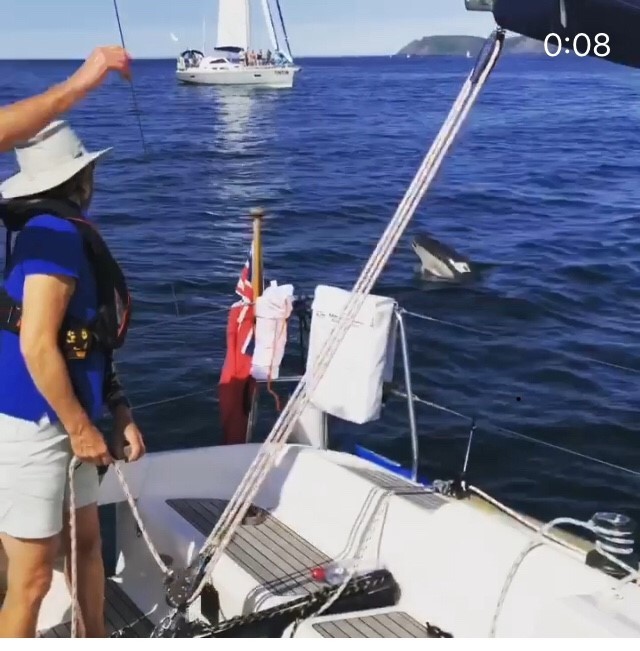 SYC Cruisers Skerries Race  8th August 2020
Despite the forecasted light winds, the sun and warm weather enticed ten boats to the starting line, the Middle Harbour limit buoy at 10.00 am.  Four boats were sailing single handed, competing for the annual single handed trophy.
Each boat was required to take their time passing the start and finish marks.  This however didnt stop the competitive element coming to the fore with all boats trying to be as close to the buoy as possible at 10.00 am.  Starfire was first off but was soon passed to windward by Gallant, Juju and Moonbeam who all kept along the shore.  Jenny T and Tintin headed out to sea and soon raised their gennakers.  The wind held with the first three boats rounding Prawle Point, at which point they fell into a totally flat spot.  Starfire and Jenny T were having a battle to find the best course for gennakers in a changeable wind and having seen the lack of wind off Prawle decided to head out to sea.  They were followed by Tintin, with the rest of the fleet following on.  All boats then fell into the light wind zone which gave helms some testing steering!  The 3 front boats closer to the shore put up spinnakers and Juju and Moonbeam pulled away from Gallant and ghosted towards Start Point.  The 3 boats further out also drifted on the tide towards Start having now taken gennakers down.  They did have the company of a couple of pods of dolphins to encourage them on their way and Tintins crew decided a swim was called for.  The following fleet without spinnakers were making their way to Prawle Point.
As Juju approached Start Point, the decision was made to shorten course and make this the turning point and for each yacht to take times at the turning point.  Juju, Moonbeam, Starfire and Tintin, reached the turning point and started heading home.  Gallant ran out of wind and time, so decided to retire.  Jenny T finished too and it was time for a swim on Starfire for the hot crew! As the boats closed on Prawle point on their way home the wind appeared and gave the fleet a nice sail into the Range.
Moonbeam took double first place on corrected time for the overall race and the single handed followed by Juju and Starfire.  Banksia, Shibui and Moonraker all deserve awards for perseverance, keeping going in light winds to the finish at Start in about 3.5 hours, but were close together and having a good race.  A very enjoyable day despite the lack of wind and hopefully we will have a similarly good turnout for the next day race when this can be planned, hopefully with a little more wind.  Thanks to everyone for taking part.
Next outing for the cruisers is Dittisham this weekend with a possible passage race back from Dartmouthon  Sunday.