Over Friday and Saturday, 120 excited Merlin Rocket teams arrived in Salcombe, moved their boats across the harbour to Mill Bay, enjoyed a generous quantity of Salcombe Gin and Tonic courtesy of our sponsors and caught up with old friends on the sunny SYC terrace. 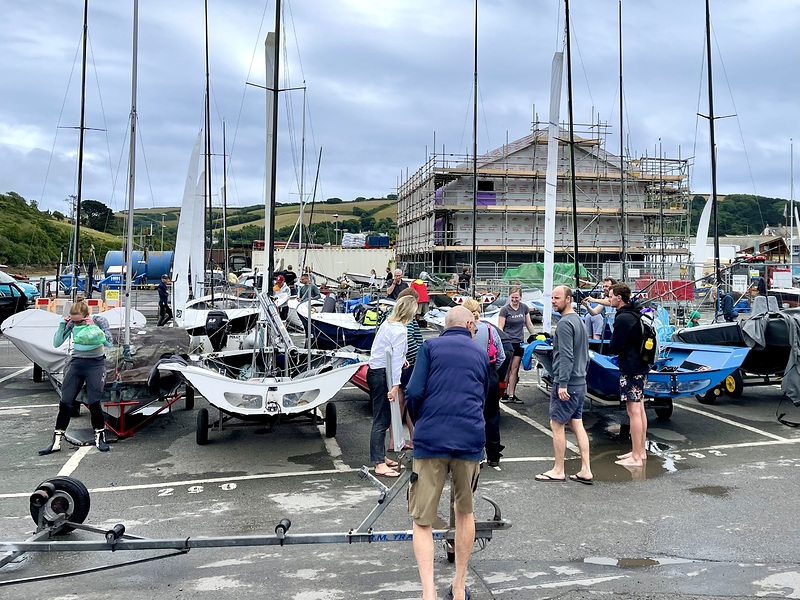 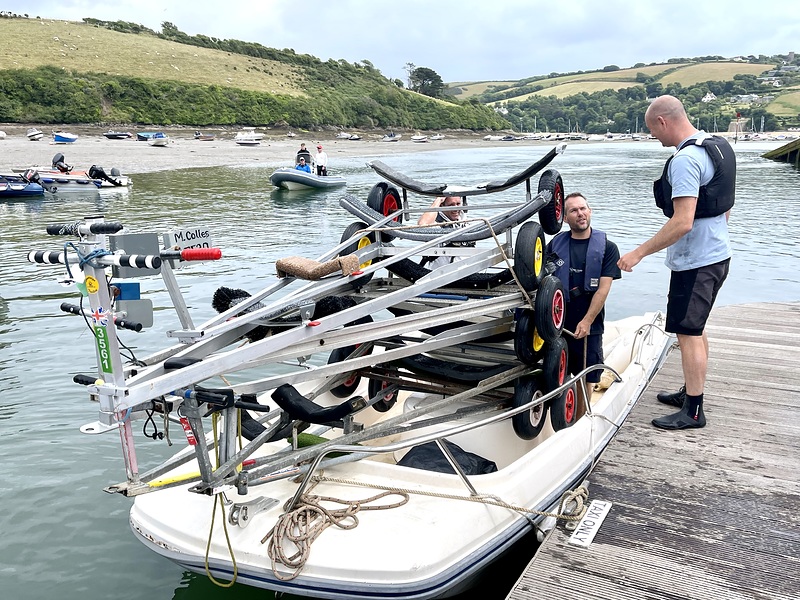 Sunday saw the first two races of this much anticipated week. Many a weather eye had been viewing the forecast NW wind with concern.  This is the worse wind direction at Salcombe as it comes straight over the hill on the town side. There is typically wind down harbour around Mark 1 and good breeze up the harbour but a bomb site of huge holes and wind from every direction, including vertical, on the start line.

Race officer David Greening took the only sensible option and sent the fleet down harbour, even if that wasnt consistently where the wind was coming from. With the start of the ebb tide under them, the fleet were a bit line shy allowing Caroline Croft and Faye Chatterton to get onto port and lead in pressure up the town side, to round Blackstone ahead of Andy Taxi Davis and Pippa Kilsby with Tim Fells and Fran Gifford giving chase. 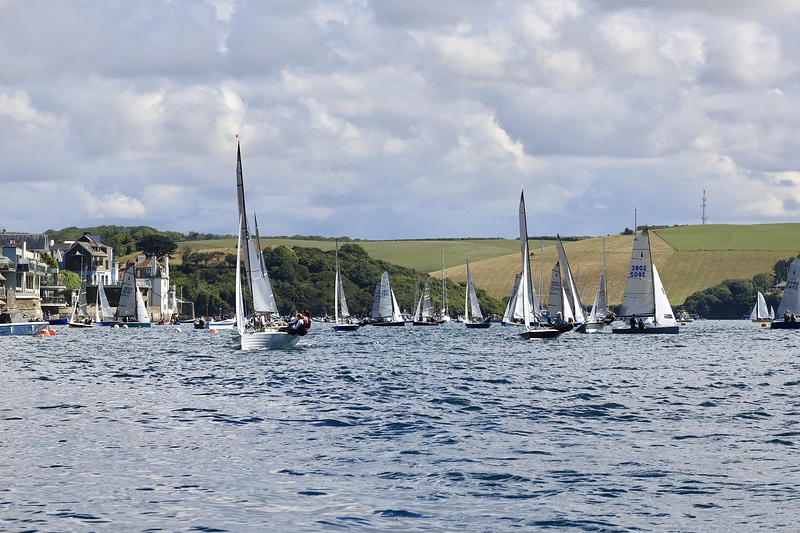 On the run, the fleet compressed with the chasing pack riding gusts down to the leaders.  By the Ferry landing there were about 15 boats fighting it out gunwale to gunwale. Ian Dobson and Ally Potts were the first into pressure coming out of Batson Creek to escape the pack and grab the lead at Yalton. 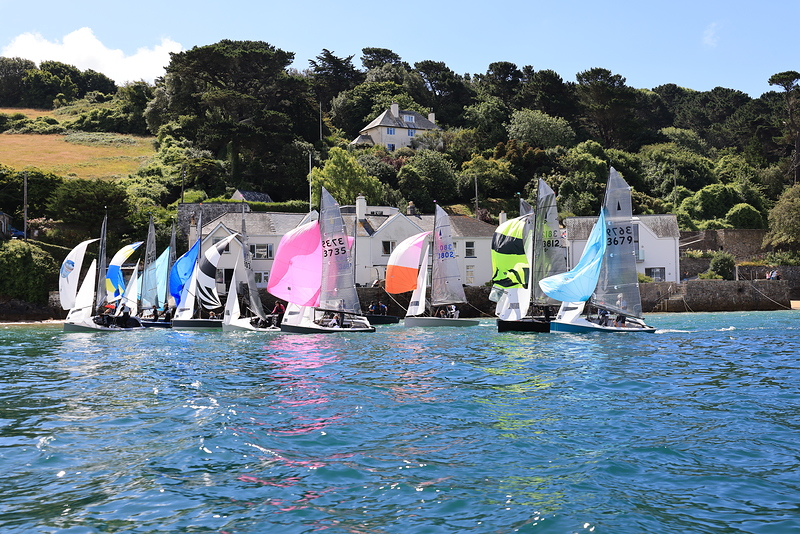 After a nice beat out of the Yalton, Ian and Ally got a bit low on the fetch out to Gerston, allowing Taxi and Pippa to hold height above them and take the lead which they extended, leading back to Blackstone ahead of Ian and Ally, Caroline and Faye, and Tim and Fran. 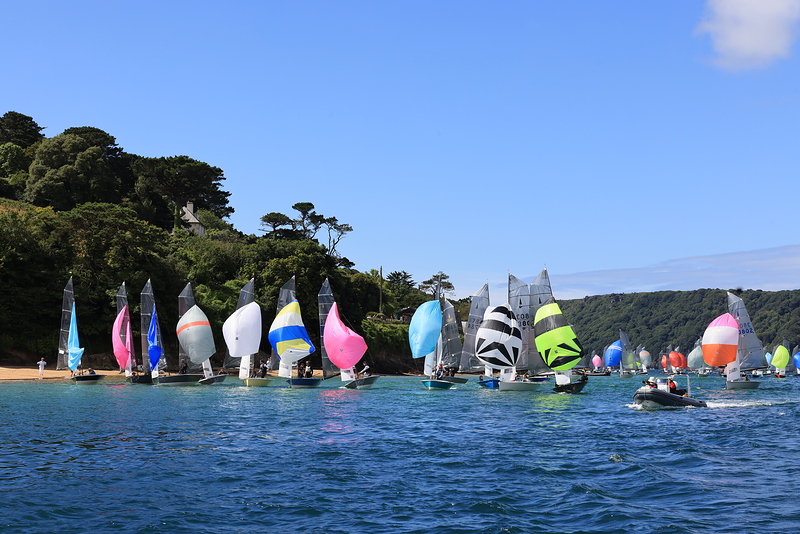 While Taxi and Pippa were far enough ahead to navigate their way through the minefield of the run/beat to the finish line and take their first bullet, the race was about to start again for those behind.  With strong gusts bringing a chasing pack of 15 boats up there were some big winners and losers.  Stu Bithell and Katherine Kimber hugged the shoreline to jump into second ahead of Ian and Ally. Jenny and Chris Dodds, Nick Heginbotham and Rory Gifford, and Steve Crook and Sally Townend all found their way through to take 4th to 6th. A strong representation of Hollingworth Lake in the top 6! 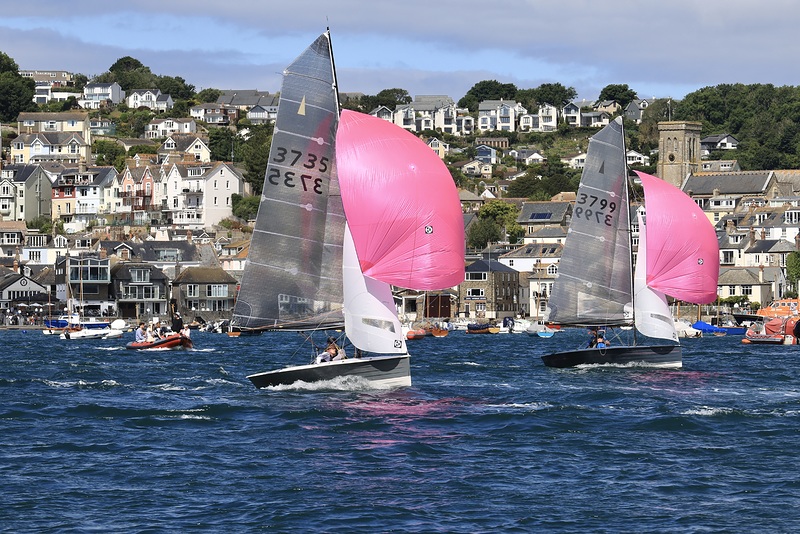 Bronze fleet was led home by David and Frances Bursey in 40th.

The sun was out and the breeze a bit more round to the North West for the afternoon race.  This meant that what breeze there was on the line was coming from the North and the start was set up harbour.  Although the town side was heavily biased, the Portlemouth shore had more breeze and less tide. George and Sophie Yeoman nailed the start to lead on the fetch up to the Bag. 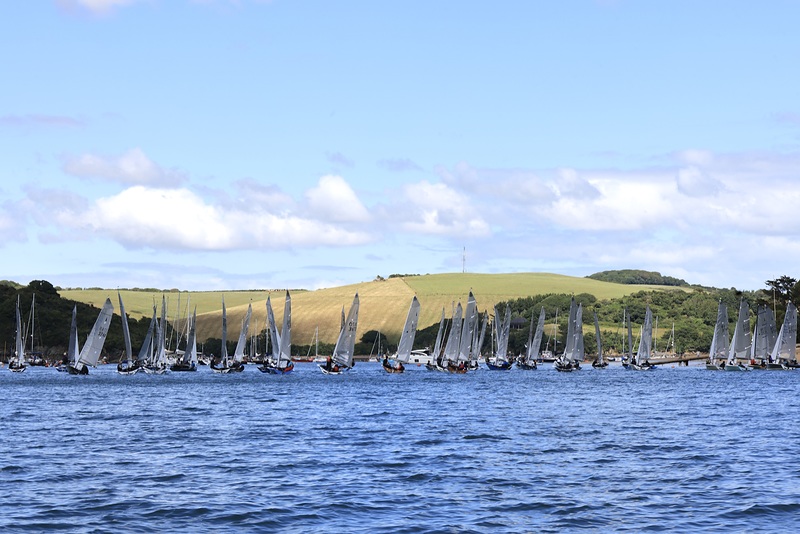 On the leg up to Gerston, Tom Gillard and Rachael Rhodes moved into the lead from Christian Birrell and superstar crew Luke Patience, with Matt Biggs and Becca Jones battling out with George and Sophie for third. 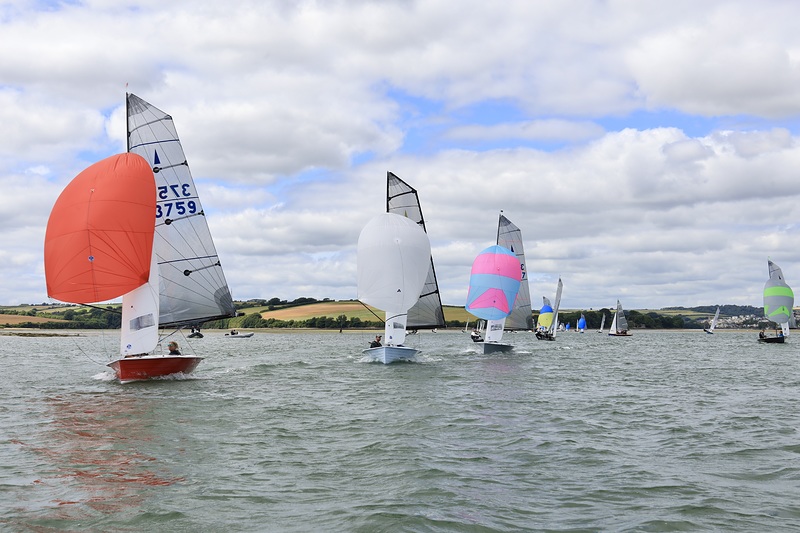 Despite the challenges of transitioning through the light airs zone at the start/finish line, these places remained the same although very tight. Christian and Luke briefly took the lead but Tom and Rachael re-established their control and came home comfortably ahead. Matt and Becca got the better of George and Sophie for third with Mike and Jane Calvert, despite a capsize on the last run past Smalls Beach, coming home fifth ahead of Simon Blake and Alex Jackson who had been climbing all race. 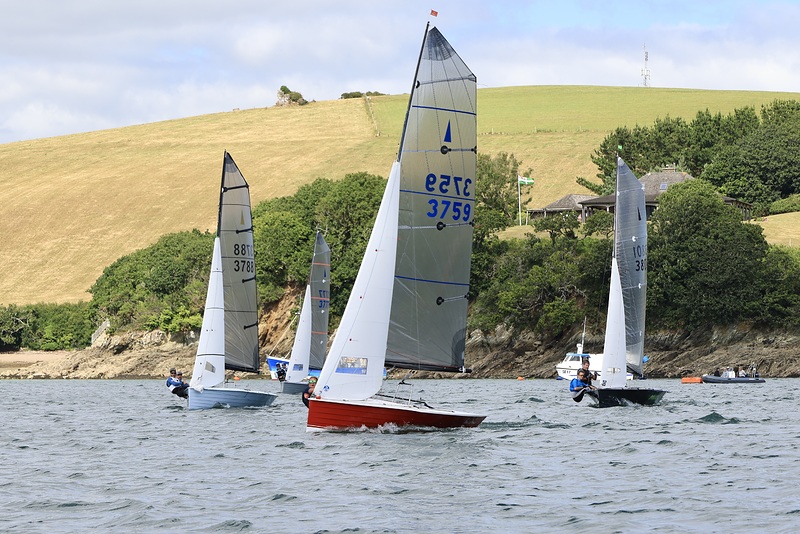 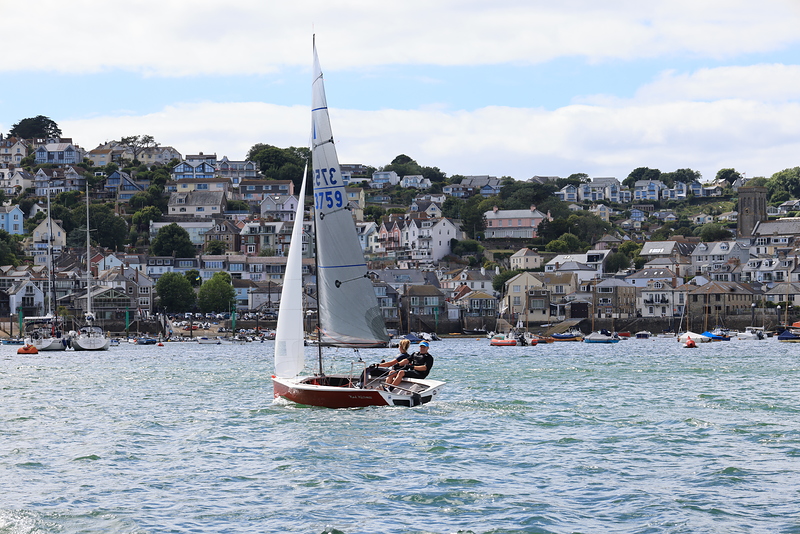 Top Silver Fleet performers in an excellent 7th place were Duncan Salmon (who won the week as a crew in 1986 and 87) and Ruth Hanstater. There was another top performance in Bronze fleet from Julian Harms and Richard Adams who came home 18th.

So, at the end of day one when conditions have been very challenging, the cream has already risen to the top.  The top four are the teams who would be considered the top four in the fleet.

Worryingly, the forecast looks like much the same for the next few days. A Race Officers nightmare, and not exactly what the sailors are dreaming of.  At least it will be sunny! 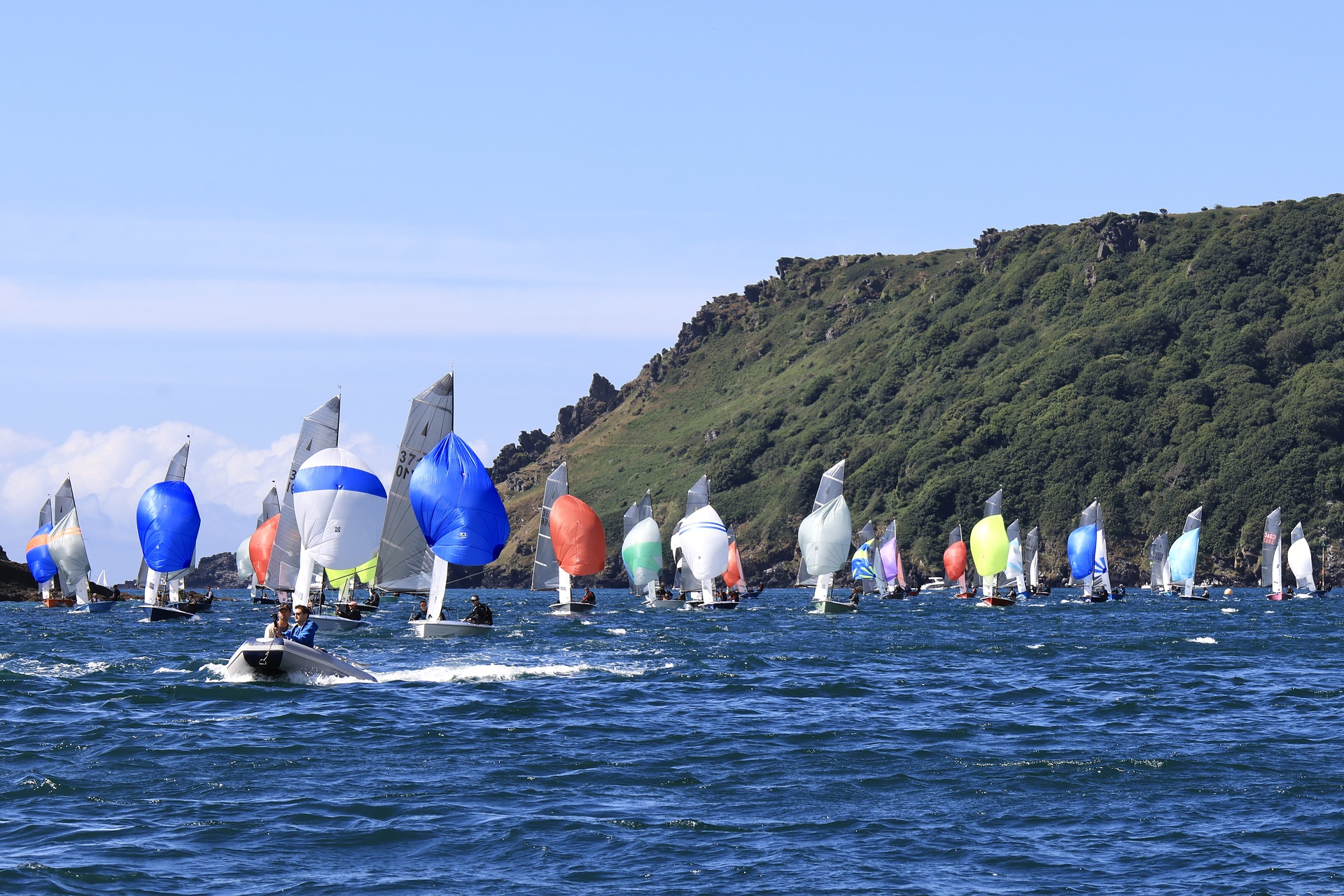