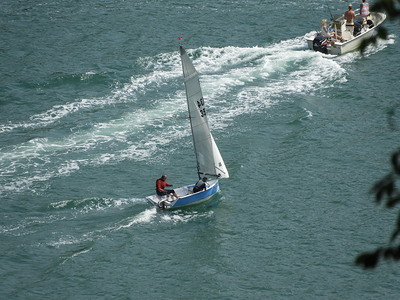 Before racing got underway on Saturday afternoon, Salcombe Yacht Club’s two new rescue boats were launched, named and blessed. The ceremony was attended by rescue boat drivers in their new Spinlock life jackets, a host of youngsters who had just finished their regular Saturday morning Cadet session, Father Daniel of the Holy Trinity Church Salcombe and Sally Hosking who named the boats Shirley Tyler II and Audrey Petit II. Sally was there representing her mother, Kath Stone, who along with Shirley Tyler started SYC’s Cadet section over 40 years ago. With the ceremony successfully completed, attention could move on the business of racing in the gusty 15 knot north-easterly. With low water occurring just after the start, Race Officer Andrew Wood’s options were limited and he set a beat to Crossways, a reach to and from Gerston followed by a couple of laps of the main Estuary. The sun shone, the breeze moderated a little and the racing was good.

Ben Meek continued his dominance of the Cadet fleet with another commanding victory with Charlie Evans and Dom Holt Wilson second in a club Quba and Henry Evans and Gus Howells third in another Quba. The Medium Handicap fleet now contains several recent graduates from the Cadet fleet and they are more than holding their own against the adults. George Alexander took the win in his Laser 4.7 followed by Emily Janzen in another 4.7. Father and son team Andrew and Lewis Groves were third in a Feva XL. The Fast Handicap fleet saw a guest appearance from Merlin Rocket stars Alex Warren and Mary Henderson, warming up for next week’s Sharp’s Doom Bar Merlin Rocket Week. They duly proved too strong for the rest of the fleet, taking a comfortable victory from the Phantoms of Ian Stewart and Bruce Hattersley.

With several of the fleet away at an event on Lake Garda, there were fewer Solos out than usual. Billy Jago recovered from a poor start by getting on the inside of the right-hand bend in the wind on the way to Crossways and soon established a lead, followed by Simon Yates. On the beat from Blackstone to Crossways Yates was caught by Malcom Mackley only for Mackley to round the mark the wrong way. Unwinding this error allowed Yates to reclaim second place and Andy Savell to move into third with a disappointed Mackley in fourth. In the Yawl fleet Martin and Cheryl Beck enjoyed a victory over Geoff Gilson and Chris Spencer Chapman in their Modern fleet boats with the Classic fleet boat of Barney and Juanita Greenhill in third.