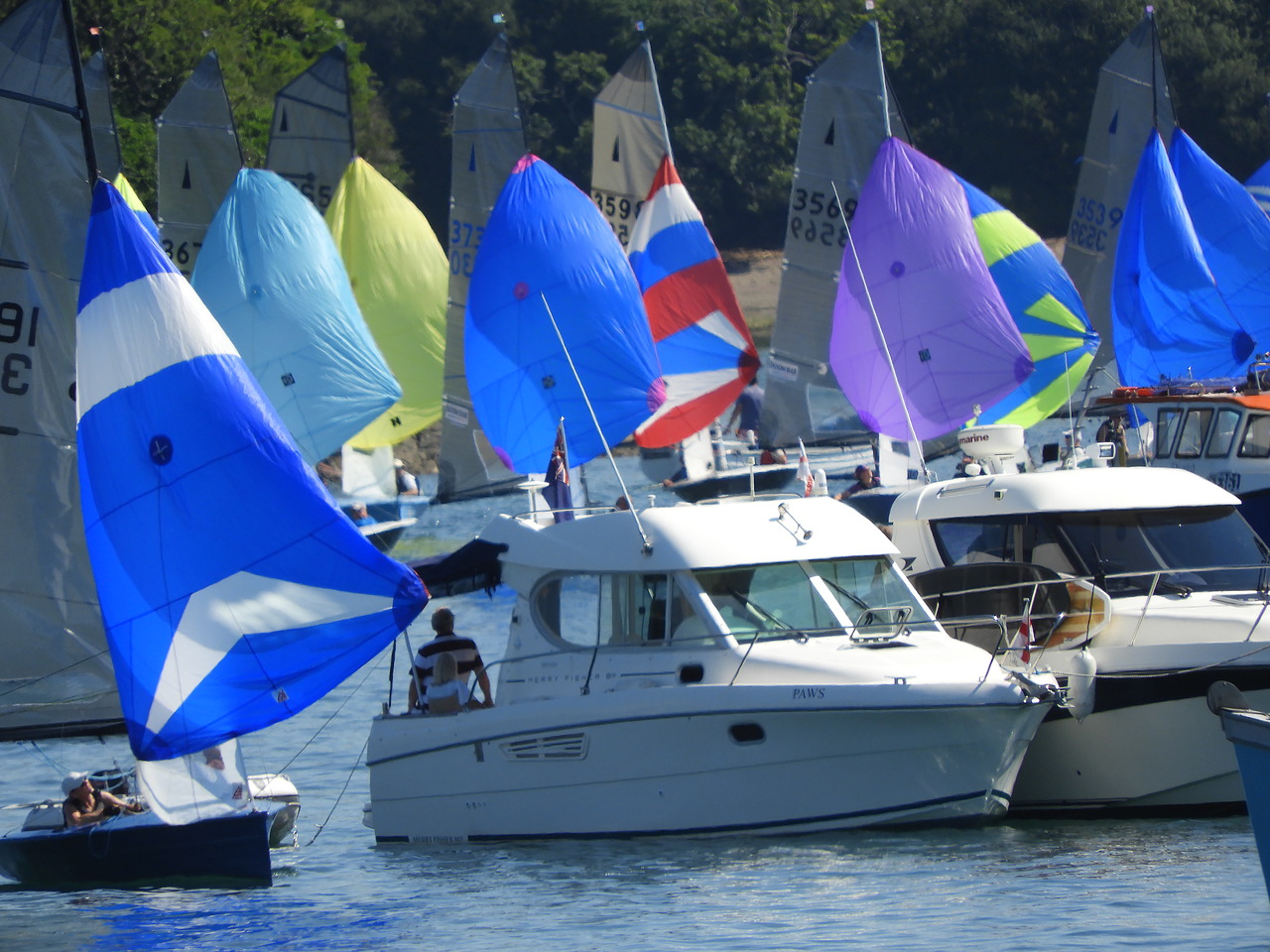 So, the long wait for the 61st running of the legendary Salcombe Merlin Week is over and racing has commenced.  Saturday provided a foretaste of what is to come with a day spent rigging, meeting old chums and moving boats over to Mill bay accompanied by wall to wall sunshine, an asthmatic northeaster in the morning being replaced by a tremulous sea breeze in the harbour for the afternoon.

There was sufficient Northeasterly in the harbour for PRO Dave Greening to confidently set the fleet off up harbour with a light flood tide under them.  However, lack of breeze elsewhere around the estuary combined with a lack of water meant that the fleet would be doing sausages up and down in front of the club.

The bulk of the fleet were noticeably line shy with the exception of Mat Biggs who in the excitement of winning pole position pulled his trigger way to early and was notified of his BFD after rounding Crossways in second.  Mike and Jane Calvert scorched up the first beat to round first ahead of a leading group notable for its seniority; Alan Warren third and Pat Blake not far behind.

On the run back the wind started to die leading to Mike and Jane crossing over to the town side in search of more breeze.  It was a move they would live to regret as those who hung on along the Portlemouth shore caught the first zephyrs of the sea breeze off Smalls Beach and a group of 15 boats pulled away on the new beat up to Blackstone.

Making the best of this were Chris Gould and Chris Kilsby who established a nice lead from William Warren and Maddy Anderson on the run back to Y.

There was only one more difficult patch to negotiate as the sea breeze line had barely reached Y in the Yalton Creek as the leading group approached with those behind bringing down more breeze.  The Chris’s snuck around Y and were then able to barely look back as the rich got richer.

The only final change in the leading group was when William and Maddy made a slow rounding of Y for the final time allowing Roger and Jane Gilbert to move through to second followed by Olly Turner and Holly Scott third.  William and Maddy took fourth ahead of defending champions Tim Fells and Fran Gifford who had done well to claw their way back to fifth.  Caroline Croft and Matt Lulham-Robinson rounded out the top six.

For the afternoon race the sea breeze had swung more to the SSE meaning that the favoured tactic was to start closer to the Portlemouth shore with the hope of getting onto port early.  A number of boats got their towels down on the sun loungers early and combined with the start of the ebb were unable to remain behind the line.  The subsequent bulge resulted in eight BFD starters and a few lucky to get away with it.

First to show up the middle of the track were the sisters Jenny Dodds and Pippa Kilsby who rounded Blackstone with a big lead.  Unfortunately, they were first to be pulled by the Board of Death followed by Jon Turner, Ian Sharps, Alex Jackson and Dave Winder from the leading group.

This cull left Will and Mary Henderson leading on a tricky track up to Yalton.  All the good money was on the local hero extending away from the pack but Christian Birrell and Sam Brearey played a blinder to take the lead followed by new kids on the block Nick Charles and Christian Humphrey.

The race then settled down to be relatively processional with Christian and Sam extending away to a comfortable win that puts a real marker down for the week.  Nick and Christian, although allegedly having barely set foot in a Merlin before, showed real class to hold a very composed second until the final stages of the last run when Will and Mary showed their local knowledge to pass them off Ditch End and hold second to the line.

In fourth were Taxi and Alex who recovered from a conservative start to pull through for a solid counter in what looks like being a high scoring week.  Tim Saxton and Jodie Green were a solid fifth ahead of the recently remodeled ‘Superfast Jellyfish’ which having had a major weight loss program and in the capable hands of Si Blake and Phil Dalby, rounded out the top six.