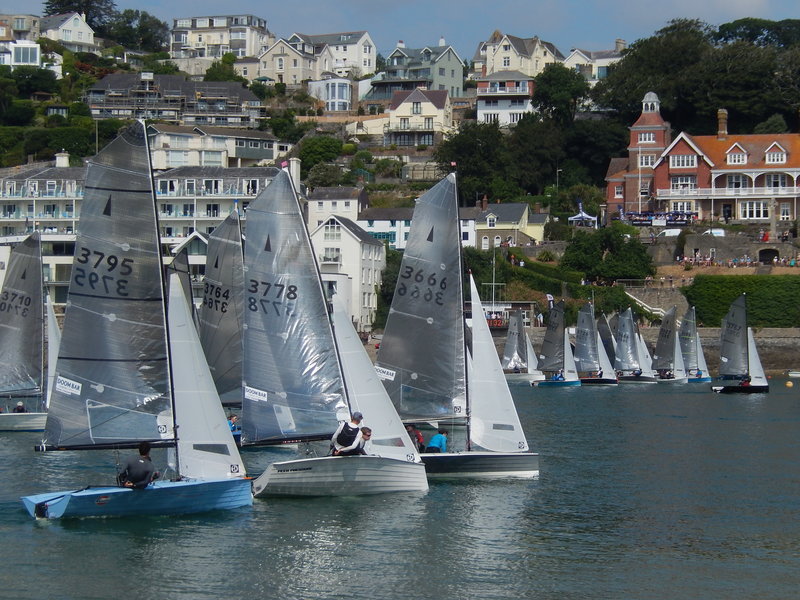 After the highs and lows of cheering on England, there was a slightly slow start to the day, not enlivened by any sign of a breeze.  There was the briefest hint of a sea breeze forming but a lot of teams elected to walk their boats from Mill Bay to the start line.

As if on queue, a pleasant Easterly arrived just in time for PRO Scud Stewart to make his course decision sending the fleet against a strong spring ebb tide up to Crossways.  With a lot of starboard hand in the breeze, the Portlemouth shore was the popular place to start, but those with their eyes up the track could see that there was good breeze and tidal gain on the Batson creek side of the course.

Starting closer to the town end of the line, Steve Crook and Sally Townend nailed the first beat, holding a great line up to Snapes, picking up the tidal lee bow tod tack across and take a nice lead around Crossways.  Taking the same route and rounding second were 82 year old legend Alan Warren and Will Carroll, narrowly ahead of his recently acquired daughter in law Sophie Mackley and Tom Ballantine.

On the run down the harbour, Tim Fells and Fran Gifford who had rounded fourth found a bit more pressure on the town side to sail around the leading group and take the lead at Blackstone and were then able to hook into nice pressure to extend a good lead on the tricky beat against the tide back to Crossways.  Sophie and Tom settled into a comfortable second ahead of Alan and Will in third.

While the wind had some tricks to play with the sea breeze starting to come back into the harbour, the leaders were able to complete the course without further position changes, Tim and Fran taking a first bullet of the week.

Steve and Sally in fourth had their hands full with a group of boats including a number of the front runners nibbling at their heals.  They managed to defend despite having to navigate the transition zone which had reached Mill Bay mark as they were rounding.  Mat Biggs/ Becka Jones jumped up into fifth at the death, ahead of Will and Mary Henderson.

The afternoon race turned out to be possibly one of the worst on record.  For those taking part it was tortuous beyond belief and for those watching it was a case of Schadenfreude to the extreme.

The breeze had become very light and was easterly up harbour and southerly to non existent down harbour. The tide was flooding strongly.

The start was clean and both leading contenders, the Calverts and Taxi/Alex, timed perfect starts in the middle of the line with the strongest stream under them.  They led around Crossways onto what was to become an incredibly challenging run then beat to Blackstone.  The worst point was the end of Biddle Rocks on the approach to Blackstone where the strong tide was washing each boat that approached back up the course.  It took the leaders a long time to find enough pressure to break through but the majority of the fleet got locked up there for at least half an hour!

Once the leaders made it around Blackstone they had a tidal supported run/drift/beat to Crossways, followed by a run back to the Ferry where the race started again. There were six boats interchanging the lead on every little bit of pressure, with gains being made by following the wind out into the tide but risking a shut off and being swept back up harbour.

Finally, Olly Turner and Holly Scott managed to get around Mill Bay mark and looked set for a win.  Alan Roberts and Rob Henderson were chasing but behind them Dave and Oliver Winder hoisted their kite and sailed through underneath the leaders to take their first bullet. Mike and Jane Calvert, who had done so well to hold the lead for the majority of the race, had to settle for fourth.

William Warren and Maddy Anderson along with Jenny Dodds with sister Pippa Kilsby ignored the temptation to chase the breeze out into the tide and continued up the shore until well into Mill Bay before tacking out to Mark 2, rounding in fifth and sixth and holding those positions to the line.

Overall, with discard Mike and Jane are in a controlling position, requiring fifth or better in the Friday morning race to take the title.  Four other teams could win if Mike and Jane have a calamity; Taxi and Alex, Si and Phil, the Chrises and Tim and Fran.