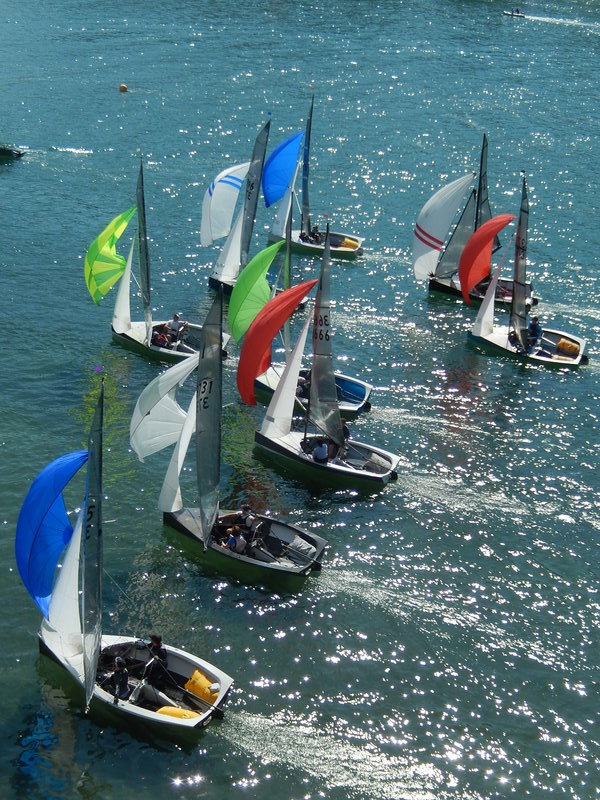 The final day brought further wall to wall sunshine with a light southerly sea breeze cell in the harbour.  First of the title contenders to line up were Mike and Jane Calvert and Si Blake/Phil Dalby.

With a full spring ebb tide underneath them, the fleet lined up cautiously and it was only Alan Roberts and Rob Henderson who jumped the gun.  Si and Phil got a nice start in the middle of the line and were soon away onto port leading up the course.  Mike and Jane by contrast played things too conservatively and were left boxed in and struggling for air.  Si and Phil led around Blackstone and immediately gybed for the town side, while second place Caroline Croft/Mat Lulham-Robinson and Roger and Jane Gilbert took the Mill Bay route.  The Calverts struggled around in the forties.

For the next two laps, there was little to choose between town side and Portlemouth side on the runs and the beats were fast with the tide underneath.  Si and Phil held a comfortable lead until caught off Mill Bay on the last run.  They held their nerves to gybe back down the Portlemouth shore as their chasers crossed the tide and were rewarded with new pressure allowing them to cross clear ahead after the Ferry landing.

From there on in it was plain sailing with Si and Phil taking the bullet that puts them in a commanding position at the top of the leaderboard, Taxi and Alex needing to win the afternoon race to take title.

Roger and Jane got the better of Caroline and Mat to take a well earned second and move them right up the leaderboard.  Jon Ibbotson and Nick Copsey had their best result of the week in fourth ahead of long term N12 rivals Will and Mary Henderson.  Boris Heginbotham and Zoe Parry claimed an excellent sixth.

The final race of what has been a challenging light airs event, saw the best conditions of the week.  A force 3 Southwesterly sea breeze sailed under a bright blue sky was what the competitors had come for.  With the Spring flood tide starting to run, there was a clear choice between the two shorelines.  Chrises Gould and Kilsby won the Portlemouth shore while Tim Fells and Fran Gifford won the Town side.  They came together at Biddle rocks with the Chrises taking a narrow lead onto the run.  Dave and Oliver Winder rounded third but were BFD, putting Taxi and Alex in the chasing position.

The Chrises lead around Salstone but on the beat back it was Tim and Fran who came through to take a good lead up the Town side, followed by Taxi and Alex.  The Chrises were the only team to cross over at the fuel barge and made big gains to retake the lead at Mill Bay.  From that point they were relatively untroubled until the final beat to the finish when they took the Town side.  Tim and Fran took to the Portlemouth shore and were making gains but ultimately came up a few boat lengths short.  Taxi and Alex took third ahead of a fast charging Chris Jennings and Oli Wells followed home by Christian Birrell and Sam Brearey and then Jenny Dodds and Pippa Kilsby.

The Chrises took their third bullet of the week and will look back on a couple of races that slipped away which may have given them the title.  Their win meant that Taxi and Alex had to accept another bridesmaid finish, with Si Blake and Phil Dalby being crowned champions.  In Si’s case, this is his third title but it is a first one for Phil.  Their win in the Jo Richards designed ‘Superfast Jellyfish’ is the first time the Canterbury Tales design stranglehold has been broken for many, many years.

Despite the challenging sailing conditions, the week has been another wonderful week with exceptional summer weather.  Many thanks to Salcombe Yacht Club for their expert race management and hospitality and to our main sponsors Sharp’s Doom Bar and Magic Marine.

Entries are now open for the 2019 event which will be subject to a ballot later in the summer.