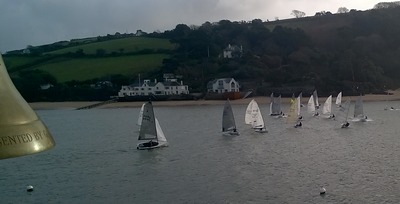 The recent run of poor weather relented enough for a very competitive Festive Series race to be played out on a feisty and overcast 22nd December Saturday morning. Twenty five boats answered the single start handicap race and most of the fleet expertly lined up at the start gun to embark on a gusty first beat to the Blackstone mark at the mouth of the estuary. There were capsize casualties right from the beginning of the race and progressively several dinghies retired with the safety boats being kept busy throughout the race.

Team Henderson were in town, or should I say emerged from the Portlemouth “Dark Side” of the estuary where they are based. Will Henderson crewed by Arthur were first around Blackstone mark followed closely by Mary Henderson crewed by Alex Warren. Both of the Merlin Rockets held a slender advantage over the Phantom of Alistair Morley, who true to form had engineered a late arrival at the start line. A third Merlin Rocket sailed by Simon and Laura Evans was well placed and were surrounded by an excellent turnout of Solos with David Greening, Simon Dobson and Billy Jago having a fantastic tussle at the front of the fleet.

The race was then kept within the view of the race box and involved several loops between Scoble Point and Millbay. There were many dramatic capsizes with various excursions to the beach in order to repair body or boat.  No masts were broken although several boats spent a considerable time extricating their upturned dinghy masts from the bottom of the estuary in the low water conditions of the race.

The expertly sailed Merlins and Phantom set a cracking pace at the front of the fleet and David Greening eventually won the Solo battle after some pressure was relieved when Billy Jago’s tiller extension snapped at a crucial moment. At the end there were only fourteen finishers left with notable finishing performances further down the fleets from Stuart Cartwright and Tris Squire in their Solos and Ru Mcoll, one of the clubs younger generation talents, surviving to finish in his Laser Radial. Special mention should also be given to Simon Ballantine who during the periods when upright, expertly sailed his new Aero for the first time to a creditable finish and also Rob Langley who subjected his son Edwin to a crewing baptism in a little Feva and where both came ashore with a smile.