Start times for the Autumn Series beginning September 5th are Handicap fleet 14.00 and Solos 14.20. An amended NoR has been posted. 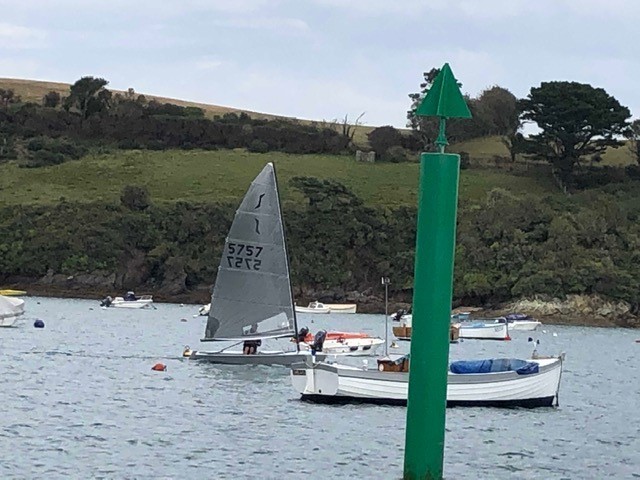 The wind direction at the start of racing on Saturday presented a conundrum for Race Officer Andy Postle and his team. Easterly with a touch of south in it meant that although there was plenty of breeze out at sea, in the Harbour on the Club start line conditions were very light and variable. One moment there would be a gust coming down from Yalton but the next would see the wind puffing in from the south. The Race team elected to send the fleet off to the north against an ebbing tide and this proved to be a good call. Once the tricky first two hundred yards had been negotiated, the fleets beat to Crossways in a strengthening breeze. From there it was a broad reach to Gerston and a fetch back. By the time everyone returned to the main harbour for a couple of laps of Blackstone and Crossways, the wind had backed a little to the north and was blowing more consistently down the harbour although there were still a few patches of calm down by Blackstone.

In the Cadet fleet George Alexander made it two wins in a row ahead of Ethan Jones. In the Medium Handicap, Tim Fells pulled off the same feat in his Aero, ahead of Ben Meek in a Laser 4.7 and Andrew and Lewis Groves in a Feva XL. The Fast Handicap fleet for once saw the Merlin Rocket of Graham and Fiona Cranford Smith get the better of the Phantoms who were lead home by Olly Alexander. Meanwhile amongst the Yawls, Jon and Clare Lewis beat Peter Stratton.

In the Solo fleet Simon Dobson lead off the start line but Billy Jago got the better of the early shifts to lead around Crossways. Dobson was able to stay close enough to claim an inside berth around Gerston and pulled clear coming back through the Bag. Ed Stephens had come through to third by this stage. Simon Yates, meanwhile, was beginning to sail through the fleet after a poor start. On the last run Yates took advantage of a nice gust to close the gap on Jago and Stephens. These three had a great battle on the final leg short-tacking up the town shore, Jago just managing to keep Yates behind him at the end with Dobson a little way ahead in first.