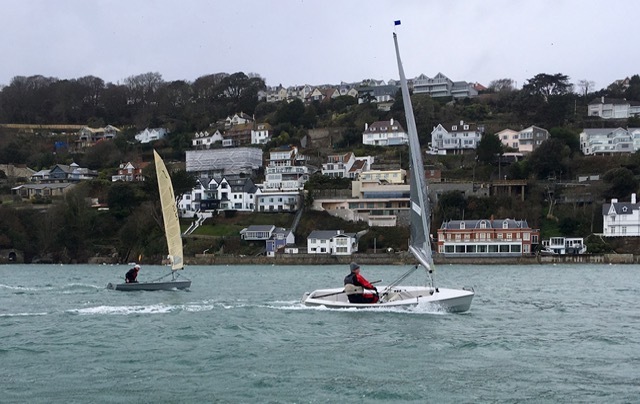 The first Saturday of the Christmas recess marks the opening race of the Salcombe Yacht Club Festive Series.  Race Officer Barney Greenhill set a course which offered something to everyone, with 30 knot southerly gusts at Blackstone and near drifting conditions into South Pool creek.

The RS400 of Peter Colclough and John McLaren led off the line on the Town side into the flood tide, pursued by the National 12 of Mike Hoyle and the Solos of David Greening and Simon Dobson.

When the fleet crossed to Biddle Head great care had to be exercised to tack on top of the massive rollers to avoid being knocked back onto the rocks.

The RS400 built up a good lead out of Yalton, still chased by the National 12, with the leading Solos swapping tacks.

The last part of the race comprised two rounds of the harbour into the building breeze; by this time Graham Cranford Smith had recovered from an unexceptional first beat up the Portlemouth shore to overtake Dobson and draw in on Greening, for what was to turn out to be the race for the top three positions on corrected time.

Greening was able to make a couple of good lays to the Millbay mark, which sealed the race win from Cranford Smith and Dobson.

Boxing Day dawned for race two of the SYC Festive series; the forecast southerly gale force winds were to make for exciting Boxing Day beach walking but in the RO Chris Cleaves opinion conditions were far too marginal for dinghy racing, so the race was abandoned.

Will and Arthur Henderson having made the long trek from East Portlemouth decided to go out sail testing, only to validate the ROs decision by capsizing their Lark in front of the clubhouse.

So New Years Day was to be the decider.  The tempestuous seas of Boxing Day had given way to a glassy calm harbour, with a building ebb tide, and a hint of wind from the north east.  RO Chris Cleaves set an optimistic Crossways Blackstone Crossways Blackstone course, having spent much of the winter researching the course setting possibilities.

The twelve strong fleet set off from in front of the Watchhouse progressing to the remains of Jubilee Pier and its handy handrail stepped out into the tide, which they attempted to round for half an hour or so.  Dan Bridger in his Aero and Ben Meek in a Solo made it around only to make no headway through the main anchorage being in the lee of Snapes point, whilst the National 12 of Mike Hoyle and Sian Hodges made an early bid for the 2020 Capsize Belt.

At this point most of the fleet crossed the harbour to try their luck at stemming the tide at the Portlemouth ferry landing, with several boats ending up involuntarily kedged on the Ferryside running moorings.

Eventually the RO had seen enough, stating When I saw the once race leader drifting backwards through the start line after forty five minutes of racing, time to give the abandonment flag an airing I thought, enabling the sailors to resume the New Year festivities at the SYC bar! 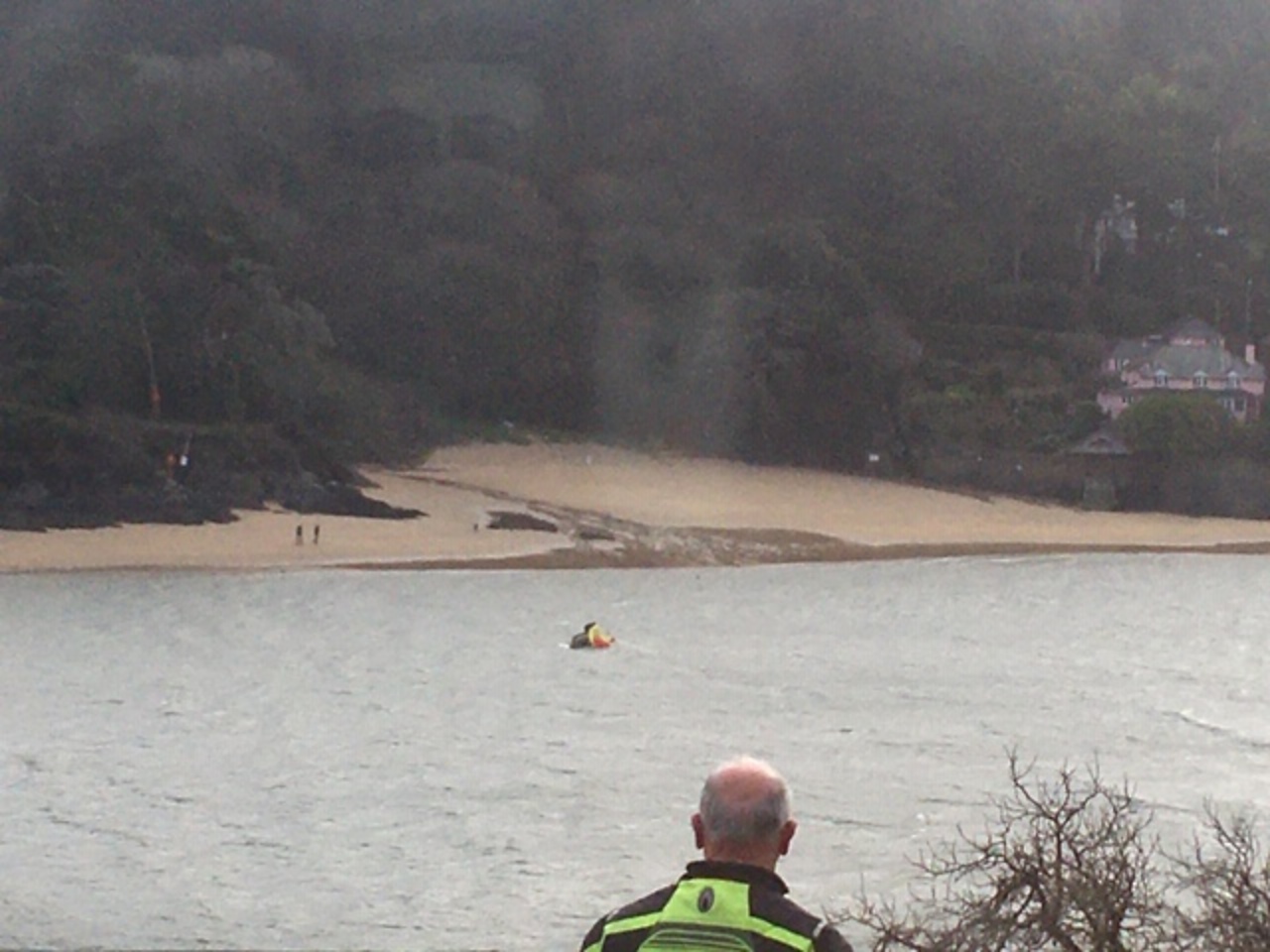 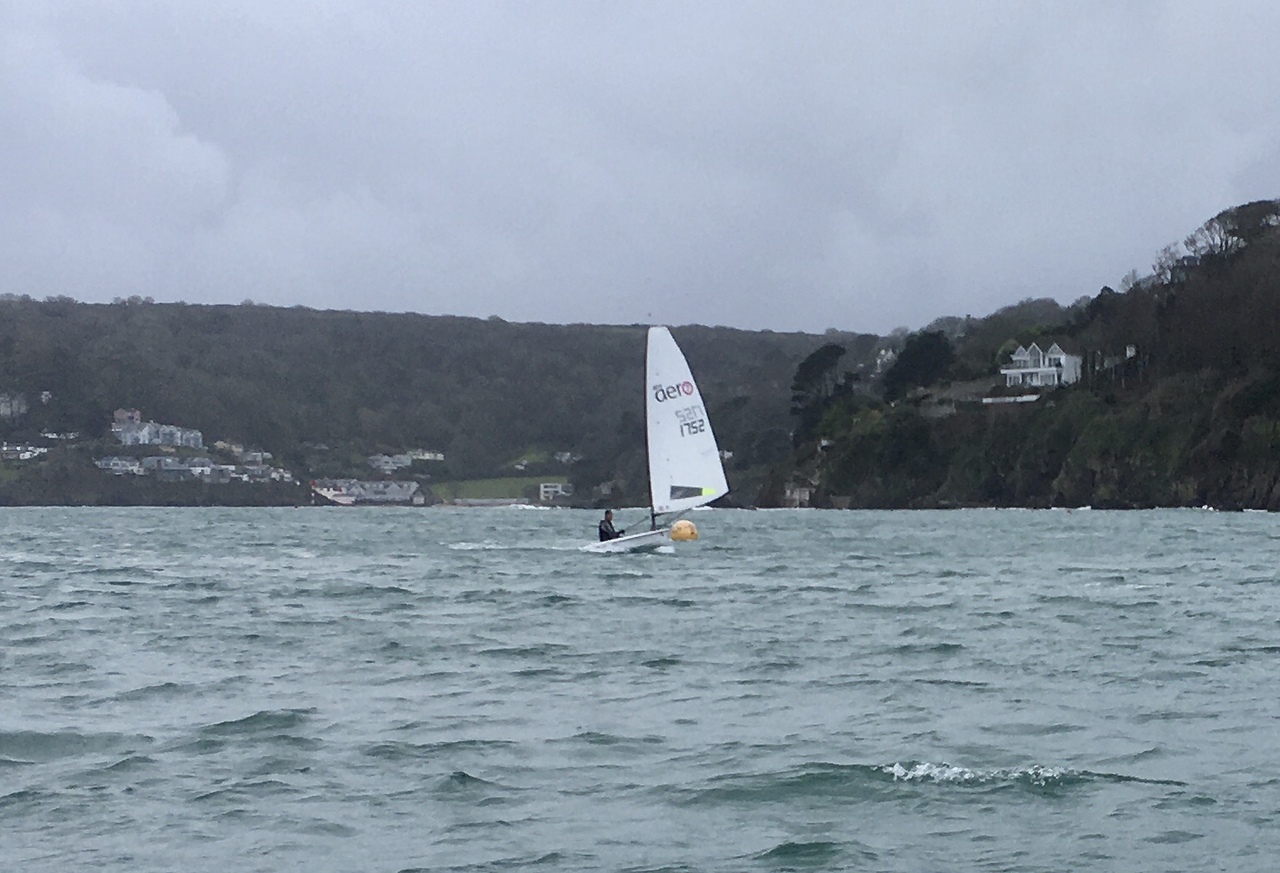 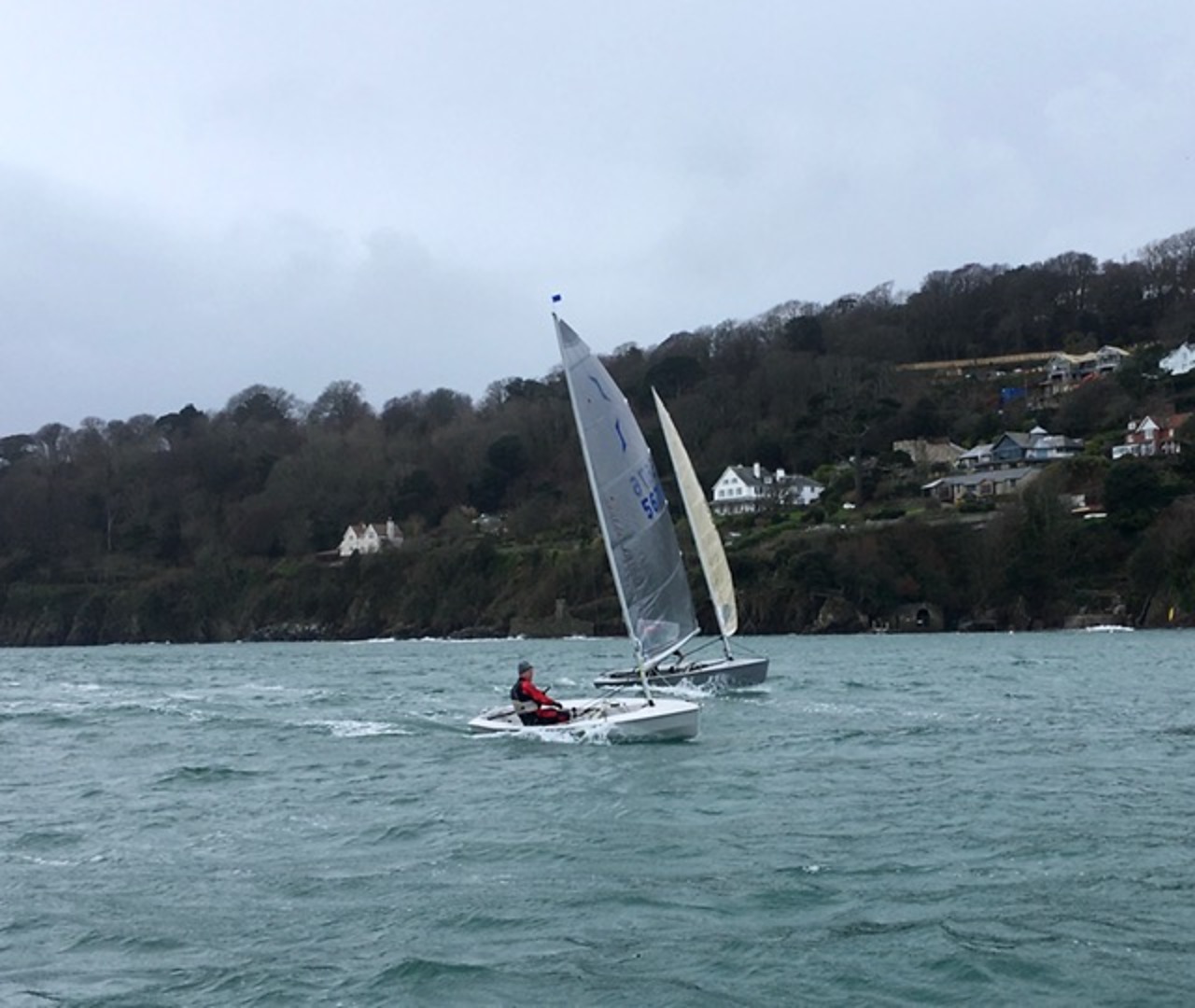 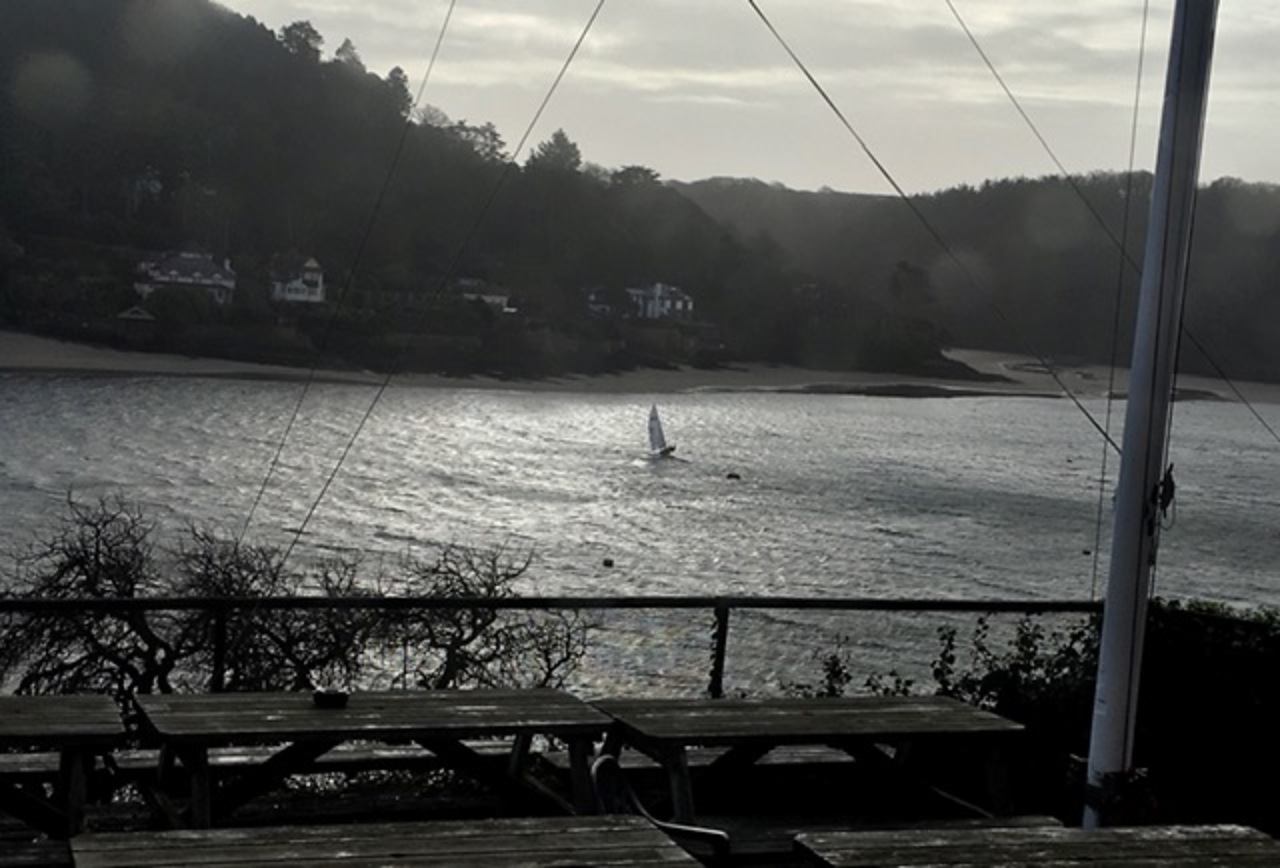 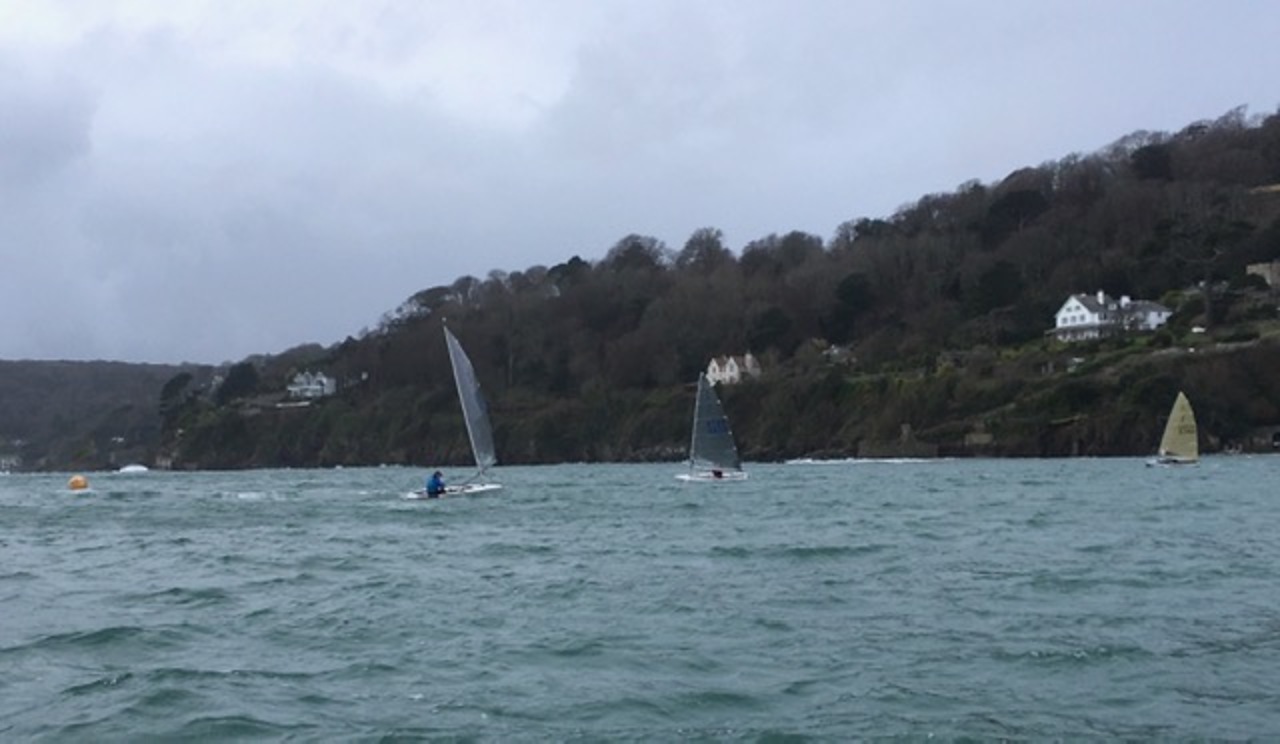 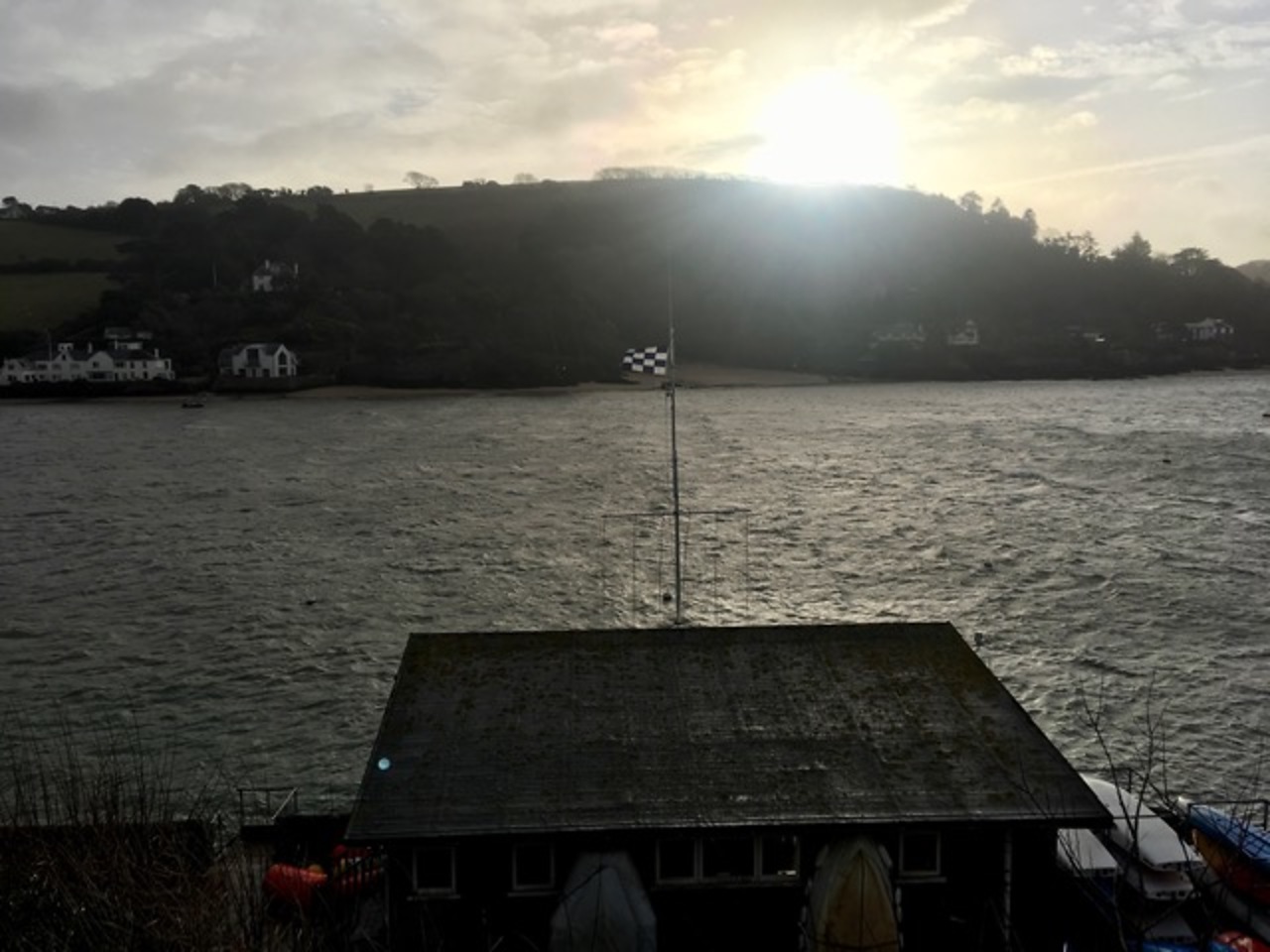 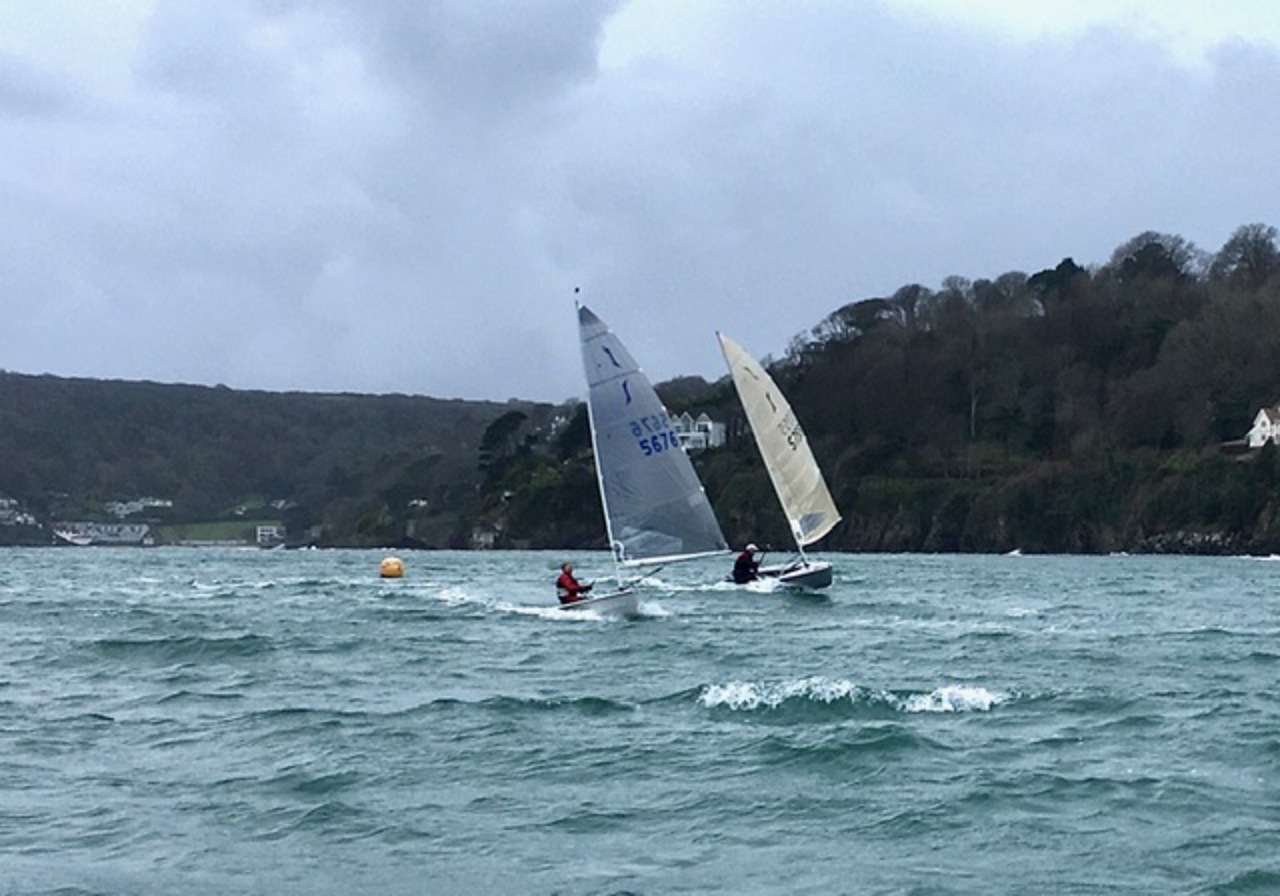 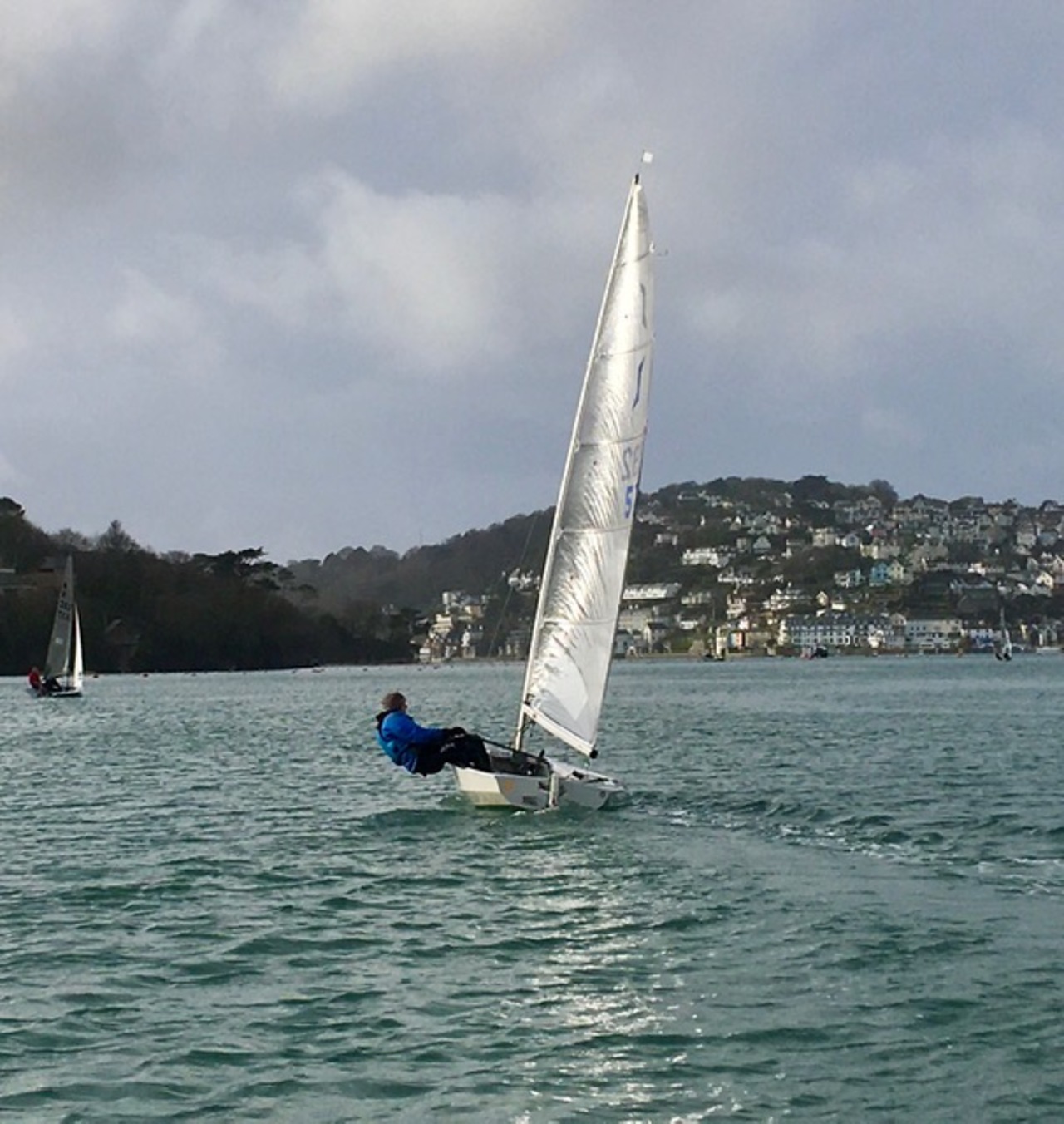 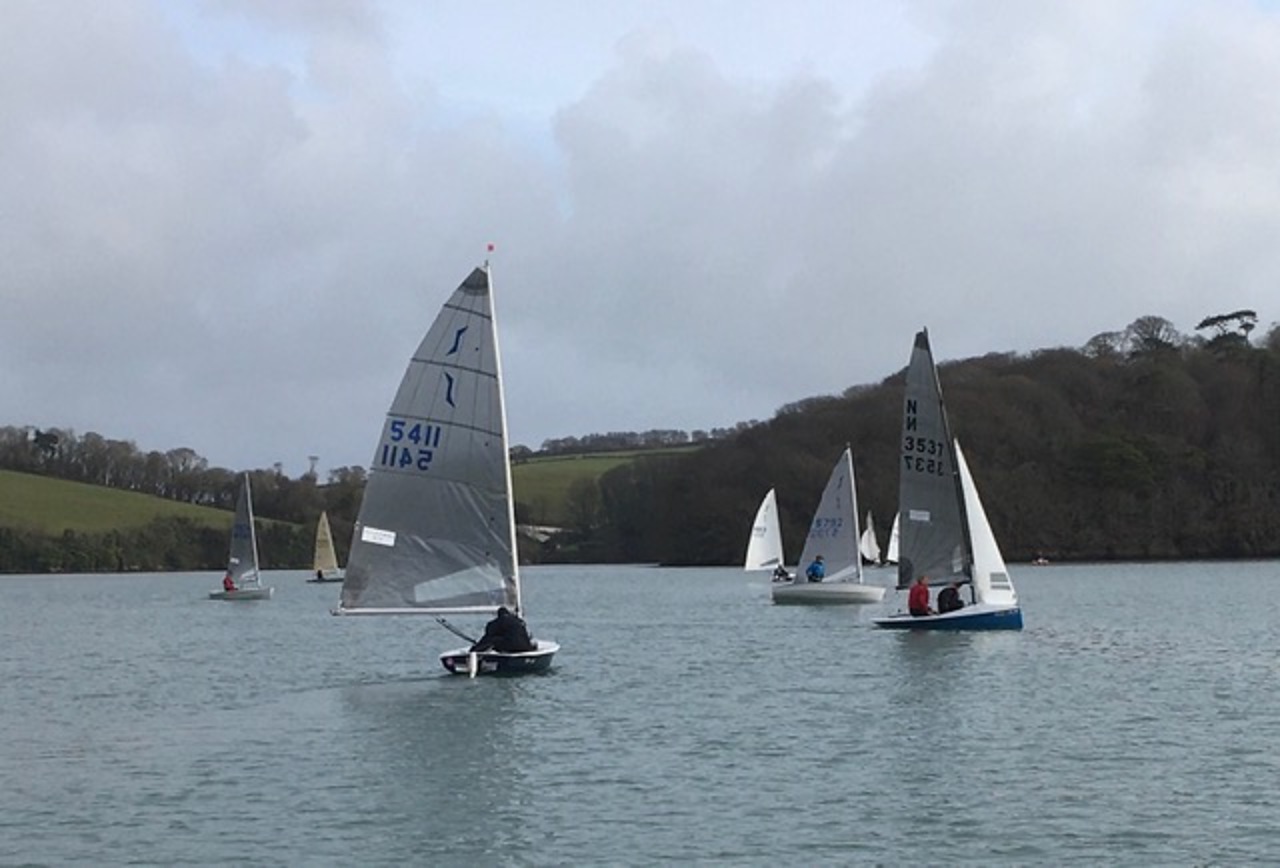 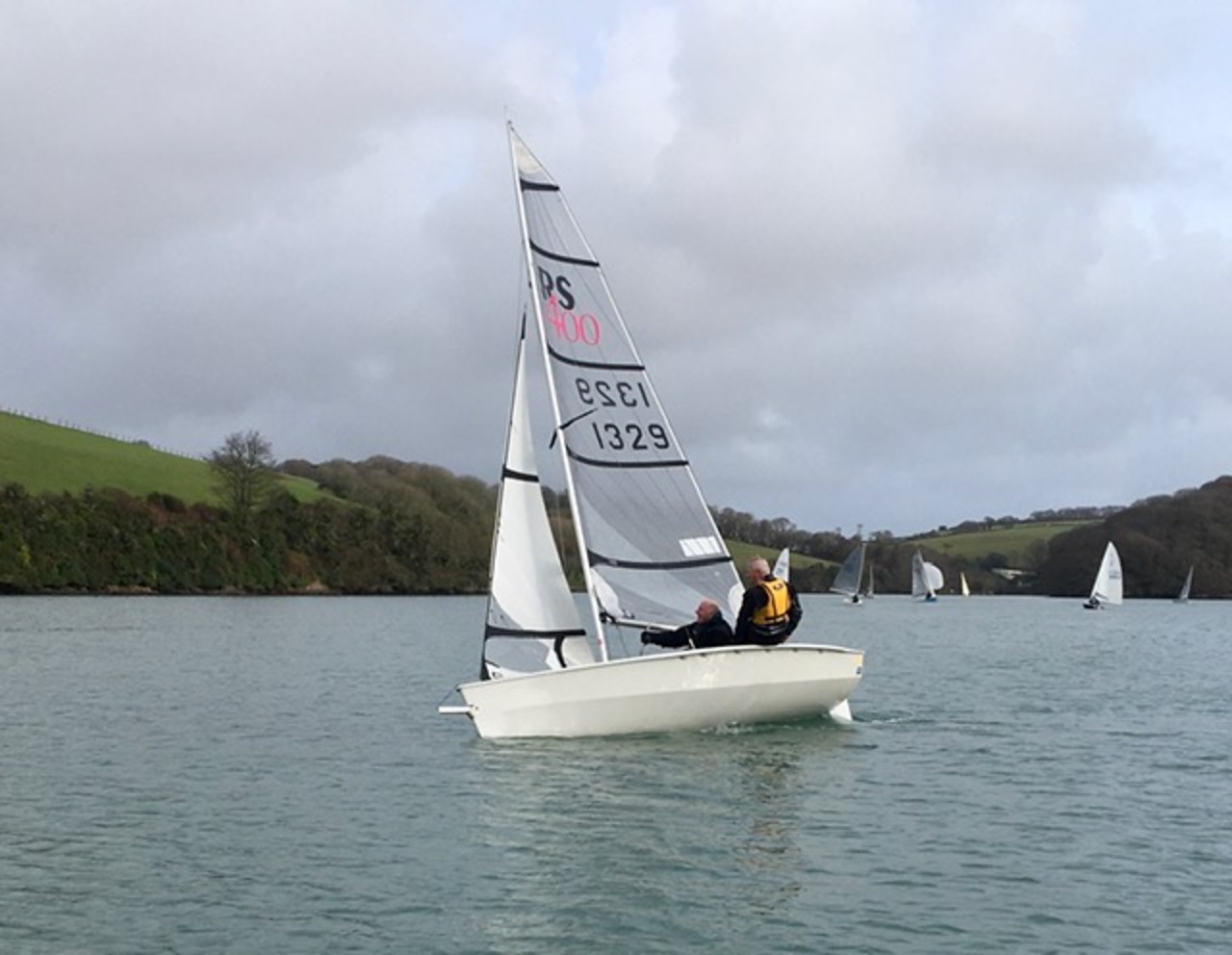 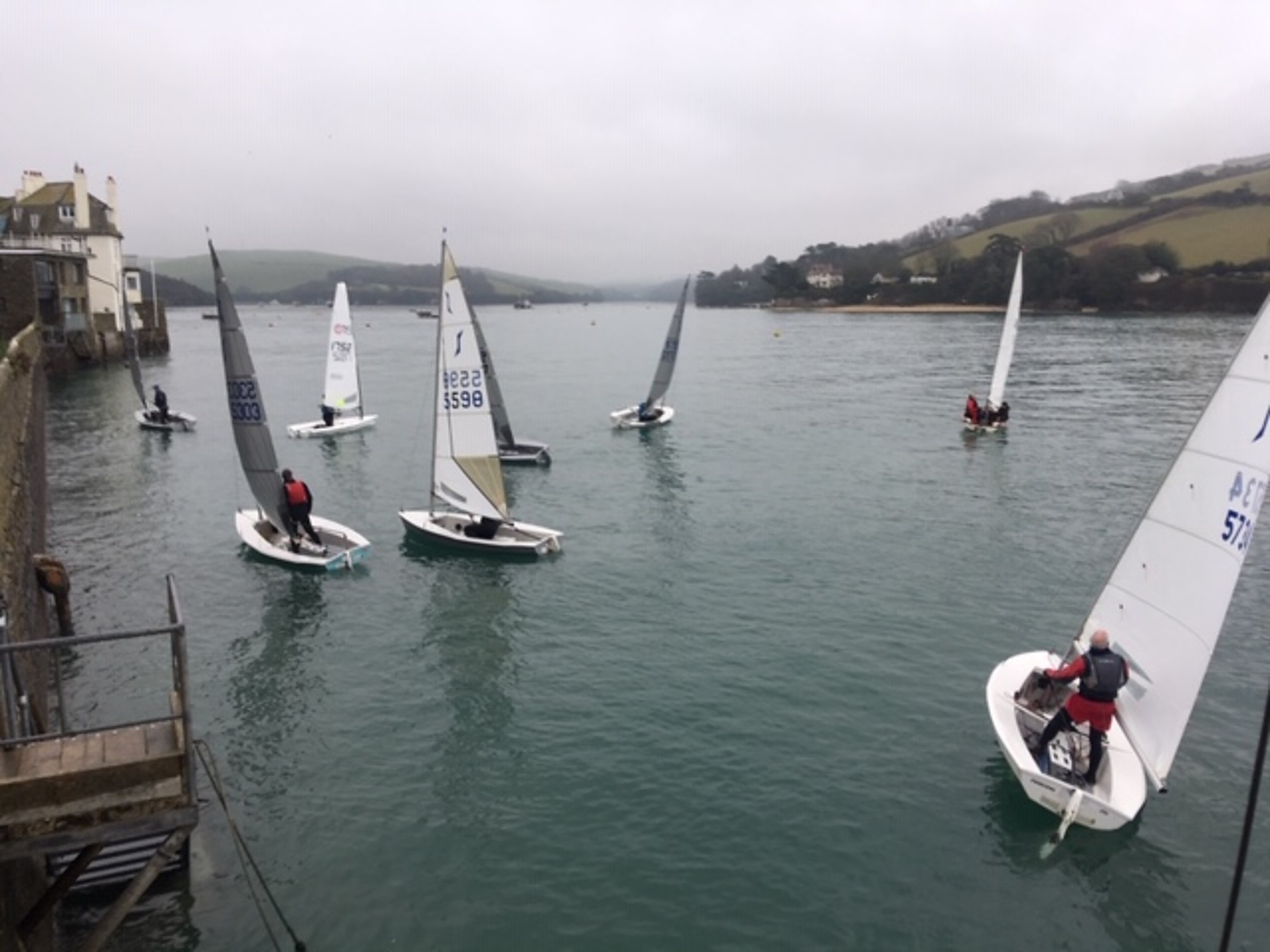 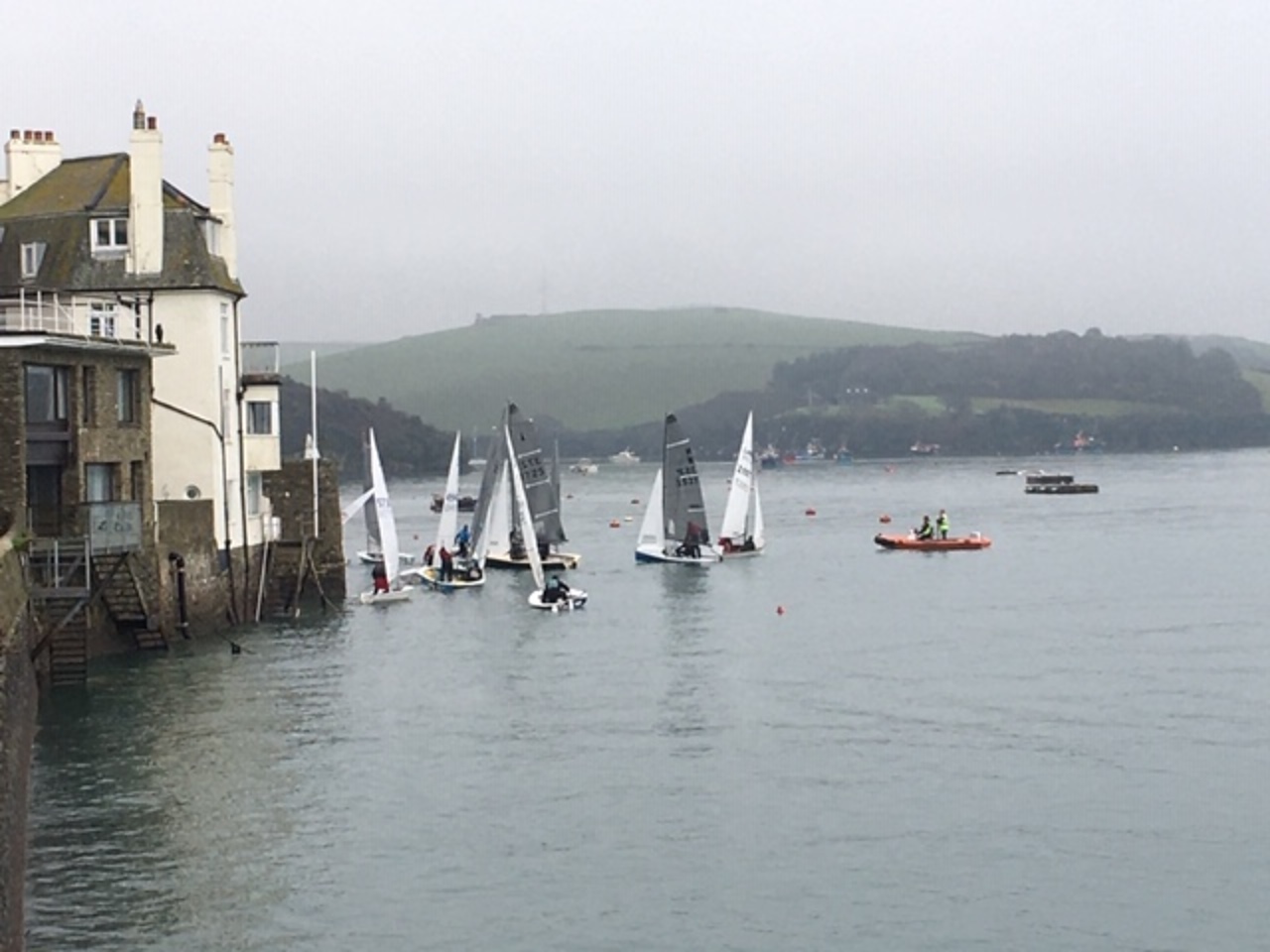 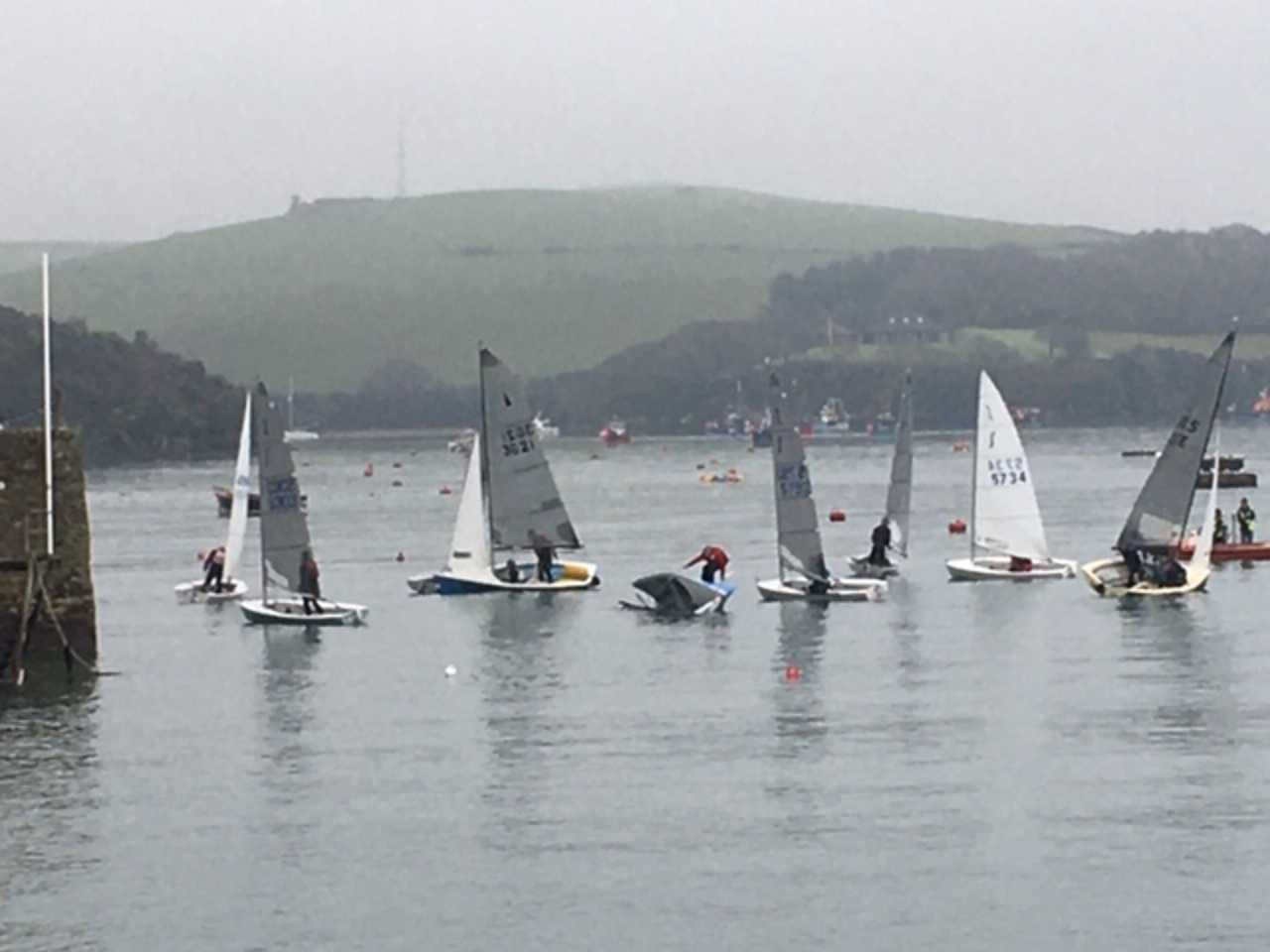 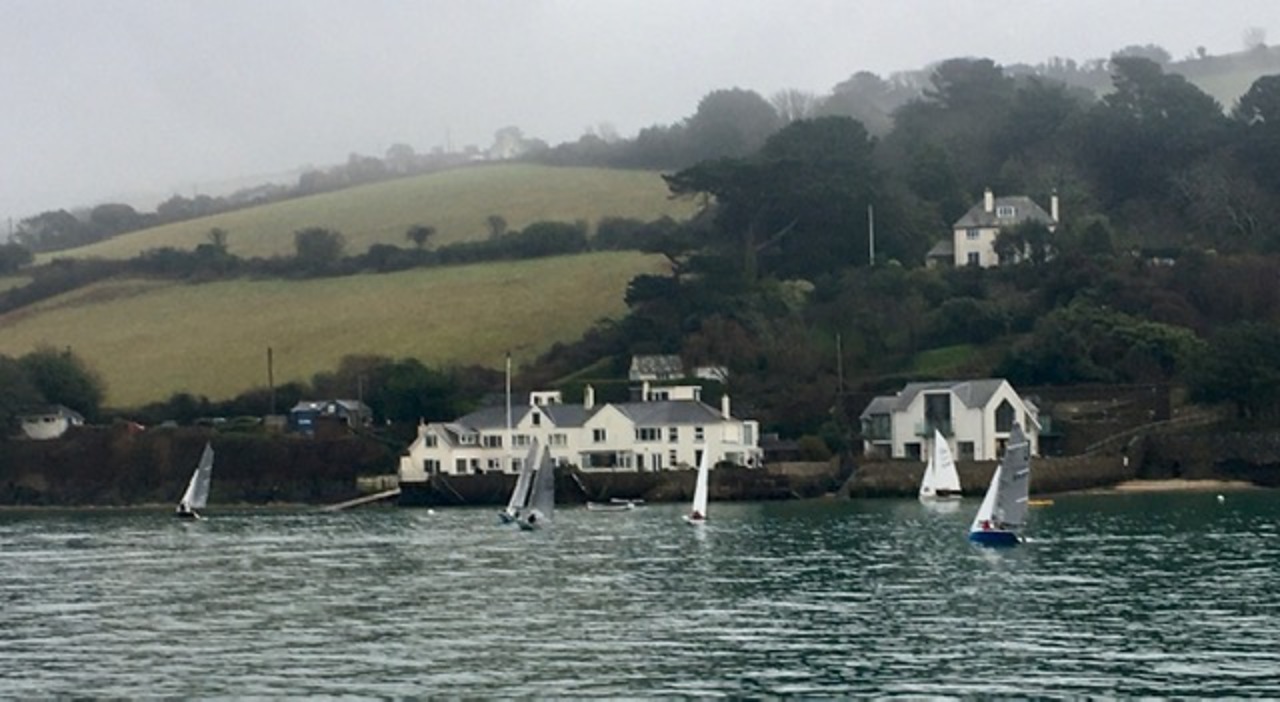