To be fair to all competitors, today's race didn't count towards the Winter Series, due to it being postponed by 24hours. 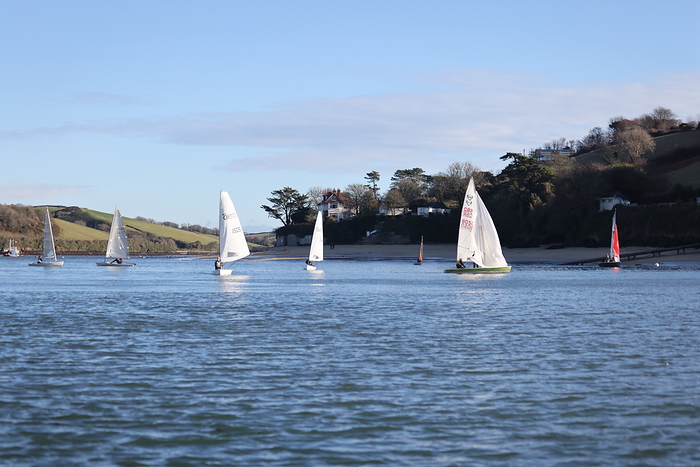 In typical North Westerly fashion, nailing the start was going to be tricky, Simon Ballantine found himself stuck in a hole on the line whilst the rest of the fleet rode a gust heading off towards Snapes. Unfortunately, once Simon eventually got going the damage was done and he was unable to pull back that initial deficit.

The wind in the bag was best described as blowing old boots. 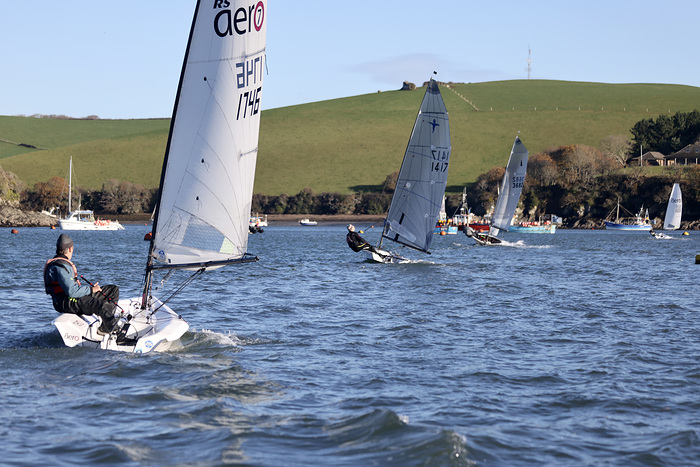 The 505 of Peter Colclough and Alister Morley, who was now able to get on the trapeze, started to pull away fast. However, with that huge kite, it was on the downwind leg where they really got going, they were absolutely flying and managed to take 3rd place.

Tim Fells had a good start in his Aero 7 but a little wobble as he rounded Snapes allowed the Merlin Rocket and Phantom to close him back up. Tim, and Olly Alexander (in the Phantom), had a close race all the way round but Tim held Olly off and in the end beat the Phantom over the water by some 40 seconds and took 2nd on corrected time. 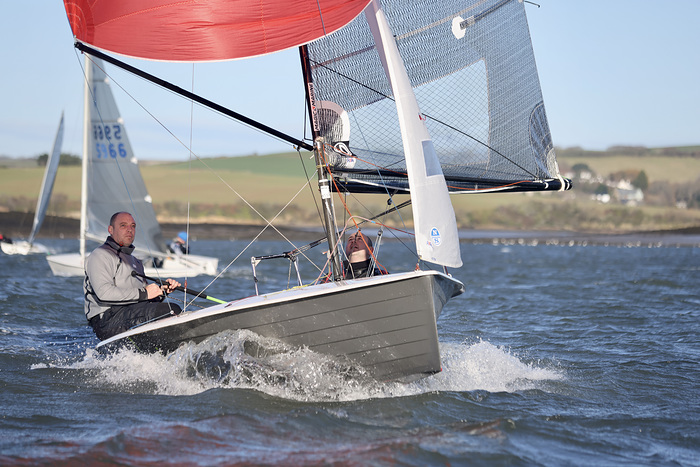 You know its windy when you see BOTH Ross Borne and John Burn hanging over the side of the Merlin. They were finally able to put their distinct weight advantage to good use, the conditions certainly suited the pair and they took the race win.

A special shout out to Edward Alexander who took on the tough conditions in his Tera Pro. As there is no Junior racing through the winter months he joins in with the handicap fleet and continues to shine. 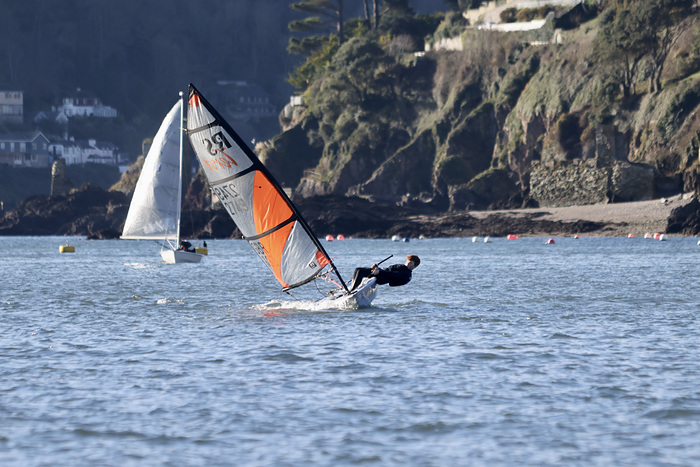 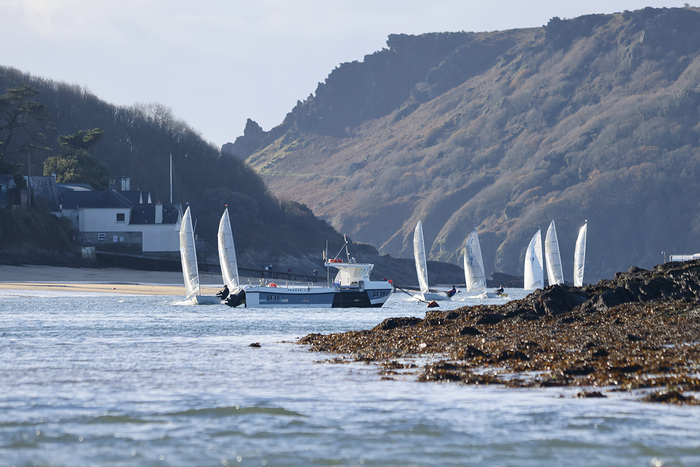 The north westerly breeze presented its usual dilemma for the 8 competitors in the Solo race;  start in the middle of the line in the hope of reaching the wind blowing down Batson Creek first or, choose the Portlemouth shore where the wind was more consistent.

The adverse tide probably decided things in favour of those on the Portlemouth shore with Billy Jago taking the lead followed by Chris Cleaves. These two, together with Tim Law and Paul Ellis, had managed to break clear from the rest of the fleet by the time they rounded Snapes. 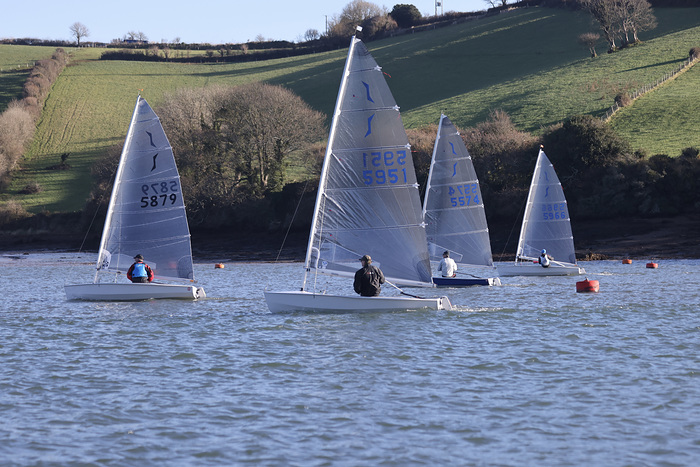 Jago lead until he got too close to Tosnos which allowed Cleaves to pass him and the latter extended his margin on the beat up to Gerston as the breeze freshened towards 20 knots. 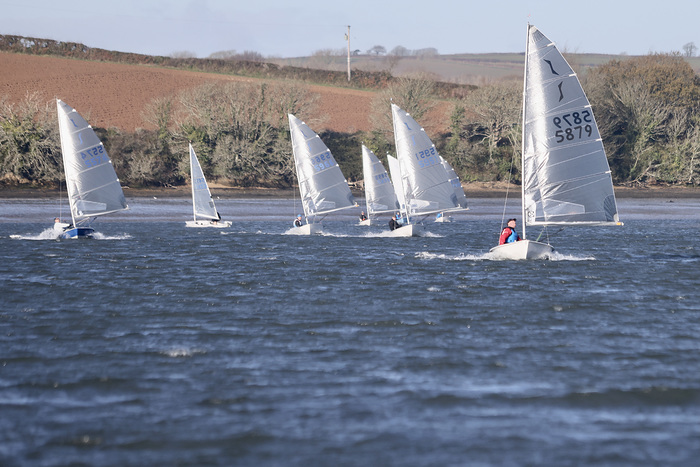 The fleet enjoyed a spectacular broad reach back to Crossways and then, on the second beat back to Gerston, Ellis began to move through the fleet, first getting past Law and finally Cleaves to take the lead. The final leg back to the finish line saw some more great downwind sailing followed by a few dicey moments in the wind shadow of Snapes but the running order in the top three remained unchanged at the finish. 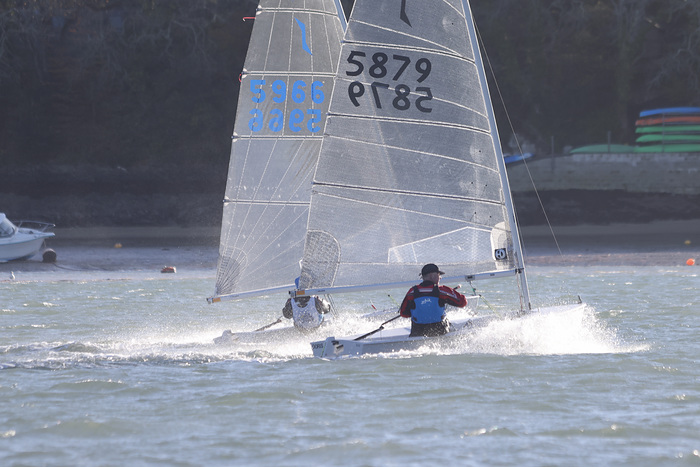