There were only 5 participants for Race 5 in the Fast Handicap Sailing Club series on Saturday. 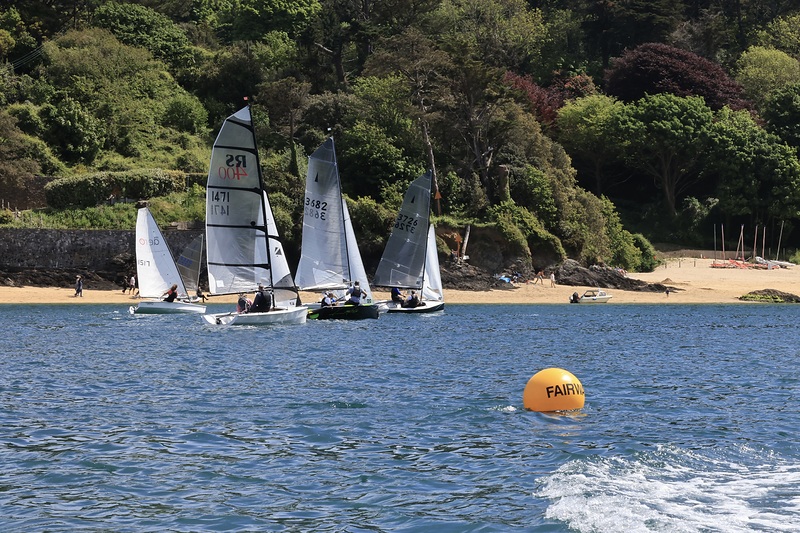 Malcom Mackley set a course consisting of 1-3-1-2-1-X but opted to shorten it as the conditions worsened, cutting out the loop around X.

Throughout the morning the sun was shining and the clouds were starting to break up meaning an afternoon sea breeze was a possibility. In reality though it never properly materialised, instead what the sailors got was two totally different wind directions with a massive hole separating the two right in front of the race box. 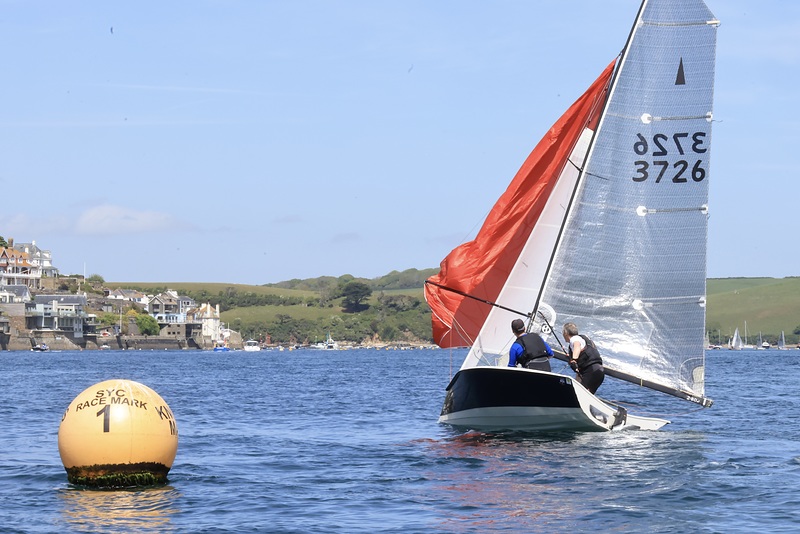 With the fairway in operation and tide flooding in the only sensible option off the start-line was to short tack up the Portlemouth shore. First to arrive at mark 1 were Will and Rob Henderson with everyone else hot on their heels as they made their way down to Crossways.

Will and Rob, in a Merlin, made the decision to cross back over to the Portlemouth side for the second trip to Blackstone along with John and Annie McLaren in an RS400. This cost them both dearly as they found little to no wind over there. 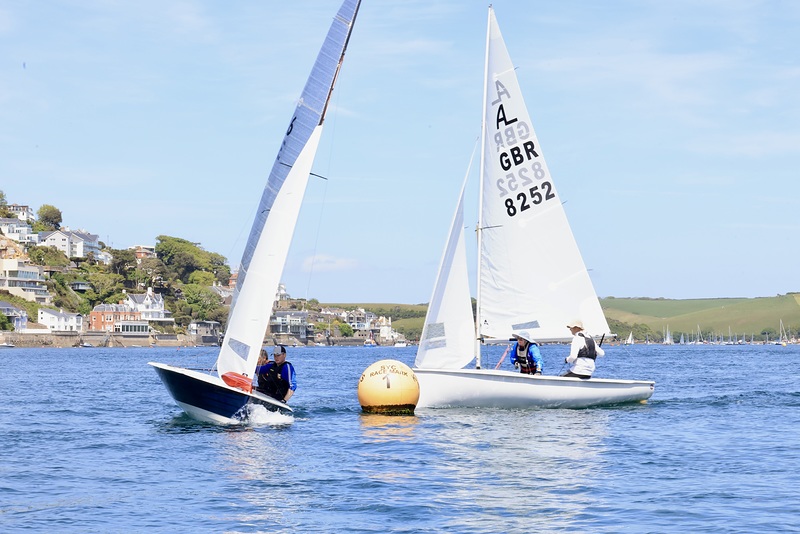 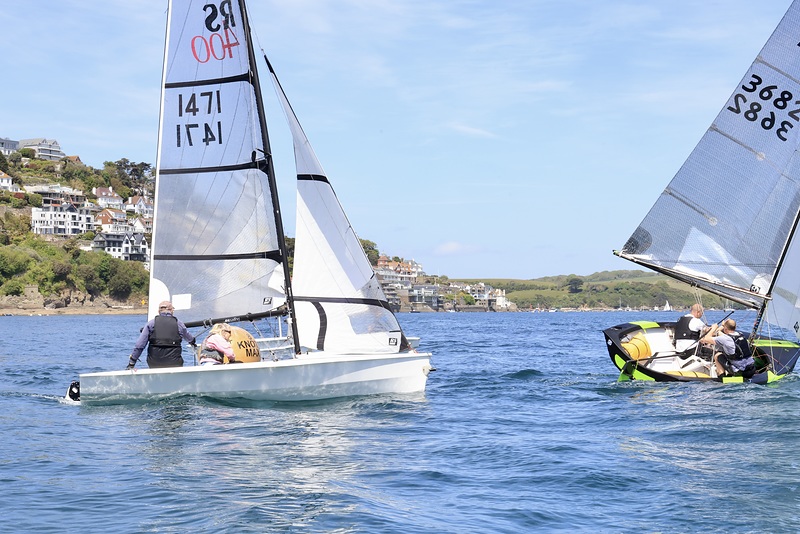 Andrew and Shelia Squire in the Albacore and Ross Borne with John Burn in the Merlin opted to stay on the town side. Andrew and Sheila sailed away from everyone on the beat and built themselves a substantial lead only to find themselves parked up on Mark 2 with the chasing Merlins quickly closing in. 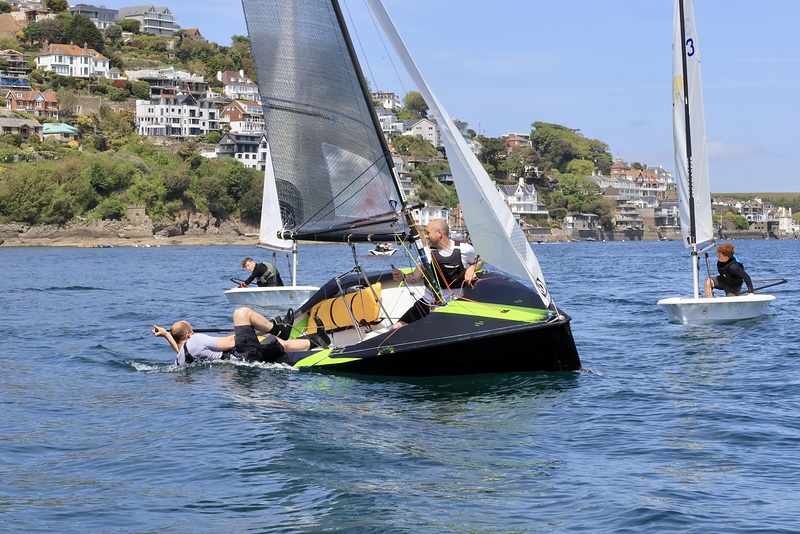 In true Salcombe fashion their lead was destroyed, all three now back together it was time to do it all again.

Lucky all was not lost for Andrew and Sheila, they did managed to get away from the Merlins who had split strategies rounding Mark 2 opting for opposite sides of the Estuary for the dash back to Blackstone. The Squires managed to hold off Will and Rob on the last downwind leg (that turned back into a beat halfway) to take the win on the water and on corrected time. 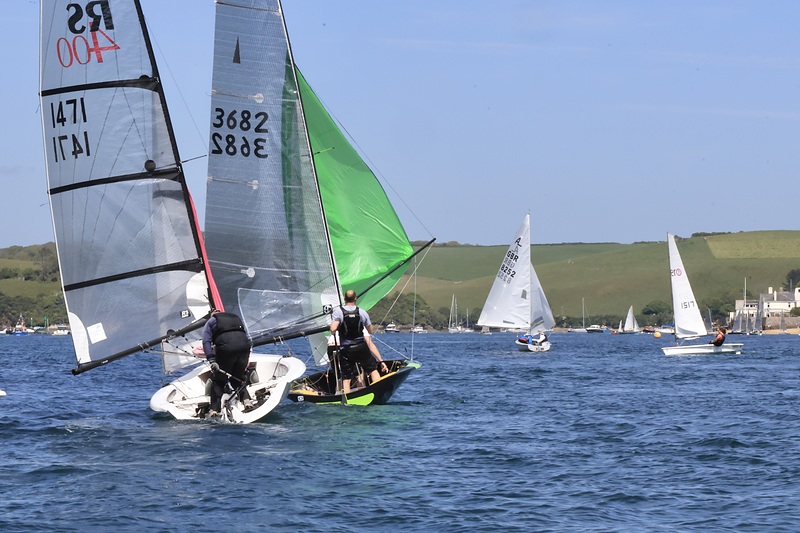 Will and Rob Henderson 2nd. 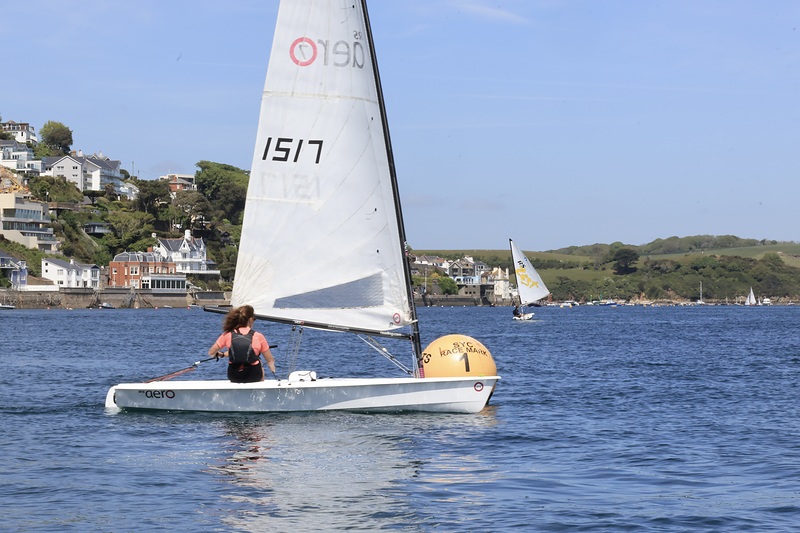 14 solos were on the start line for race 5 of the Sailing Club Series. 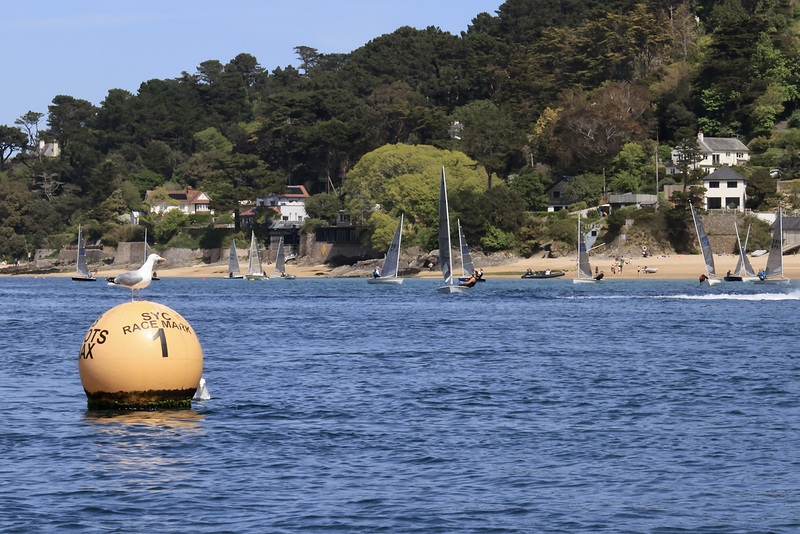 Olly Turner made the early running, breaking clear of the fleet as they short-tacked up the Portlemouth shore. 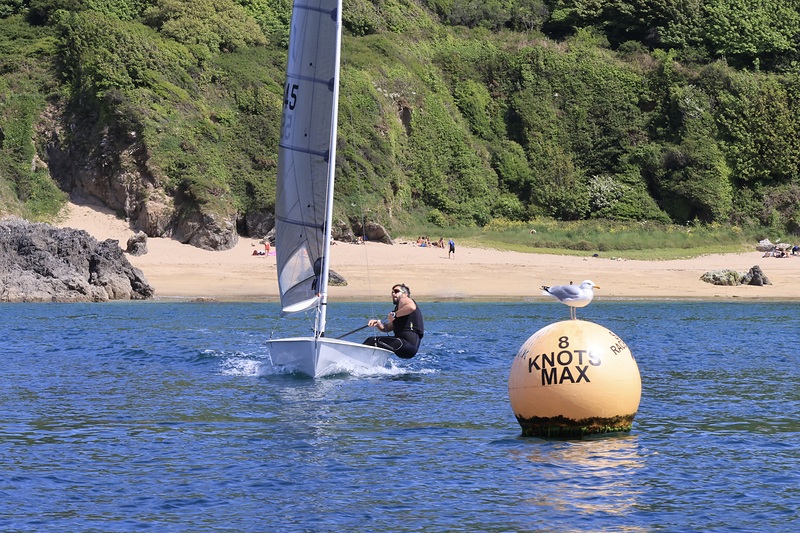 Robin Hodges was clear in second at the windward mark, followed by Simon Dobson and Chris Cleaves. 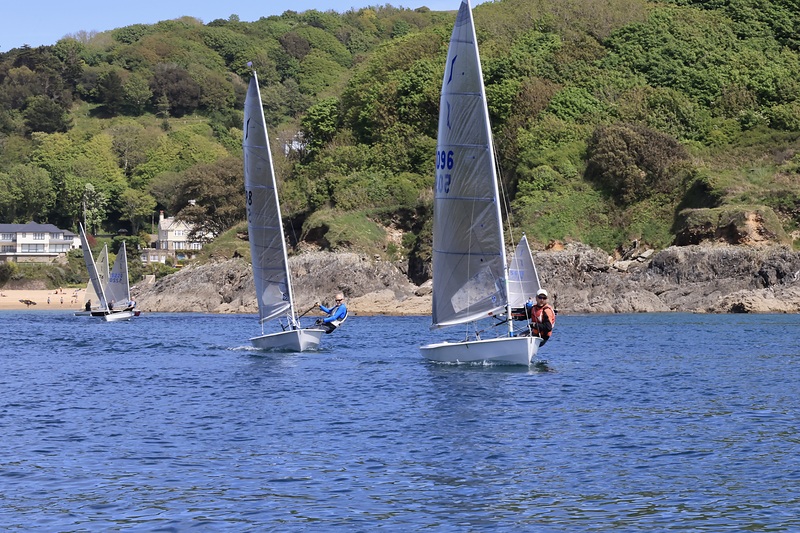 On the run back down to the Crossways mark the wind began to misbehave as an easterly blowing down the Yalton Creek encountered the sea breeze from the south. The shake-up saw Cleaves round in second behind Turner followed by Hodges and Dobson. These four had by now broken clear of the rest of the fleet who lay becalmed off the ferry. 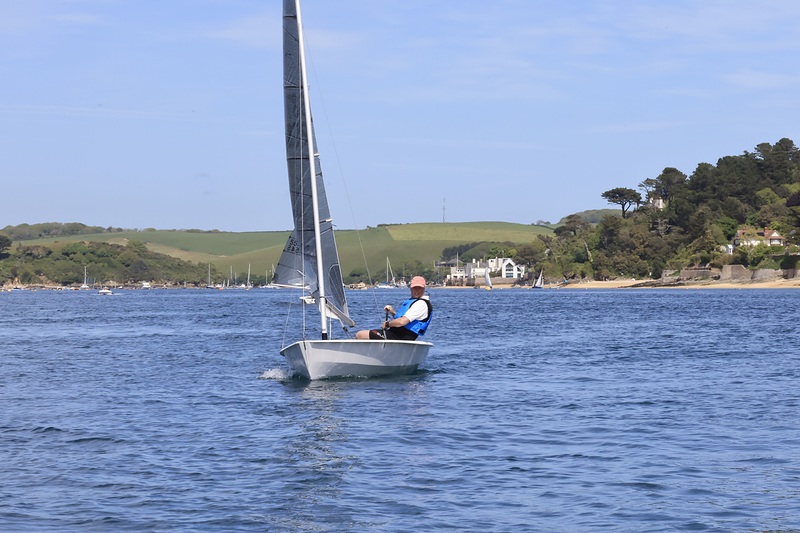 On the leg back to Blackstone Hodges made the race winning call to cross the tide early from Ditch End to the Salcombe side, Dobson following once he saw what a good idea it was. Turner and Cleaves elected to stay on the Portlemouth side and were never seen again, remaining becalmed in strong adverse tide at the ferry. 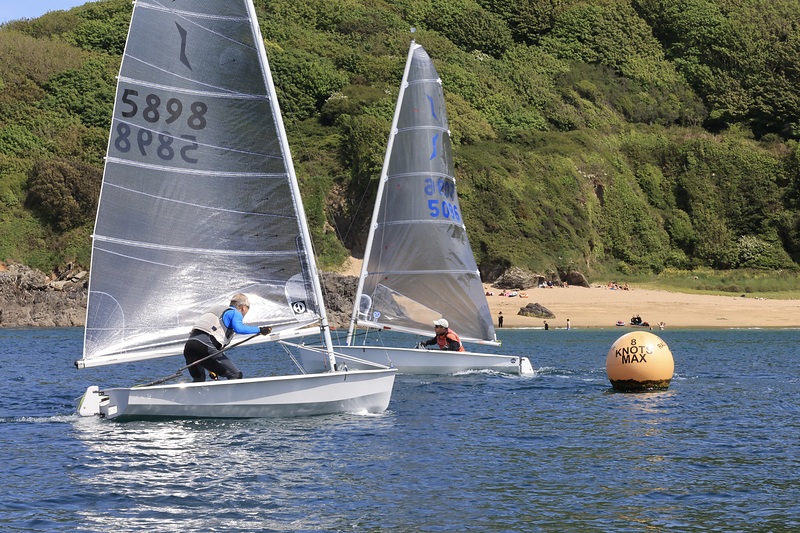 On the beat to Blackstone, Paul Ellis closed up from the chasing group and passed Dobson for second and, despite a few tense moments as the leaders transitioned between the two competing breezes, thats the way it stayed to the finish. 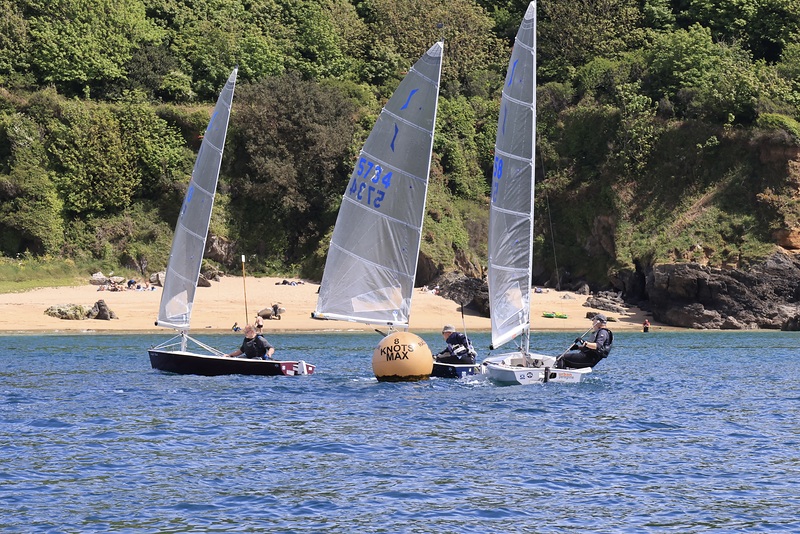