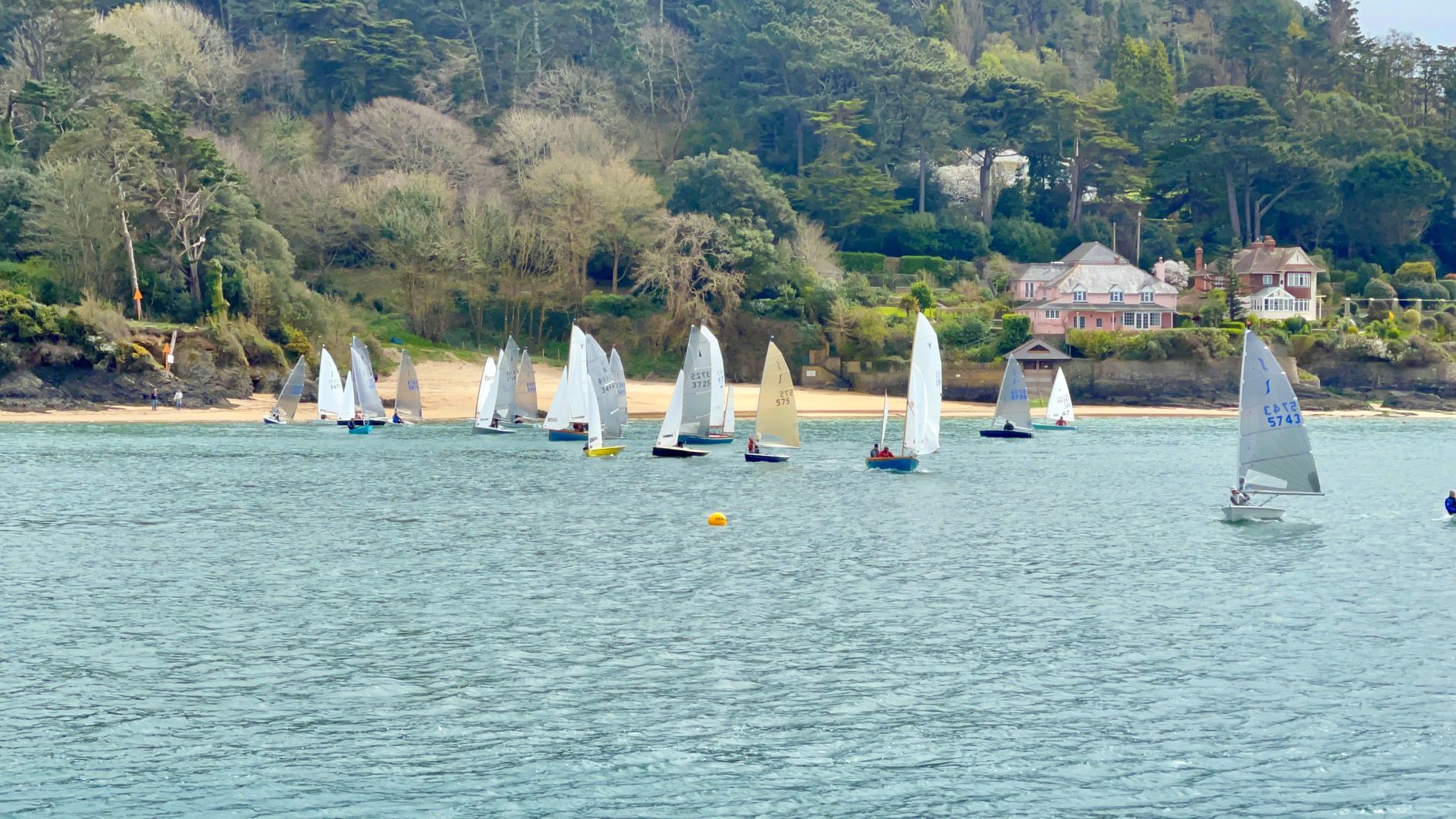 The dinghy racers of Salcombe Yacht Club reconvened for a postponed Commissioning Race on a bracing Saturday 3rd April.  Race Officer Ian Stewart and his able assistant Wendy set a course to Gerston, Blackstone followed by two loops of the harbour, which gave the sailors ample opportunity to reacquaint themselves with the vagaries of the Bag before flat out close reaches across Widegates to Gerston and back.

With a variable Force 3 to 4 East North Easterly on an ebb tide, consideration had to be given to resolve the paradox of whether to sail a potentially shorter route from the East Portlemouth shore but run the risk of less wind under the hill, or to short tack up the Salcombe shore.  The twenty nine boat fleet was equally divided on this at the start.

The four Merlins had an upwind speed edge on the rest of the fleet and pulled out ahead, with Mark Waterhouse and Fran Gifford leading up the Salcombe shore and Will and Mary Henderson leading off Portlemouth and who fed in with a healthy lead when they finally drove across the tide to the Salcombe side.

The Solos of Tim Law and David Greening and the Salcombe Yawl of septuagenarians Geoff Gilson and Chris Spencer Chapman and the non-septuagenarians Andrew Wood and Tim Petitt led the chase through the trots to Snapes Point.

On turning Snapes the fleet fetched through the Bag, where Paul Ellis planed through to leeward of the Yawls to catch the onto the heels of Law at the Gerston gybe mark, as the four Merlins planed into the distance.

Those caught behind the returning Yawls felt much as it must have been like to be stuck behind a six wheel Tyrell at Monaco, which allowed the Solo of Chris Cleaves to overtake Greening and Simon Dobson, when he took the rarely successful route through Crab Pots.

So, with the four Merlins sailing in formation toward the line, the Race Officer shortened the course, allowing Will and Mary to take line honours from Mark and Fran, however it was the Solo of Paul Ellis that emerged victorious from Tim Law on corrected time.

All the sailors came off the water with smiles on their faces, grateful to be out on the water again.