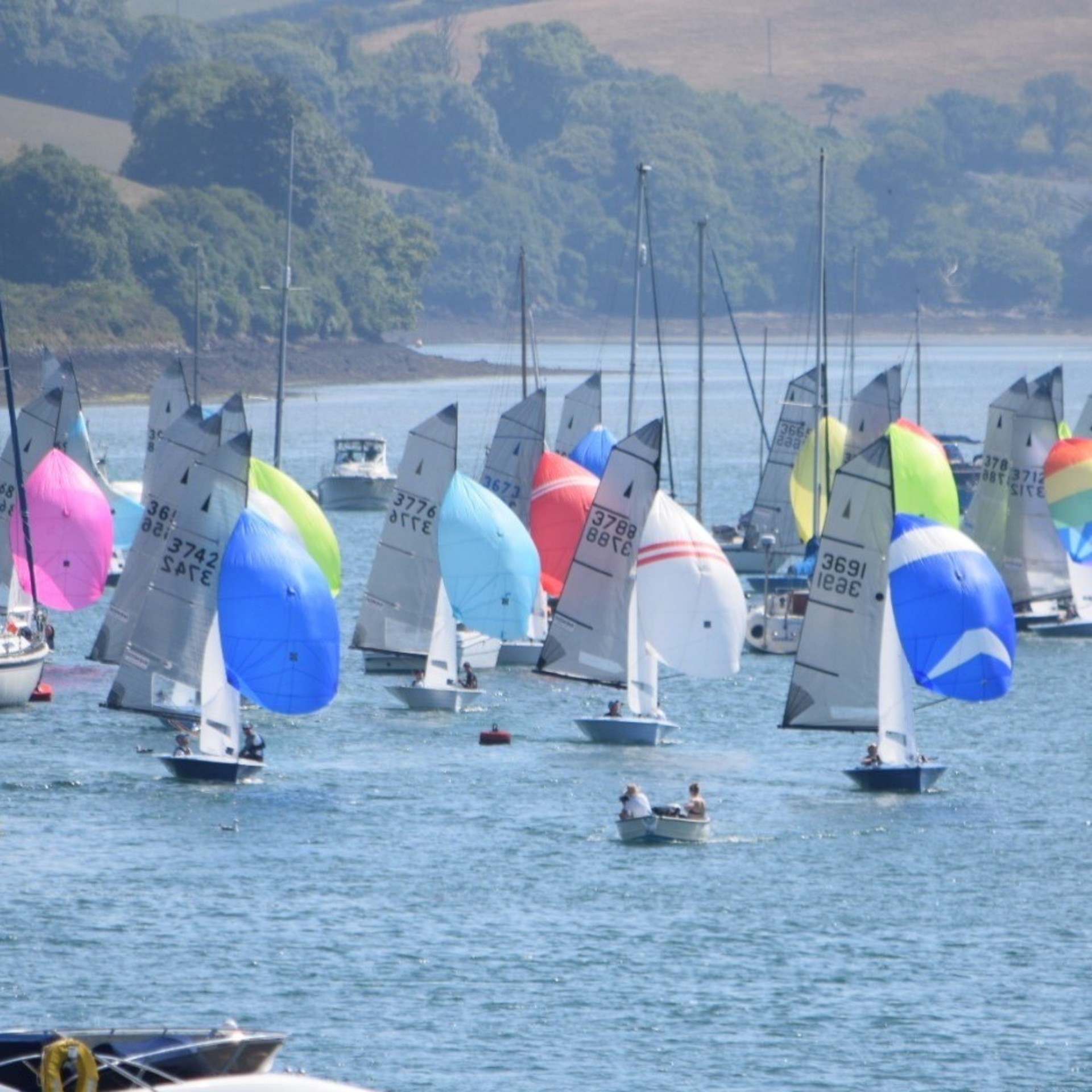 Another clear blue sky and an encouragingly healthy northeaster greeted the many sore heads after a big night in the club with Nick the Fish belting out the tunes.

With reasonable pressure all the way up to Crossways, the fleet lined up early hoping to hold position.  However, the start of the weather going flood caught out five boats including Nick Charles who had starred on Sunday afternoon.

In these conditions, the Calverts are a force to be reckoned with and led to the first mark ahead of Peter Ballantine and Rob Allen of the home club. Christian Birrell and Sam Brearey, fired up by their win on Sunday, were first to gybe off Smalls and took the lead on the town side before surprisingly taking a flier back across the tide that dropped them out of the leading bunch.

However, the conditions were about to change dramatically with a SE sea breeze starting to form in the harbour entrance.  The race all but started again with a real challenge to get up into the new breeze against the tide and then across to M which is up under the cliffs on the East side of the bay.

The Calverts were again masters of the conditions and were first to round mark M followed by Alan Roberts and Rob Henderson sailing Nick Craig’s championship winner.

There then followed a slow run with tide back up the harbour chasing the transition zone which the Calverts passed off Mill Bay.  Each of these transitions allowed boats to come up from behind with a degree of randomness / luck as to where the pressure would hold and reappear.

By the time the leaders were around Crossways for the second time and running back to the line, the transition was off the Ferry steps.  The Calverts reached it first and parked with Alan and Rob sneaking down the bank to close the gap to a couple of boat lengths.  At which point, Alan and Rob got a bit greedy trying to cheat the tide inside a moored RIB, hit the bottom and Alan had to jump out to swim the boat around.

Mike and Jane duly got to the new pressure and took a well-earned bullet.  Alan and Rob were able to recover into a great second place.  Taxi and Alex kept their composure to escape from the bunch to take third ahead of Dave Wade and Ros McGrane.  Ian and Ellie Sharps recovered from their Sunday BFD to take fifth ahead of Julian and Evan Parry.

Conditions for the afternoon race were looking glam with the sea breeze now established to allow both helm and crew to occasionally extend their legs.  However, there were already signs of what was to come with the breeze switching from SE to SW and back again with boats on opposite sides of the harbour holding the same line on opposite tacks.

In the line up for the start there looked like more lifting pressure on the right which attracted the majority of the fleet.  This allowed the Chris’s Gould and Kilsby together with Chris Jennings and Oli Wells a clean start on the Portlemouth shore where they also found some good pressure and a port lift to pop out ahead.  Meanwhile other boats were pursuing the town side and it was old sea dog Dan Alsop with Sophie Penwarden who rounded first only to be pulled out for a BFD.

The two Chris’s were on fire after their bullet in the first race, but their path to the finish kept being blocked by a transition zone on the approach to Crossways.  To their credit, they kept their cool and kept finding the new breeze first and, although briefly passed by Si Blake and Phil Dalby, held on to take a magnificent second bullet – quite remarkable considering how challenging the conditions are.

Behind them places were changing continually and it was Chris and Oli who sniggled up to second at the line ahead of Si and Phil.  Simon and Ally Potts were always around the leading group to come home fourth as were Jason Andrews and Zeb Elliott in fifth. Nick Hegginbotham and Zoe Parry added a sixth to their eighth from Sunday.