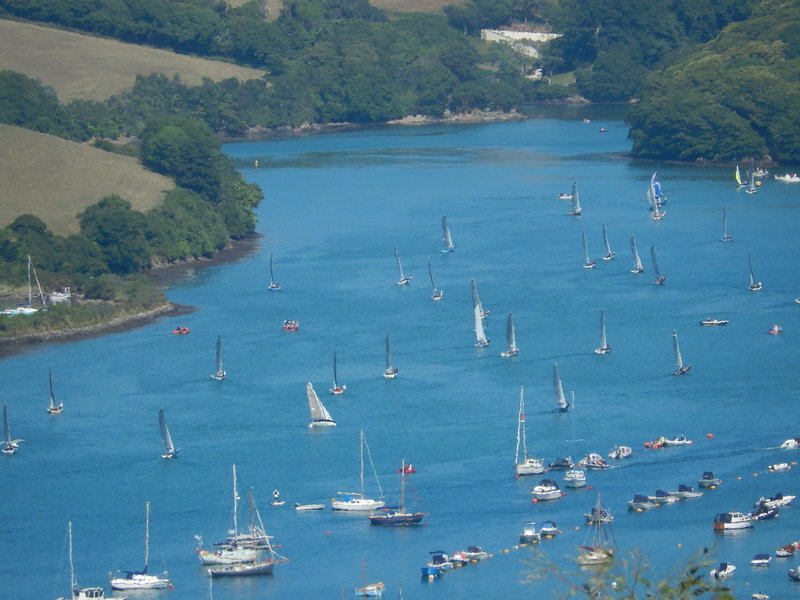 Competitors awoke on Tuesday morning to a new sound, the rustle of wind in trees.  After two days of gradient versus sea breeze, there was an expectation of racing without the dreaded transition zones.  The wind was into the ENE and up to a force 3-4.

The morning race brought together a number of the front runners including leaders Chris Gould and Chris Kilsby and second placed Taxi and Alex.

PRO for the day Scud Stewart decided it was about time that the fleet got to explore the estuary and added some new numbers to the course card.  The wind on the start line was very shifty with more pressure on the town side but the promise of starboard lifts up the harbour.  For the first time, the fleet was clean away with Taxi and Alex pulling off the perfect start between your correspondent to windward who was left stuck in irons and Christian Birrell to leeward who he was able to role.

With a clean line up the harbour, Taxi and Alex rounded Crossways with a nice lead from Chris Jennings and Oli Wells and were then able to choose their route through the Bag without having to defend.  Sailing beautifully, they extended to do the proverbial horizon job and take their first bullet.

Once around Gerston, the battle behind settled down with Chris and Oli comfortable to repeat their second place finish from Monday and put themselves up amongst the title challengers.  Going along very nicely in third were Jason Andrews and Zeb Elliot, enjoying the opportunity to use Zeb’s considerable leverage to advantage. Tucked in behind them in fourth were Steve Crook and Sally Townend.

Behind these four there was a gap to a ding dong battle between Christian and Sam, Dave Wade and Roz McGrane, Tim Fells and Fran Gifford and Paul Rayson and Christian Hill which was finally resolved in that order.

For the afternoon there were signs that the gradient was starting to fade but a clean start with the flood tide under them sent the fleet away on the short beat to Crossways. Finding the pressure, lifts and lanes through the many moored boats was tricky and it was Roger and Jane Gilbert who navigated best to round first with Olly Turner and Holly Scott and Caroline Croft / Matt Lulham in close attention.

After the trip to Gerston the key moment was exiting the bag where those who got too high under Scoble Point missed out badly and those who kept low towards Snapes kept the breeze.  Si Blake and Phil Dalby came through to lead up to Yalton with the Calverts in close company.

On the run back down to the town, the Calverts came through and looked like they were away to the win, except there was a sea breeze front coming down the harbour.  Off Ditch end the leaders parked up and the chasers came in on the old breeze.  At this point there were two strategies – head for the Portlemouth shore or head to the town side.  The Calverts were the most extreme, gybing away and heading for Batson, almost away from the line. They then caught the new breeze and started making great progress against those who had found some breeze on the Portlemouth shore.

As the leaders approached the line on opposing shores it was too close to call and PRO Scud Stewart rang one continuous bell for the first three. It was only when the results were published that the positions were clear.  Si and Phil had just snuck ahead of Mike and Jane with Stephen and Gillian Lenney a wafer-thin margin behind in third.  The Gilberts were fourth narrowly ahead of William Warren and Maddy Anderson with Simon and Ally Potts closing out the top six.

At the time of going to press there is a protest which may impact the top finishers.