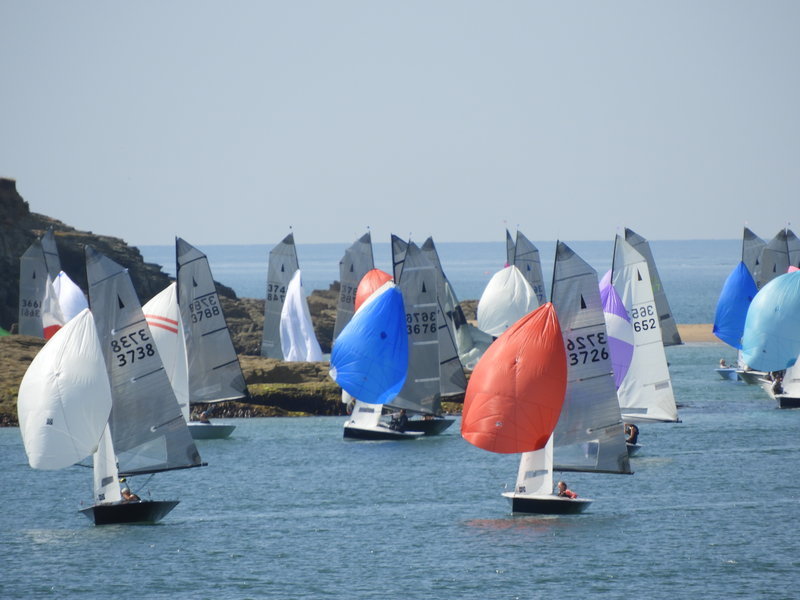 Wednesday dawned to another day of wall to wall sunshine and a surprisingly early established sea breeze cell which extended seaward to Starehole Bay and well up the harbour.  While only a F1-2 it gave the promise of some more consistent conditions.

PRO Dave Greening made a ballsy decision to send the fleet to sea in what was to prove a fair beat of nearly two miles.  A clean start again, had those at the Portlemouth end immediately in control with Ian and Ellie Sharps and Christian/Sam showing early.

On the long beat to mark M, Simon and Ally Potts recovered well from a start on the town side and lead around ahead of the sister pairing of Jenny Dodds and Pippa Kilsby.  On the even longer run back up the harbour to Mark Z, which was north of Saltstone, Jenny and Pippa took the lead chased by Si Blake and Phil Dalby.

On the beat back to Blackstone, the girls slowly extended to have a comfortable lead allowing them to relax and take their first bullet of the week.  Behind them, Will and Mary Henderson slowly eroded Si and Phil’s lead and came through on the run to Crossways to take second.

Further back there was a great battle between Simon and Ally, Ian and Ellie, Taxi and Alex, and Christian/Sam.  Changing places all the way up the beat to Blackstone and then down the run it was the wily team of Taxi and Alex who rounded Crossways first and were able to take fourth place to the line.  Ian and Ellie got the better of their family battle to beat Simon and Ally for fifth and sixth.

With dark clouds inland, it was a rather uncertain fleet who took to the water for the afternoon race.  Would the light sea breeze hold, build significantly or die altogether?  By the start the breeze was more into the SSE, with a building flood tide two days away from Springs, making the Portlemouth shore the favourite spot to start.  Amazingly there were no premature starters.

Caroline Croft and Mat Lulham-Jones showed nerves of steel to win the start and led away chased by Roger and Jane Gilbert who had taken the lead by Blackstone.  Meanwhile the Calverts had pursued the unfavoured town side to round in third ahead of Mat Biggs/Becka Jones and Tim Fells/Fran Gifford.

The long run to Gerston provided little opportunity for gains until the wind shut down after Heath Point.  The leaders kept to the west shore to find new breeze while those who chased the old breeze out to the east lost out. On the return past Heath Point, Caroline and Mat were first to find the new breeze and led out to the East shore past Saltstone while the Calvert held the West shore down to Tosnos before crossing the tide and in so doing took the lead at Ox Point.

The final loop of the harbour, though sailed in light airs against the tide, provided no passing opportunities.  The Calverts came home well ahead to take their second bullet, Caroline and Mat were a strong second, Tim and Fran just pipped the Gilberts for third.  The Chris’s Gould and Kilsby took a useful fifth ahead of Alan Roberts and Rob Henderson.

With four races down the battle for the title is looking to be between Taxi and Alex, Si and Phil, the Calverts and the Chris’s.  The forecast is for more of the same; a light land breeze being replaced by a sea breeze each day, so it will continue to be very tricky.