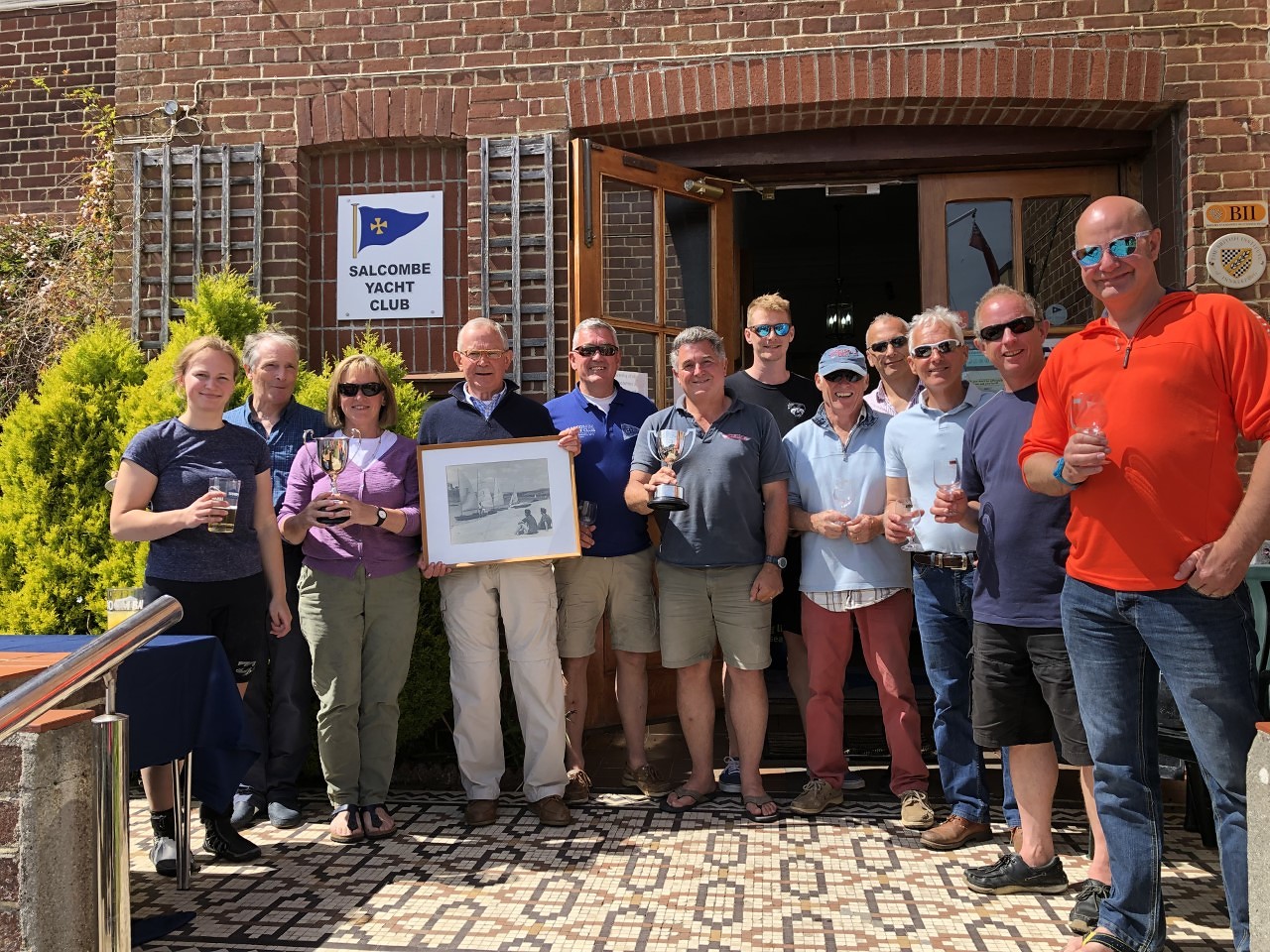 The Whitsun Weekend attracted twenty-six Solos, twenty-three Salcombe Yawls and fourteen RS400s to Salcombe Yacht Club to complete a four race series under the supervision of Principal Race Officer Geoff Gilson.  Predominantly fresh westerly breezes and very neap tides made for exciting sailing and a tendency for the locals to overthink their routing.

The Saturday afternoon race got away with a solid beat with the ebb tide out to Blackstone. In the Solo fleet it was the Laser boys; Tim Law and Mike Hicks at the fore, with visitor Nick Martingale holding the podium places for much of the race, to Gerston, followed by diminishing loops of the harbour. In the Modern Yawl fleet Will and Mary Henderson enjoyed their own private puff in The Bag whilst the rest of the fleet lay becalmed. They claimed a comfortable win from Simon Gibbens and Andrew Reed in second and Paul Ellis and Martin Beck in third. The Classic Yawls enjoyed some very close racing with the lead changing hands multiple times. Stephen Galvin and James Smith timed their late charge to perfection to take victory from Simon and Nicki Dobson and John Smithers and Peter Hughes.

Sunday morning dawned breezy, and with a high tide, the course was Blackstone, Yalton, Crossways, Yalton; Amongst the Solos David Greening and Robin Hodges emerged from the leading bunch on a planing run, chased down by Tim Law, with Greening and Law crossing tacks on both of the beats out of Yalton.  Upon re-entering the main anchorage, Paul Playle came into contention, however a diversion to the Ferry by Playle and Law, allowed Greening to take the long tack from Fisherman’s toward the Watch House and secure the win from Playle and Law. The running order at the front of the Modern Yawls fleet had a familiar look to it until Andy and Elizabeth Savell pipped Ellis and Beck for third place whilst in the Classic fleet Andrew Wood and Tim Petit began to show some ominously good form in the stronger breeze to lead from start to finish.

The wind had eased slightly for the Sunday afternoon race, which saw a repeat of Saturday’s Blackstone Gerston Blackstone Crossways Millbay Crossways course. In the Solo fleet Tim Law, Robin Hodges and David Greening broke away from the pack at Tosnos and by the return to the Bag Law was long gone, but Hodges and Greening were caught while wallowing off Biddle Head by Ian McGregor securing third place from Hodges. In the Modern Yawls the Hendersons won their third race in a row, thereby securing the title but behind them Alistair Morley and Charles Thompson took second with Andy and Elizabeth Savell again in third spot. In the Classic fleet Wood and Petit repeated their morning form, this time winning from Smithers and Hughes followed by Guy Rigby and Tom Crampton Smith.

On Monday morning the fleets were set the ever-popular tour of the harbour; Blackstone, Gerston, Saltstone, Frogmore, and Yalton.  On a flood tide, the Solo fleet divided between the Salcombe and Portlemouth sides, with Simon Yates, Roger Bennet, Nick Jackson and Mike Hicks making it from the Portlemouth side before the wind shut down, while those on the Salcombe side, led by David Greening fed in. After a spectacular planing reach back from Gerston to Saltstone, Yates led Bennett then Greening, and on the final beat out of Yalton, Roger Guess and a reinvigorated Hicks joined the fray, and all five of this group held the lead and some stage.  Eventually on a very belated shorted course signal, Hicks took the win from Bennett, then Greening.

Ellis and Beck got away at the front of the Modern Fleet and extended throughout for an impressive victory. Wood and Petit again proved unbeatable in the Classic fleet securing them victory overall, Galvin and Smith doing enough to take second overall with Smithers and Hughes third.

The RS400 fleet enjoyed some spectacular racing with the downwind legs particularly challenging in the gusty conditions. Plenty went swimming along the way. The Starcross YC team of Richard Cain and Barney Dearsly, possibly more accustomed than most to gybing down a narrow Estuary, claimed overall victory by the narrowest of margins from Howard Farbrother and Louise Hosken of Queen Mary SC. Local lad John McLaren, crewed by either wife Annie or Fiona Cranford Smith, took a creditable third.

All in all, an excellent weekend of sailing, helped along by the drinking vouchers generously provided by Barney Greenhill and the sponsorship of Coast and Country Cottages. At the prize giving on a sun-drenched Yacht Club terrace Barney Greenhill presented the now famous Struggle Trophy to Tristram Squire for the Solo sailor who finished all races with the most points.