It was yet another light wind affair for the 6th race in the Sailing Club Series but at least the wind was coming in from the right direction-ish.

Two Laser radials and one 4.7 took to the race course for the Medium Handicap; Andrew Groves, Nicki Dobson and Edward Alexander. 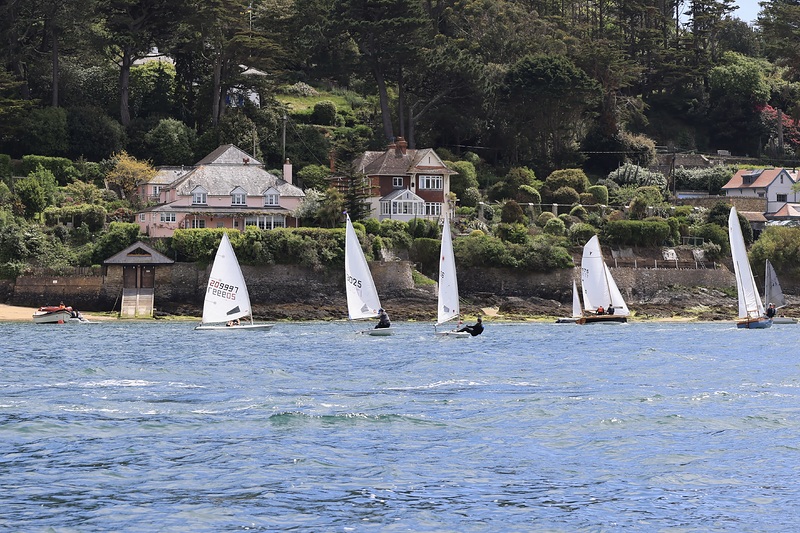 In usual fashion Andrew led from the start and quickly managed to put a decent distance between himself and the other pair. Andrew never looked troubled and comfortably won taking 1st Place. 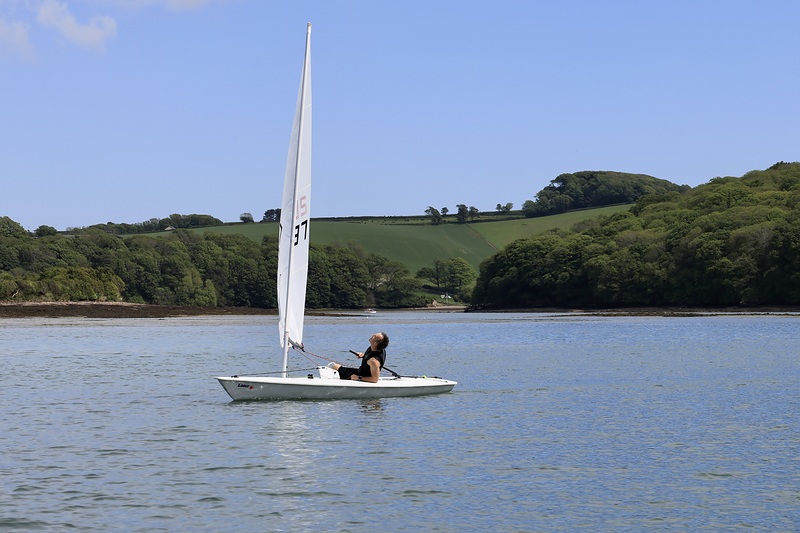 Edward managed to stay close enough to Nicki to snatch 2nd leaving her having to settle for 3rd.

The Fast Handicap once again had 5 boats all competing for victory. There was not much between them on the first beat to Mark 1 all rounding together. A good initial start to the downwind leg saw the Merlin Rocket of Ross and John squeak away and start to build a lead. 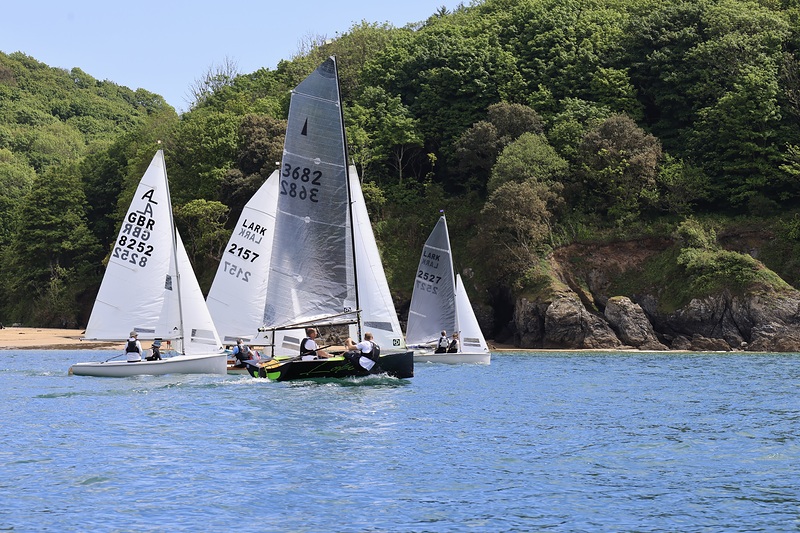 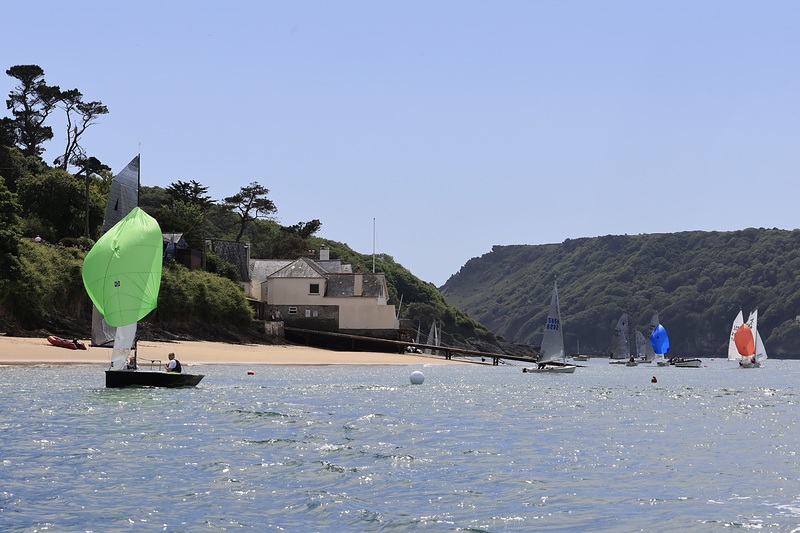 Some differing opinions on how to navigate the infamous Bag saw the Lark of Will and Mandy Henderson and Phantom of Olly Alexander suffer more than most, loosing out to Tim Fells and Fran Gifford also in a Lark who hedged their bets sticking it up the middle along with Andrew and Tristram Squire in the Albacore. 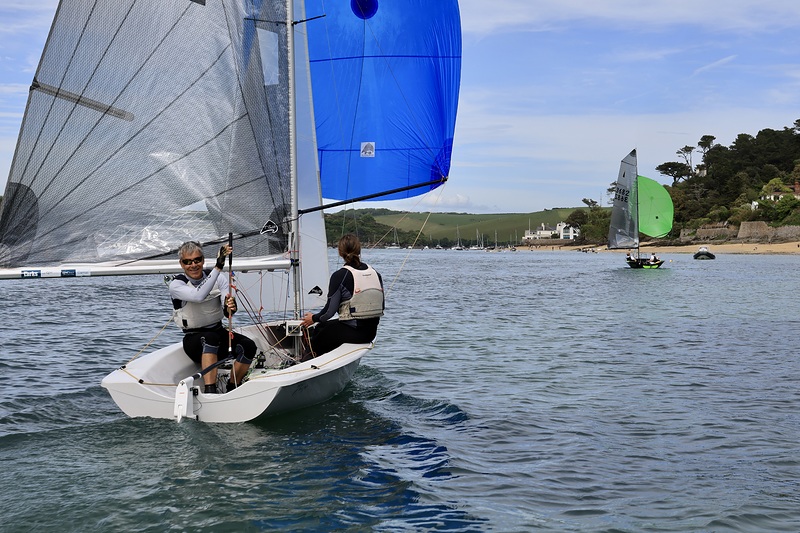 Tim and Fran along with Andrew and Tristram now had their sights firmly set on the Merlin out in front, who at rounding Mark 7 had built themselves a 1 minute 38 second lead.

The wind was dropping throughout the race, not ideal for the heavyweights out in front so the Lark and Albacore now on a charge reeled in Ross and John on the leg back from 7. 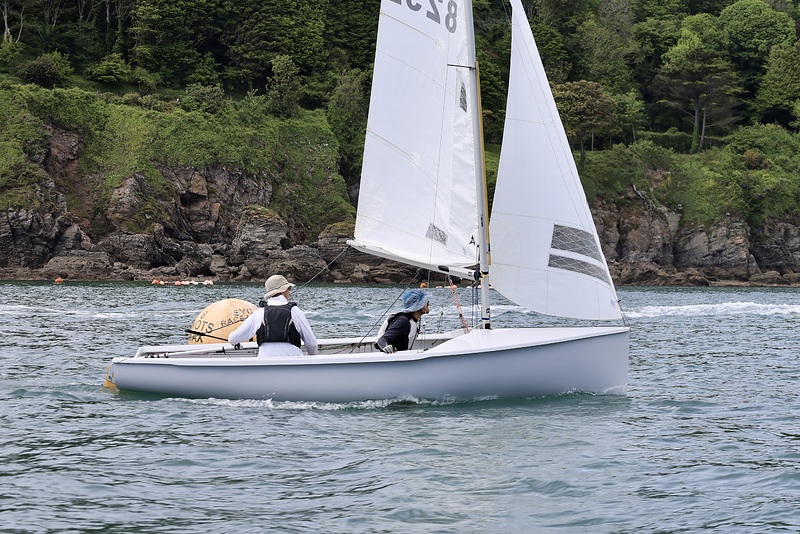 By the time they had completed the 1-3 loop in the harbour the 3 different handicap boats all finished within 20 seconds of each other. The Merlin did managed to fend the Lark and Albacore off to take line honours but it was Tim and Fran who took another 1st place, Andrew and Tristram 2nd and after a wise decision to cross to the town shore rounding Blackstone Will and Mandy finished off the podium places in 3rd.

Twenty Solos lined up for the start on Saturday afternoon and the combination of a congested start line and a strong ebb tide saw many boats over and a general recall first time around. 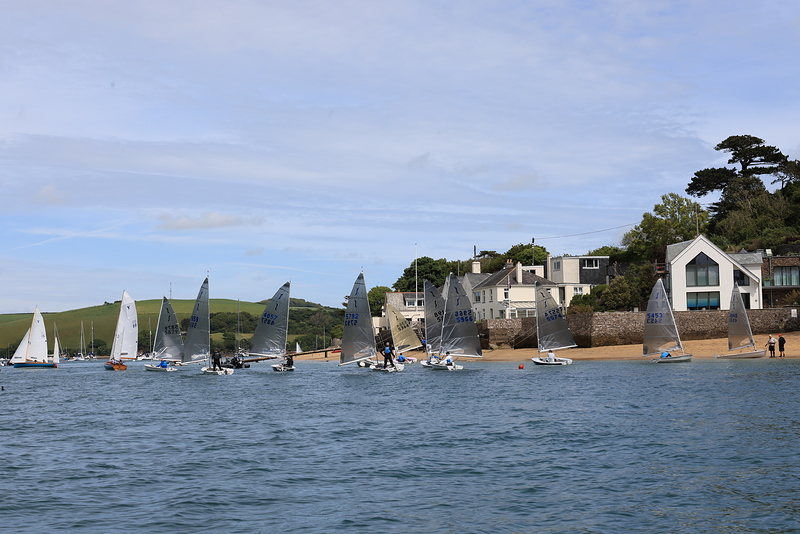 On the second attempt, Race Officer Malcolm Squire sensibly hoisted the Black Flag, meaning that any premature starters would be instantly disqualified.

This did the trick with all the fleet well behind the line at the restart all apart from Geoff Allen who made a perfect start at the favoured Portlemouth side and tacked on to port to cross the fleet with ease! 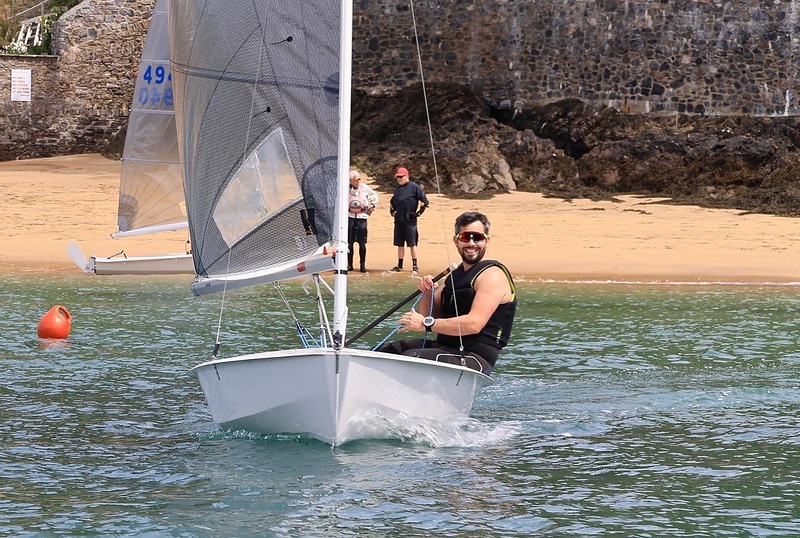 Further up the beat the usual contenders came to the fore as Paul Ellis took the lead, followed by Olly Turner, Tim Law and Chris Cleaves. A left shift at the top of the beat allowed Simon Dobson to leapfrog into second place but there was little separation in the top ten boats. The light air run against the tide saw Ellis and Dobson break clear from the rest who all struggled to find clear wind. 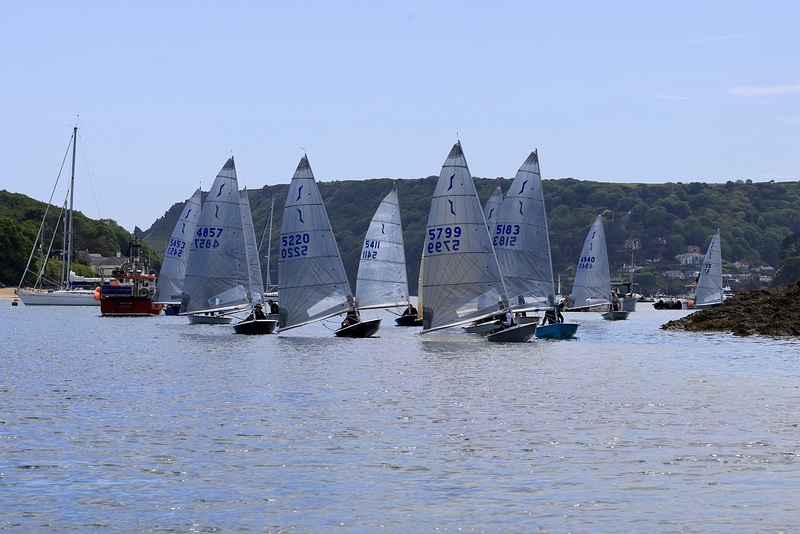 At Snapes Cleaves joined the front two and these three played cat and mouse through the Bag. At Halwell Woods Dobson held a lower line and, perhaps in less tide, broke clear from the other two who had now been joined by Mark Waterhouse. On the beat back to Blackstone Cleaves gradually closed up to Dobson but a small mistake near the mark allowed Dobson to round with a healthy lead and head for the Portlemouth shore to escape the fading adverse tide. 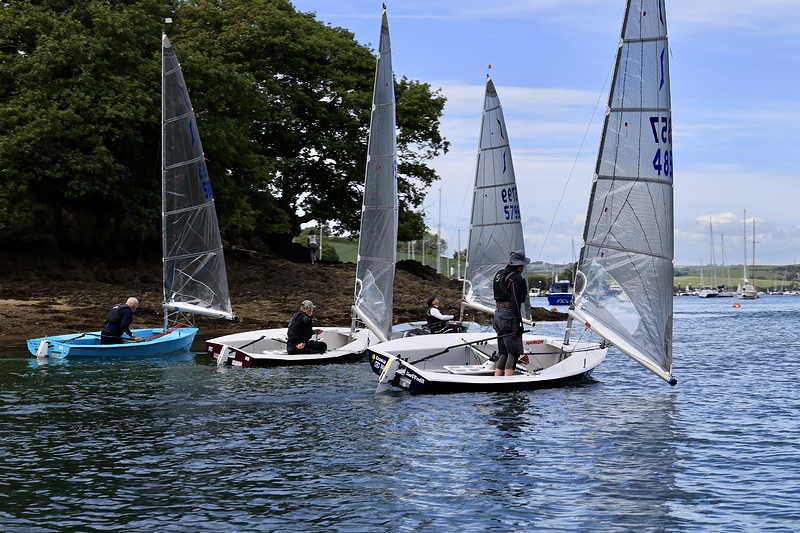 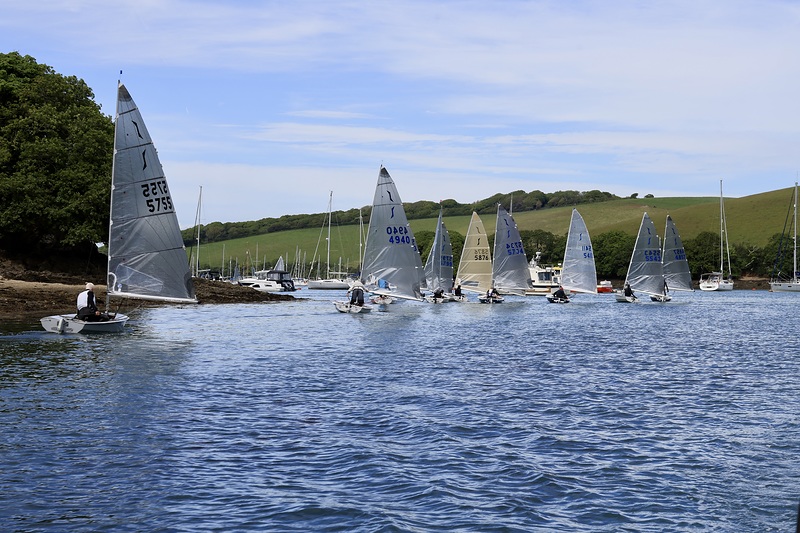 Further back Ellis and Law elected to gybe off and head to the Salcombe side and, carrying more pressure, overtook Cleaves who was becalmed in Mill Bay. Dobson saw the danger and gybed across to cover the boats on the Salcombe shore which was enough to ensure that he rounded the final mark with a comfortable lead. Behind him it was Ellis, Law and Cleaves finishing a long and hard fought light air day. 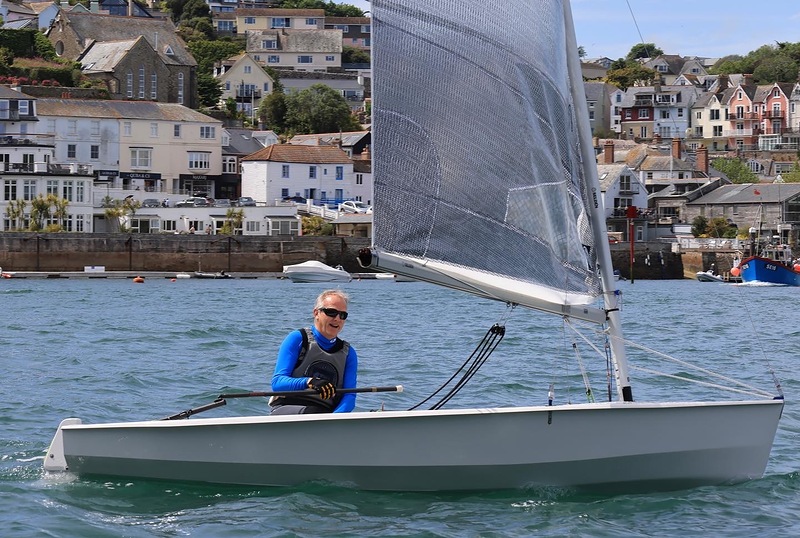