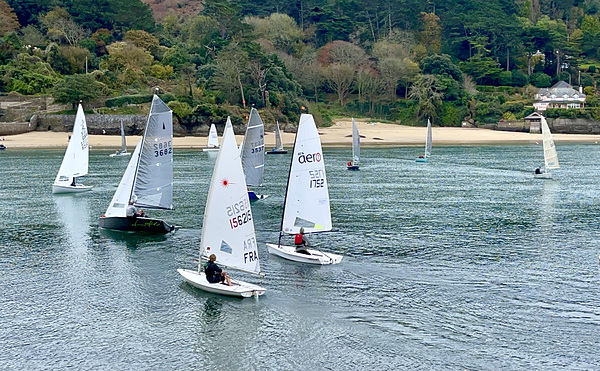 The sailors were in for yet another light wind affair and subsequently this led to a much lower turn out.

The Course 3-2-3-2-3-2. The fleet all opted for a town side start except Amy Cleaves in an Aero 7 who decided the Portlemouth shore was the place to be. Initially it looked promising but unfortunately for her it did not pay off and the rest of the fleet eventually pulled clear.

Andrew & Sheila Squire in the Albacore, Dan Bridger in an Aero 7 and Mike Hoyle with Sian Hodges in a N12 all opted to stay up towards the town moorings out of the tide but ran out of wind as they got closer to Snapes. Ross Borne & John Burn in a Merlin Rocket ignored the tide and headed for the wind, sailing down the middle of the estuary.

This tactic appeared to pay off as they rounded crossways first just ahead of the Squires.

On the beat back from Millbay the Albacore caught the Merlin and cruised past to take the lead.

Mike and Sian were next to pass the Merlin just before the ferry slip-way and began chasing down the Albacore.

By the time they reached Cross Ways for the second time the N12 had caught the Albacore and they were now heading back to mark 2 side by side.

Upon rounding Milbay thankfully the OOD shortened the course, Mike and Sian in the N12 that took the race win, Andrew and Sheila bagged 2nd with Dan Bridger taking 3rd. 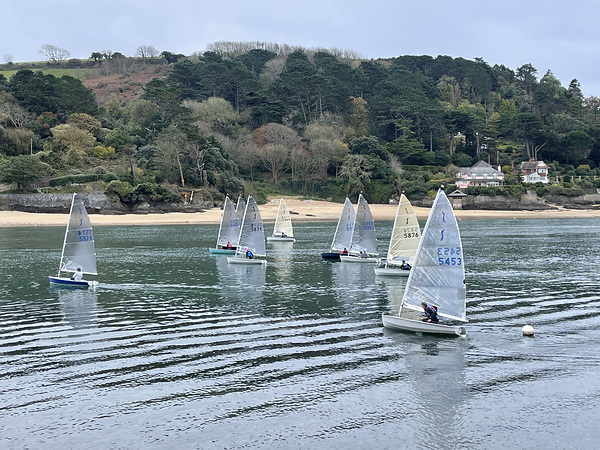 "No wind" the forecast said.

A fraction above no wind is what we got which kept some sailors away. Excuses for non-attendees were, "gone cycling in the living room" and "on such a light wind day, DIY is preferable" -  Fools, it was awesome!  Course 3,2,3,2,3,2 or, for those not in the know, Crossways/Millbay x 3. Non the wiser? Come to Salcombe.

Nine Solos meandered over the start line and split to both sides of the estuary.  Those on the East Portlemouth side looked like they'd nailed it until they got to the ferry landing!  Gavin Stevens, with his pretty yellow sail, rounded no.3 in the lead followed by a bunch of boring old grey sails with another lovely yellow sail/pink deck just after that and then more grey sails.

On the ebb tide the leaders were whisked away leaving two distinct groups. At the penultimate mark the second group caught the back of the first group just as the wind blew up to a whopping 4 knots providing some exciting racing and place changing right up to the finish line.  Boring grey sails were 1,2,3. Lovely yellow sails were a little after that.

Huge thanks to the Malcolm Mackley's race box team and those trudging around in the rescue boats.