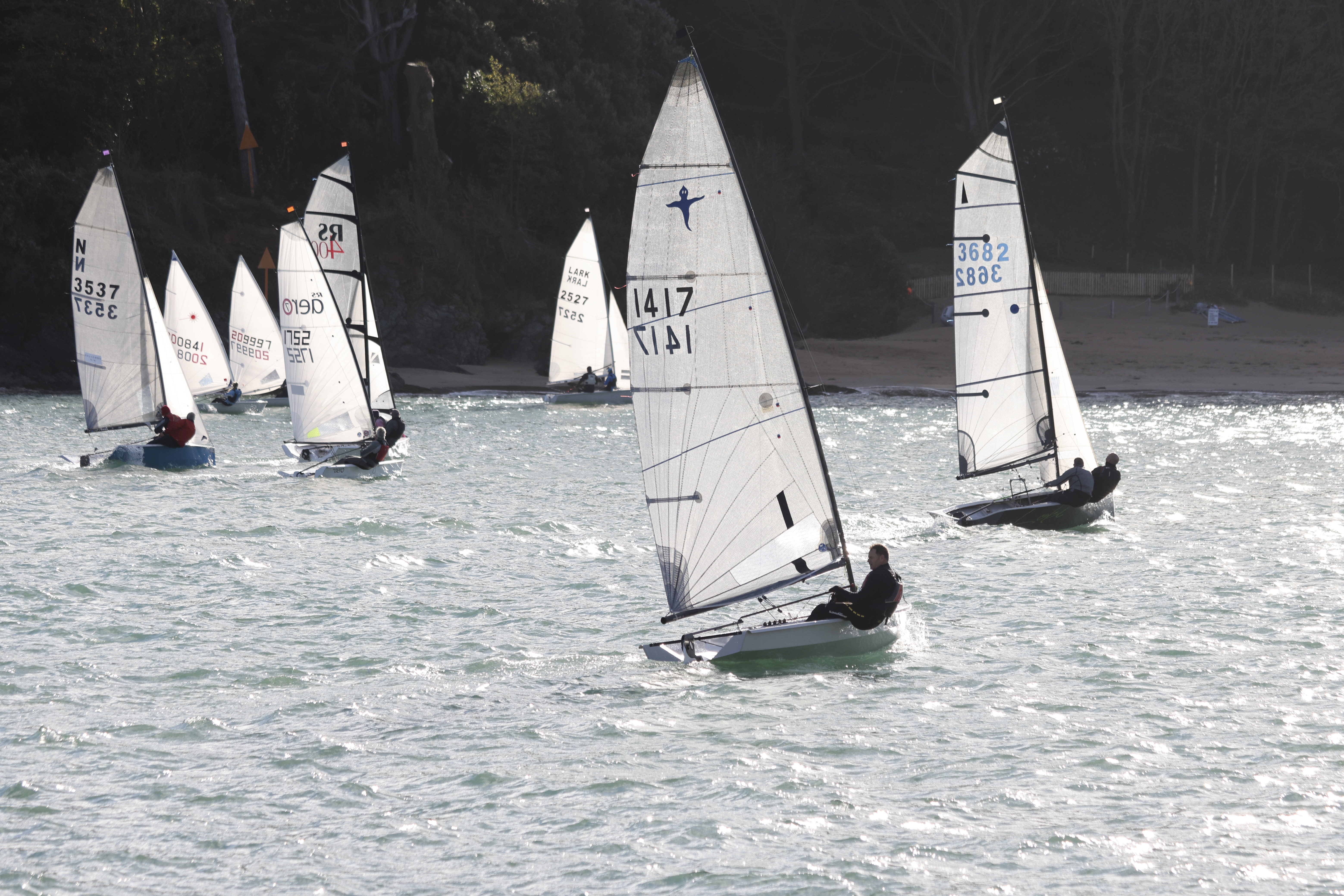 The SYC Sailors were greeted with glorious conditions this Saturday to kick off the first race of the winter series.

The wind was blowing in from the west but with large shifts thrown in for good measure.

Julian Hereward was the OOD and set a course of 1, 7, 1 ,3 for both fleets with the Handicap being the first away.

All the Sailors favoured the Portlemouth shore for their first visit of the day to BlackStone but it was team McLaren in the RS 400 who rounded mark one first, closely followed by Tim Fells and Ben Meek in the Lark.

It was classic 'Salcombe sailing' through The Bag where there were plenty of losses, gains and place changing but the Sailors were treated to a nice blast up to Gerston and back.

The McLaren's emerged around Snapes Point in first position with a reasonable lead over the chasing pack. Olly Alexander in the Phantom had navigated this stretch of the course particularly well and hauled himself up into second place upon exiting The Bag, closely followed by Fells and Meek with Dan Bridger in the Aero 7.

Ross Borne and John Burn in the Merlin Rocket had a torrid time on the leg back from Gerston. Once back in the harbour it was the Merlin that favoured the conditions and quickly dispatched the fleet and caught team McLaren rounding Blackstone for the second time, neck and neck.

Borne and Burn were somehow the faster out of the pair downwind, building a lead and rounding Crossways in first place which they retained to take line honours.

On corrected time, it was Fells and Meek in the Lark who took first place with Andrew Groves in the Laser Radial taking second.

Groves sailed a solid race showing that handicap racing is all about the clock! Bridger took third despite going for a quick dip on the final downwind leg.

There was also a lot of 'Monkey Business' going on from James Greenhill and Charlie Evans who borrowed John Burn's National Twelve. A capsize before the start meant that their race was effectively over before it had even started.

With the breeze well in the west, those Solos that started in the middle of the line fared best despite the flood tide as they reached Mill Bay without having to tack.

Chris Cleaves, David Greening and Simon Dobson lead this group whilst Tim Law was one of those that suffered by starting too close to the beach. On the long run to Gerston the boats behind caught the leaders and a fair amount of place changing took place as the fleet navigated the Bag. Robin Hodges profited by sailing low near Halwell Woods to come through to second behind Greening at Gerston, followed by Dobson and Billy Jago.

Malcolm Mackley caused a stir by capsizing right at the mark with a few boats having to take drastic avoiding action. On the long beat against the tide back to Blackstone, Greening consolidated his lead, Dobson established himself in second whilst Law and Cleaves joined Hodges and Jago close behind.

The group closed up once again on the run to Crossways and with a final beat against the tide in a gusty and shifty westerly to come, it was still anyones race. Greening sailed a solid last leg to victory whilst Cleaves made the best of a large wind shift off Fishermens to come through to second with Law third, Dobson fourth, Jago fifth and Hodges sixth - these six all finishing within a minute after an hour and a half of close racing. 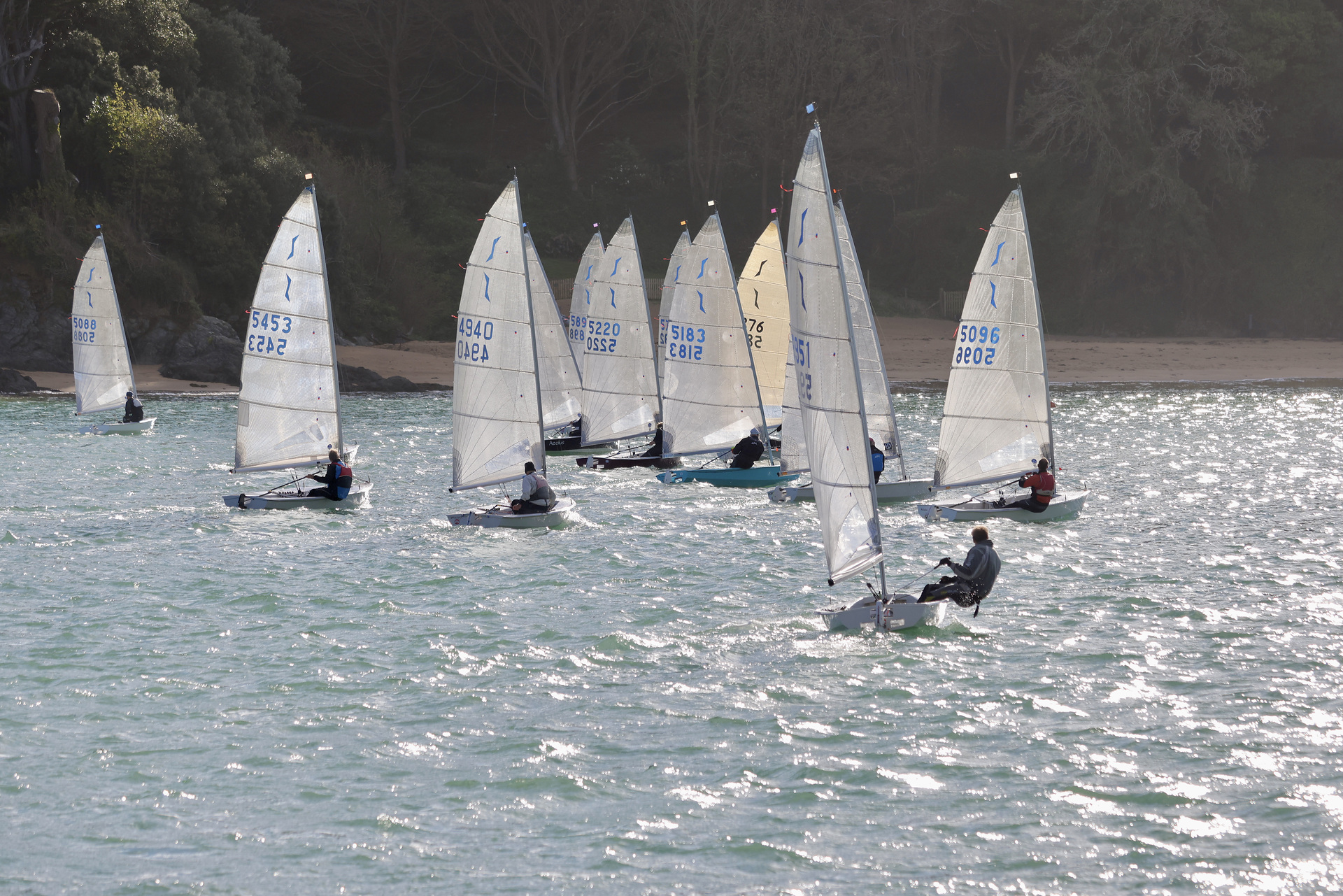