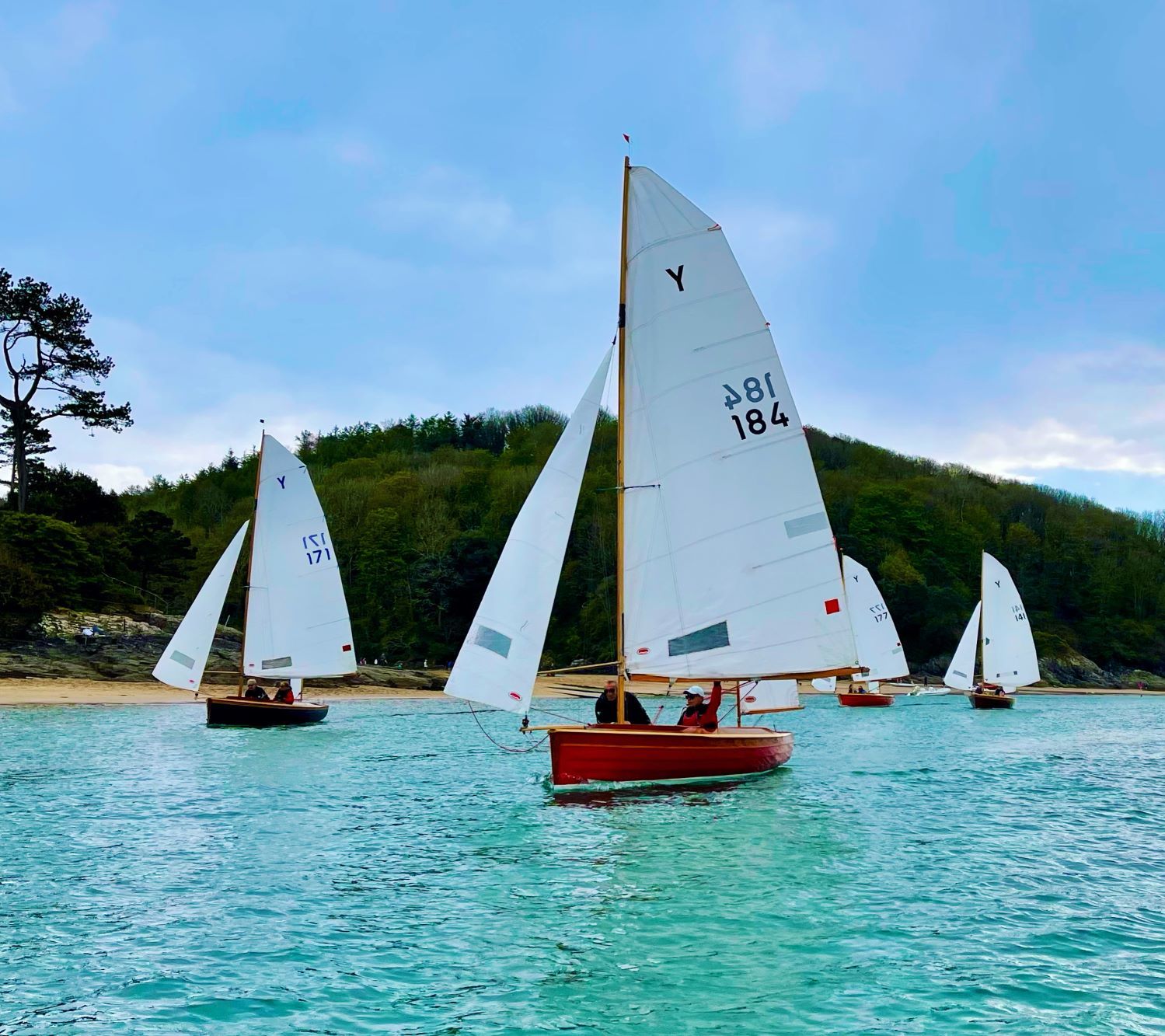 Twenty seven Salcombe Yawls with fifty four sailors emerged to take part in their first open weekend of the season.  The Red (modern) fleet and the Blue (classic fleet) were evenly divided, with thirteen Reds and fourteen Blues.  It was great to see several new participants in both fleets, both as owners jockeys and crew, which definately augurs well for a competitive season.

The Red Yawls were first to start with the Raysons and Stones making the early running at the Blackstone windward mark, however as the fleet reached the Ferry, a light Northerly breeze had established itself resulting in a restart, with the Raysons and Savells moving forward.  On the penultimate beat to Crossways the Raysons sailed themselves out of wind allowing the Savells to round in the lead followed by Greening and Gifford, with Will Henderson and Tristan Stone working through to third.  Greening and Gifford kept the breeze on the run to round the final Mill Bay mark ahead of the Savells and Henderson Stone combo, who were to finish in that order, barely a bowsprit apart.

In the Blue fleet Paul Ellis made the best of the beat to Blackstone. Mike Knowles and Mandy Henderson with Simon Dobson were also in the mix at the Crossways mark.  The long run back to Blackstone in patchy pressure challenged the teams to maintain momentum, however Paul Ellis and James Greenhill took the gun having never been headed.

Sunday morning saw a change in PRO, with Chris Cleaves on the Watch House deck.  A light breeze out of the south west quadrant, saw a course set into Yalton Creek, making best use of the high tide, followed by a look of the harbour.

After the first beat the Red fleet bunched up on the run through the harbour, and opinion was divided upon the best route into Yalton.  There were plenty of snakes to land on, but Mike Webster and Sue Proudfoot sailed a consistent race to take the bell, from Will Henderson and Tristan Stone.

In the Blue fleet Ellis and Greenhill were sucking on diesel and did a great job managing the long beat back from South Pool.  As did mother and son team Anthony and Allyson Lofts. Mike  Knowles and Mandy Henderson conceding an early lead to take third at the gun.

Following a brief sojourn for lunch the fleets reconvened for up and down races in the harbour.  The Red fleet misbehaved and received a general recall and were sent to the back of the queue, which allowed the Blue fleet to start first.

With a left hand biased line and a strong ebbing tide under the fleet at the start. Steven Galvin and Tim Fells (relieved or RO duties) finally a) turned up and b) found top gear. They did a horizon job on the fleet in tricky conditions. They never put a foot wrong even in the declining pressure at the end of the race.

The Red fleet got away cleanly on their second start, with Clive Jacobs and Simon Gibbens leading at the windward mark.  The fleet formed in a line at Snapes for a starboard reach into the Crossways mark, with much argy bargy, with Jacobs and Gibbens the Savells and Raysons emerging with the least messy rounding.  As the breeze died, the Savells prevailed from Jacobs to take the win.

So, the Red fleet saw Will Henderson and Tristan Stone take the overall win having repurchased Storm less than a week before the event, and without winning a race, demonstrating how competitive this class is.  Mike Webster and Sue Proudfoot sailed a consistent series to take second from the Raysons.

Paul Ellis and James Greenhill dominated the Blue Fleet with the ever consistent Mike Knowles and Mandy Henderson in second and arrivistes Graham and Fiona Cranford Smith posting an outlying net third.