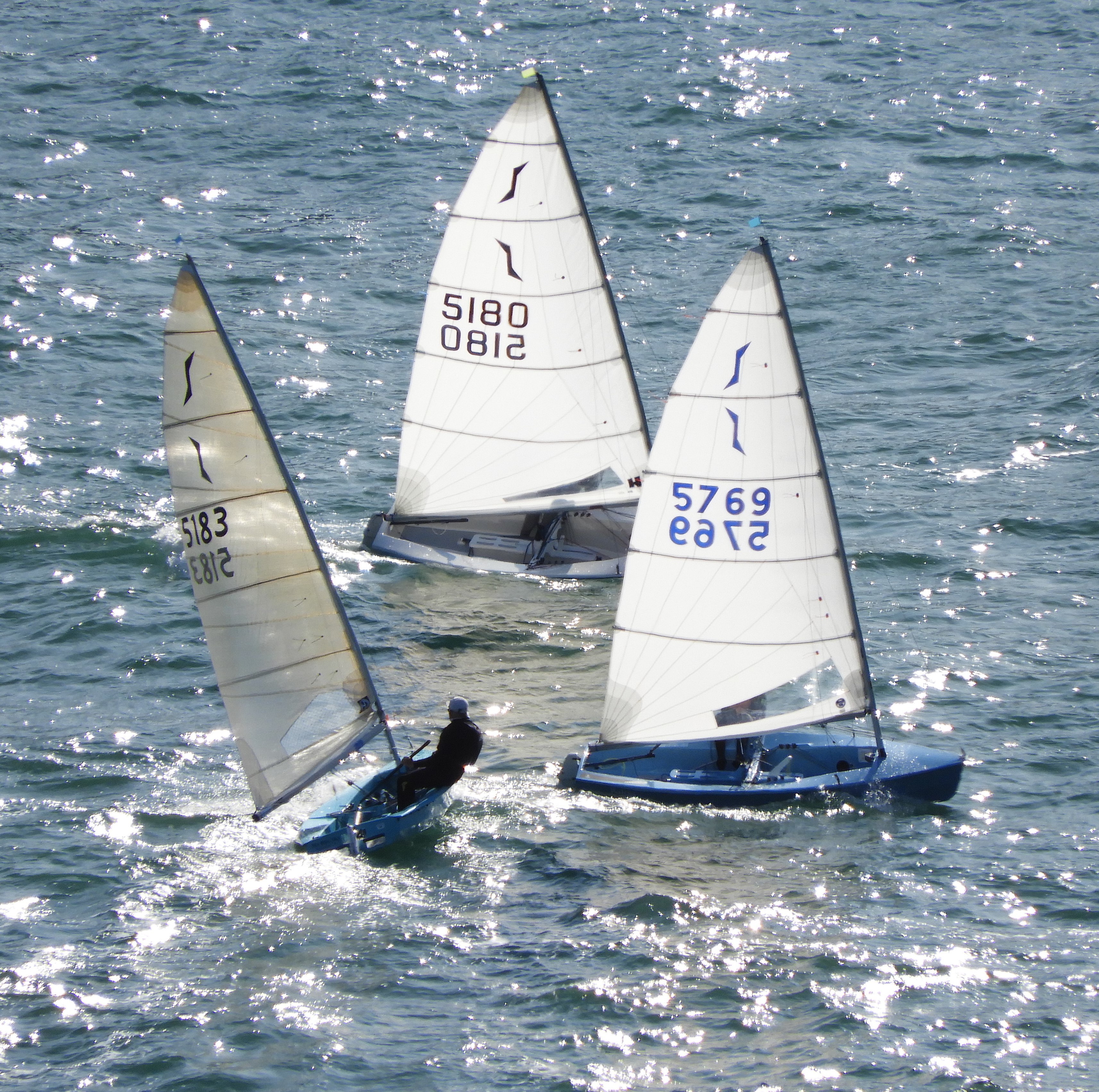 The Autumn Tyler Trophy Solo open meeting made it into the class fixture list this year. Consequently, the attendance was improved over 2018.  Even so Salcombe is miles from anywhere (hence its attraction) and has a richly deserved reputation for being somewhat difficult. Happily, the net effect was that twenty-four specialist Solo practitioners made the start line on Saturday 19th October. We all looked forward to a smorgasbord of four races over two days. We were not disappointed.   The event coincided with what turned out to be very benign conditions in bright sunshine and on day one, a moderate breeze with a westerly component.

Though nominally an open meeting, almost all of the competitors were drawn from Salcombe Yacht Club's excellent and established (i.e. superannuated) Solo fleet. We were joined by two or three visitors. Very welcome they were too. Thank you for coming.

Race 1.  On an ebbing neap tide the fleet swept majestically to Blackstone like a swarm of, well, Solos. There were some large shifts on offer. It was possible to make a real hash of this short windward leg. This was as graphically depicted by your correspondent who was able to witness most of the fleet round ahead onto a long run to Gerston against the tide.

Like free climbers, the fleet made a beeline to cling the Portlemouth shore rocks (as captured by Margaret Mackley) and specifically Biddle Head. Biddle Head is home to many a Winder centreboard because it is a good place to be when against the ebb.

Simon "Yotter" Yates always takes this part of the course seriously. He appears to regard navigation of Biddle Head (and Saltstone, famously) as an ace in the hole to gain an advantage.  Not for him skirting the rocks at a respectful distance.  No. This day he took matters to a new level. Despite any patent presence of water in the cluster of rocks that is Biddle, he chose a route into what appeared to be no more than a small rock pool. There was no obvious exit. He duly vanished with waves crashing around him; only his mast and sail were visible. Expecting disaster, we were all amazed when he emerged serenely a few moments later with his boat actually intact. He was smiling beneficently, as is Yotters way.  Complete respect at Yotter's exhibition of Extreme Biddling.

Sailing at Salcombe is dear reader, the antithesis of open water courses. It is very amusing. New verb: to Biddle.

Thence the fleet made its way to the Portlemouth Ferry steps and beyond, where one by one we peeled to the Town side and the waiting joys of Snapes Point.  Here the fleet reset at this tidal gate. The lucky and skilful crossed low to Bungalow Point. Others were tempted by the siren of a Westerly and staying high. They looked good for a bit but as so often when in the environs of Black Knob Point, they lost pressure.

Law, Clark and Gibbons led and stayed low to Oxe Point. They then crossed to the pontoons in fitful puffs: classic routing.  Here Greening played a joker. He disappeared off into the pontoon trots like a Pied Piper, taking quite a few with him. Greening in particular initially appeared to gain an advantage.  Meanwhile, others like Clark and McGregor had stayed low all the way to Halwell Woods and remained well in contention.  Somehow the absence of Egremont makes this tactic more viable than heretofore.

But lack of wind at Tosnos slowed those such as Greening. The outside pontoon merchants had by then made hay in better pressure. They were able to slide off to leeward to join Clark and others on the lee shore.  Gibbons who has sailed these waters since he was a child, sailed beautifully and edged into the lead with Clark close behind.

The fleet thinned.  By Gerston the front runners trailing Gibbons and Clark included Yates, Rayson, Cranford Smith and Law.  Guess was never far off the pace.

Race 2.  The course here comprised three laps of the harbour being mark 1 Blackstone and mark 3 Crossways in what proved to be a dying breeze.

Law asserted his authority on the race from the off. The fleet split into two, courtesy of some big shifts on the first beat.  Your correspondent was firmly in the also rans so was not placed to report first hand on how matters played out.

On completion of the second lap the wind went super light and the race officer spared us further agonies.  At the gun, Law, Rayson, Guess.

Race 3.  Sunday.  Here we were greeted by ice blue skies, crushed diamond water, a northerly 10 -12 knot breeze with a brisk air temperature.  And still no ribs.

The start coincided closely with high water. Nevertheless, the fleet favoured the Town end of the line, the course dictating a long beat to Gerston. Again, Law made the early gains closely pursued by Guess who then took the lead in an impressive display.  The pair were closely pursued by Greening who has, he will tell you, the body of a forty-one-year-old despite appearing quite obviously not a day under sixty. This was in contrast to Cranford Smith, just behind. His body is definitely felt nearly sixty-two after a long port tack to Gerston while trying to out-grind Greening.

The whole fleet remained in close contention, but at Gerston the order was: Law, Guess, Greening and Cranford Smith.

There followed a long run to Millbay with a hook to the finish.  Cranford Smith edged mark room off Guess who had faded on the run, to narrowly claim third behind Law and Greening.

Race 4. By this time the northerly breeze had built into Cunno territory at times, with a strong refrigerant element.  Race officer Dan Bridger, set us a decent three lap windward leeward between Crossways and Blackstone in a by now, briskly ebbing tide.

At the start a small cohort including Cranford Smith and Jago favoured the Town side.  This group picked up a very tidy lift out of Batson which as if by the hand of the Almighty, lifted them all the way to Crossways lo, sans tacks.  Cranford Smith and Jago made the best of this. They arrived at mark 3 in somewhat better shape than those who has opted for the Portlemouth shore. Here much roll tacking and other insurrection was taking place.  This was gratifying scene for some. In particular Law effected a very uncharacteristic capsize, leaving him much to do.

Somewhat to your correspondent's surprise this left Cranford Smith with the fewest points of the weekend. Law had recovered to ninth in race four but was counting a seventh from race one. This left him second in front of Guess.

Final point. Each week SYC correspondents are tasked with weaving a phrase of the moment into the race report copy.  This is beyond me because folks, I won. But here is the phrase anyway: Dark cloud under a rainbow.

Topographical references are courtesy of Greening at whose feet we all learn.  It has only taken ten years. 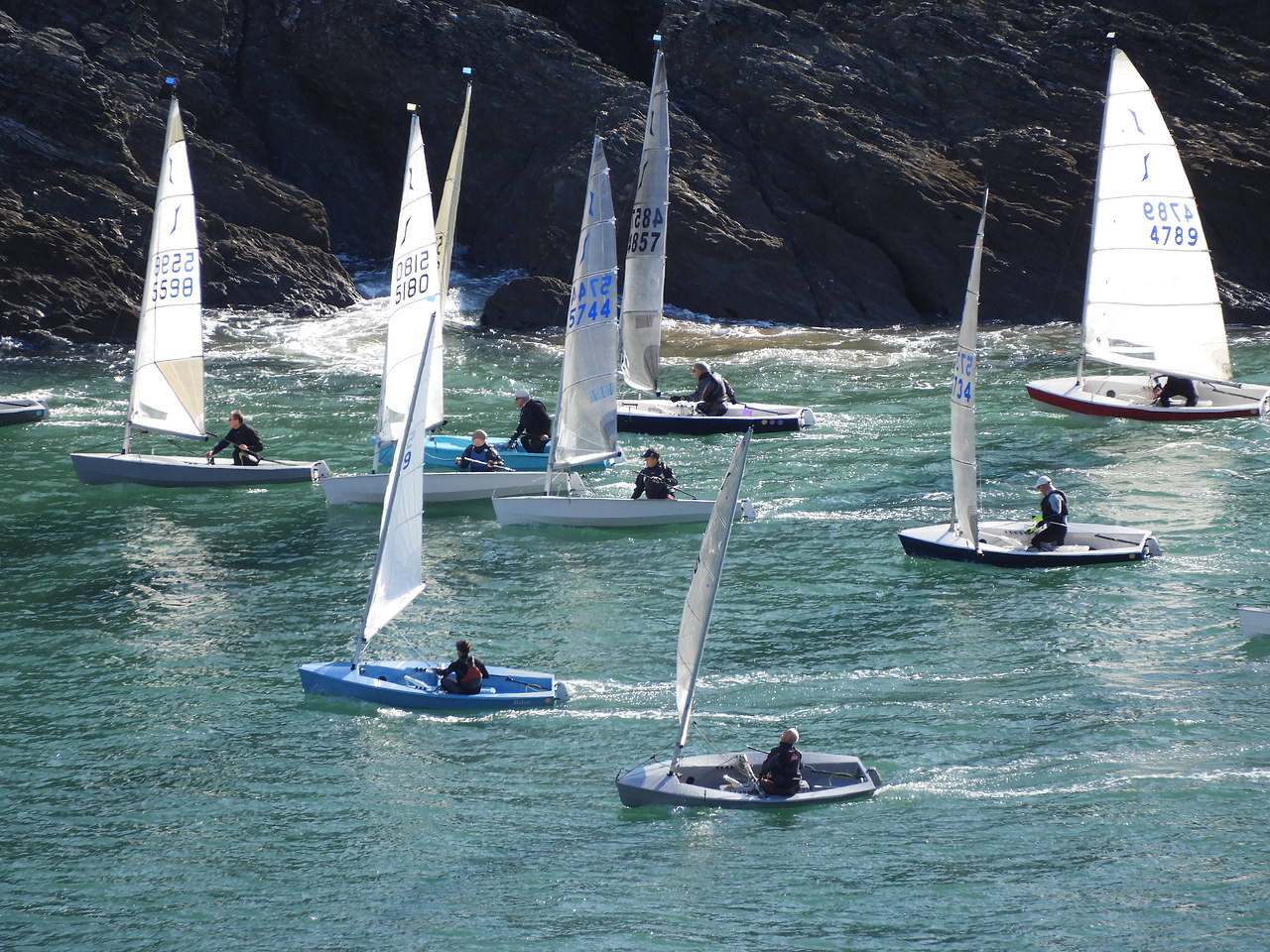 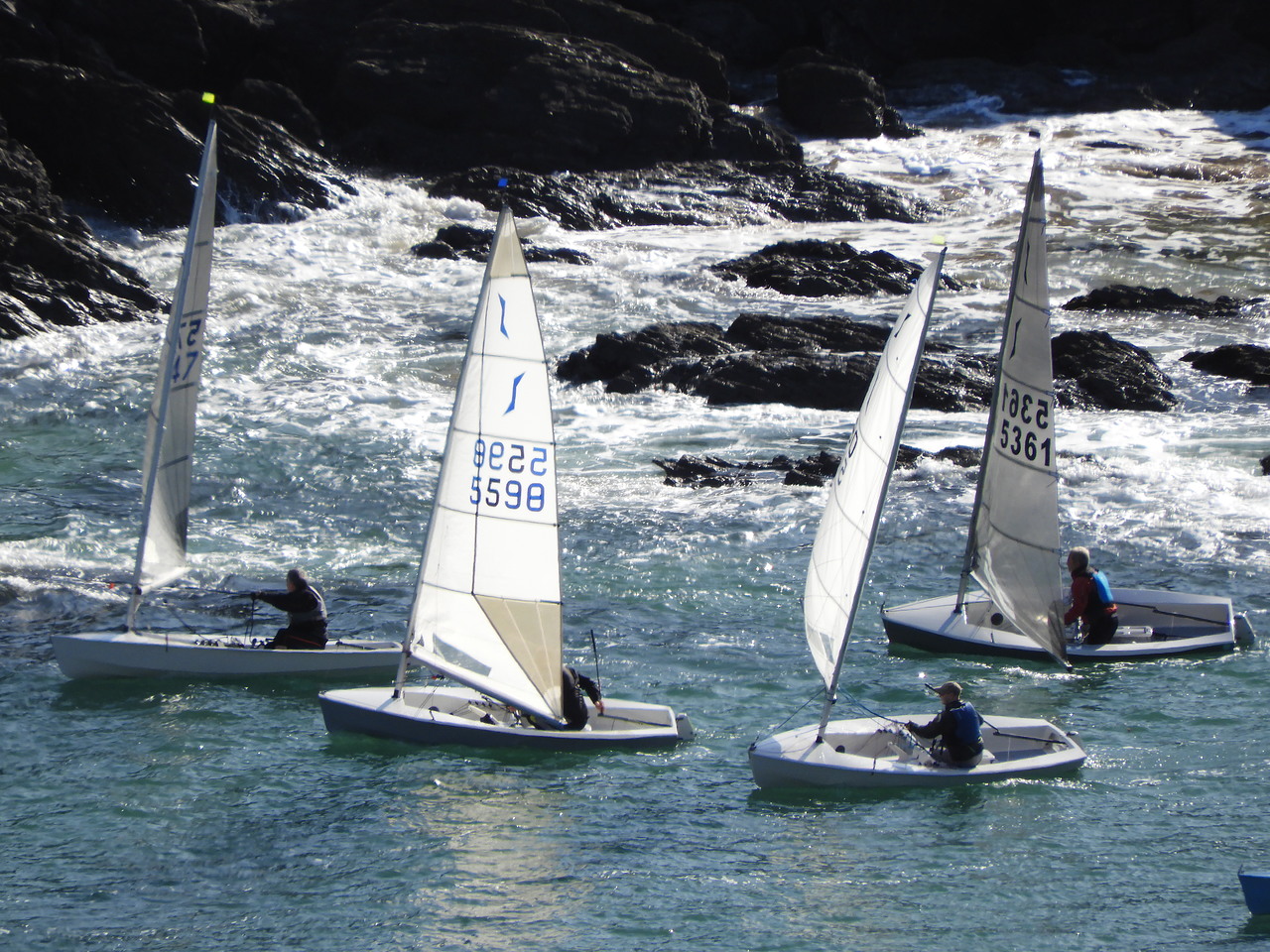