After the first 2 races of the Spring Series had to be cancelled due to the weather, Saturday 26th of March welcomed near perfect racing conditions for the sailors. 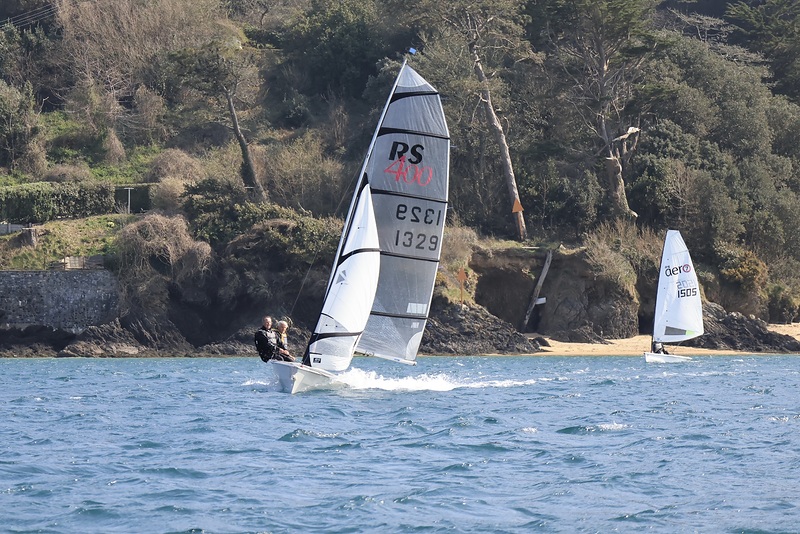 Race Officer Dan Bridger set a superb course 4-1-3-1-3-2 for the sailors to sink their teeth into.

Unfortunately only 5 boats headed out in the handicap fleet for the start, 1 RS Tera, 1 RS Aero, 1 RS 400 and 2 Merlin Rockets, one of which was fashionably late, Ill leave you to work out which one ?? 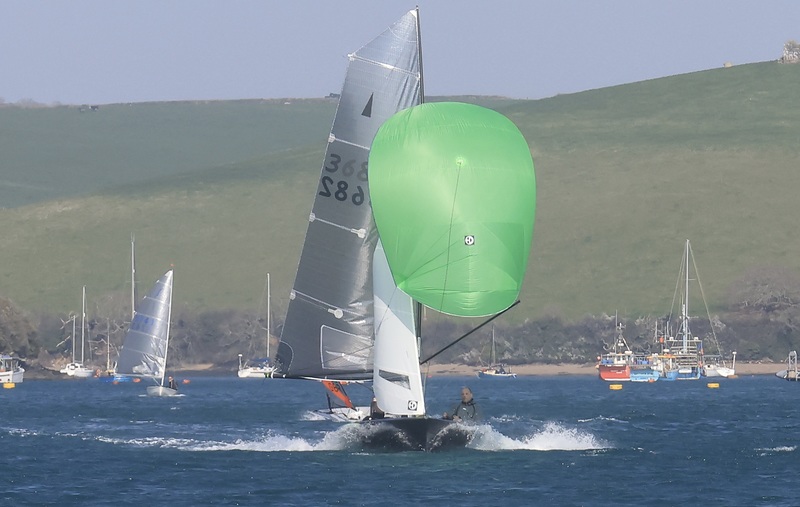 The first beat to Yalton proved to be a real test of stamina with a strong breeze blowing down the creek and with gusts nearing the 30 knot mark.

There was an early swim for Tim Fells in the Aero near Crossways, as Peter Colclough and Pete Bennett in the RS 400 chased after Ross Borne and John Burn in the Merlin. 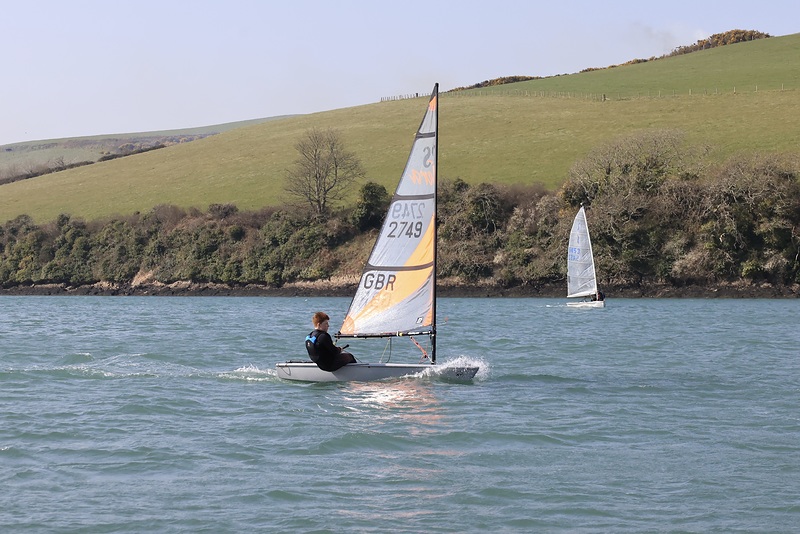 Edward Alexander in the RS Tera sailed extremely well in the tough conditions and made his way up to Yalton with no fuss. 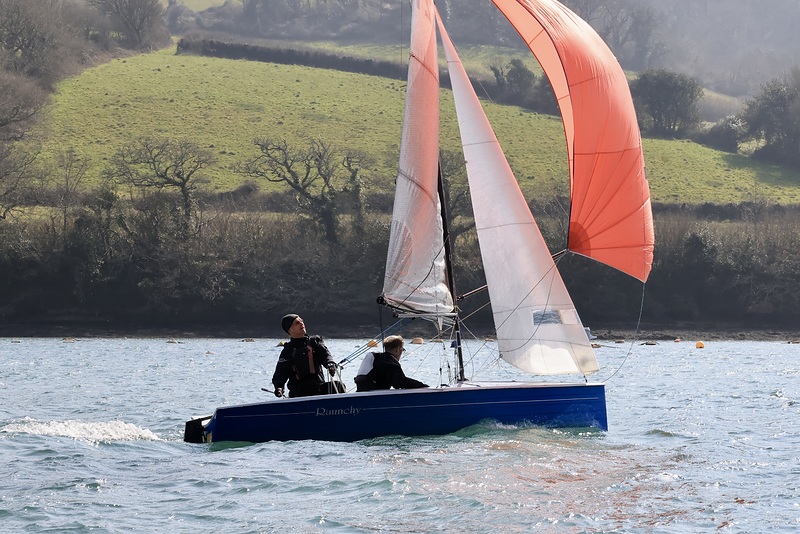 AJ and Tris Squire had a fair bit of ground to make up in the second Merlin and slowly started to reel in Edward and then Tim, although catching and passing both on the water, it wasnt enough to beat them on corrected time. 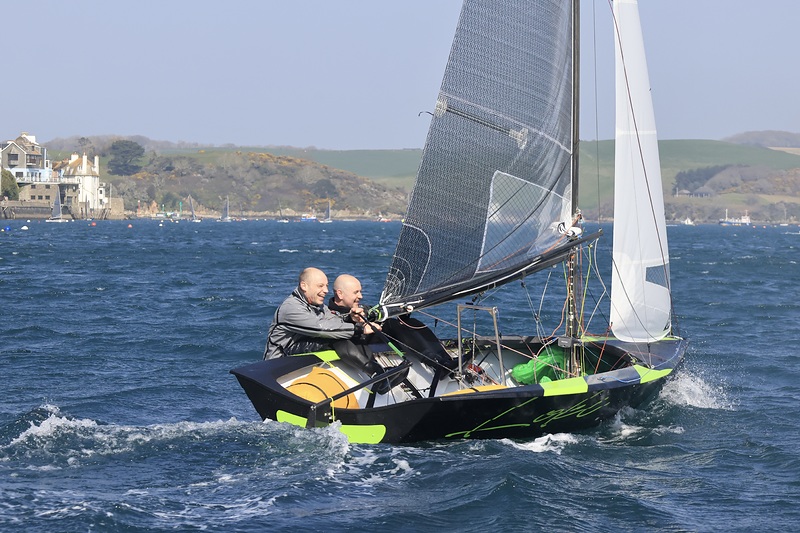 Ross and John once again led from the start building an impressive lead, they took line honours and on corrected time took 1st place making it 2 wins from 2 for the pair. Tim was awarded 2nd for his efforts with Peter and Pete taking 3rd.

It was great to see Edward out, he really is a fantastic sailor and continues to impress us all, keep up the good work!

Thank you to Dan and his team for running a great race. 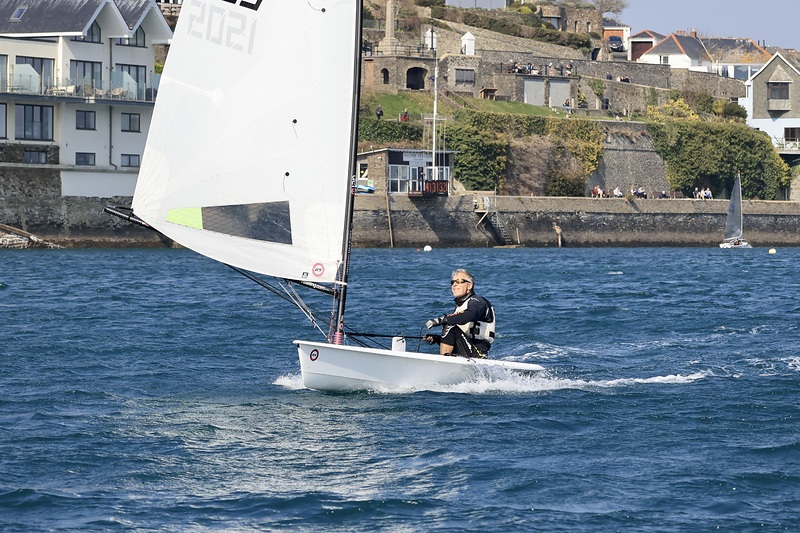 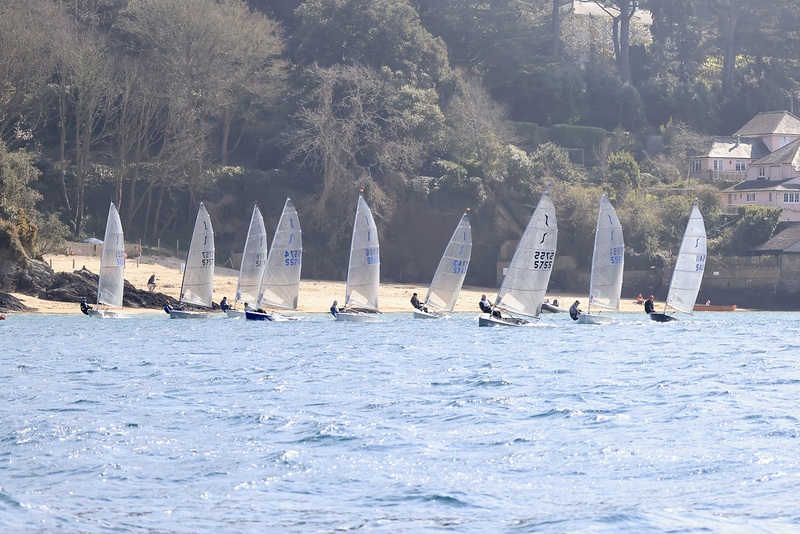 Thirteen Solo sailors came to the start line, and having watched the earlier Handicap start, were divided on strategy, with some working the East Portlemouth shore, others heading through the harbour under the protection of Snapes to escape the tide and the undecided down the middle to make best use of the pressure. 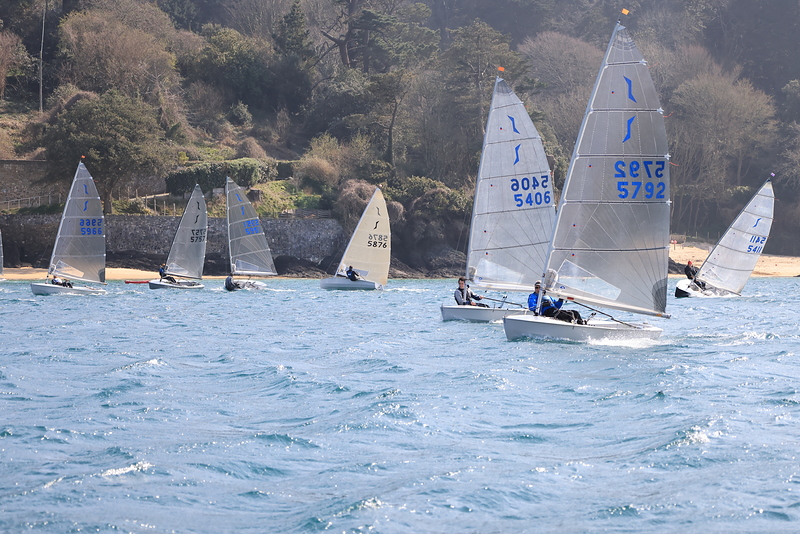 Chris Cleaves led around the Yalton mark and built up a healthy lead as the pursuing pack crossed tacks and could never sail the optimal route, David Greening and Paul Ellis followed, with Tim Law and Billy Jago completing the front runners. 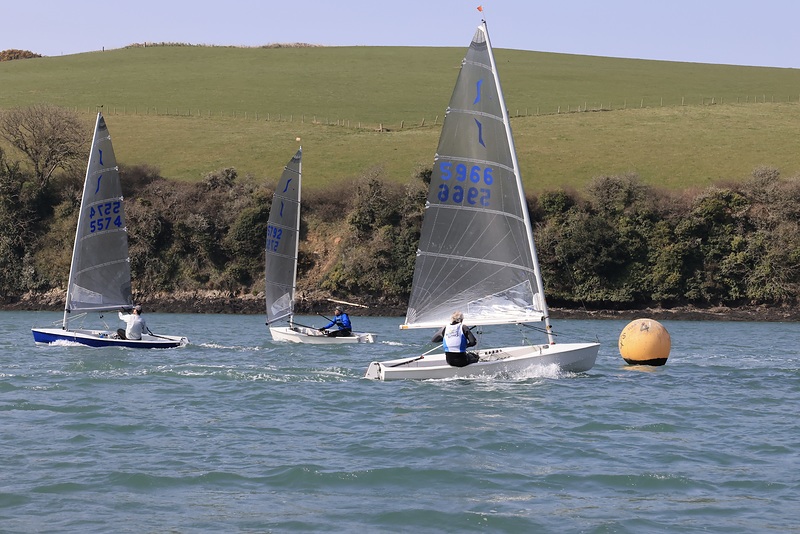 With gusts approaching 30 knots blowing down the creek, even the front runners did some mining down the run.  Cleaves led into Blackstone followed by Ellis and Law. 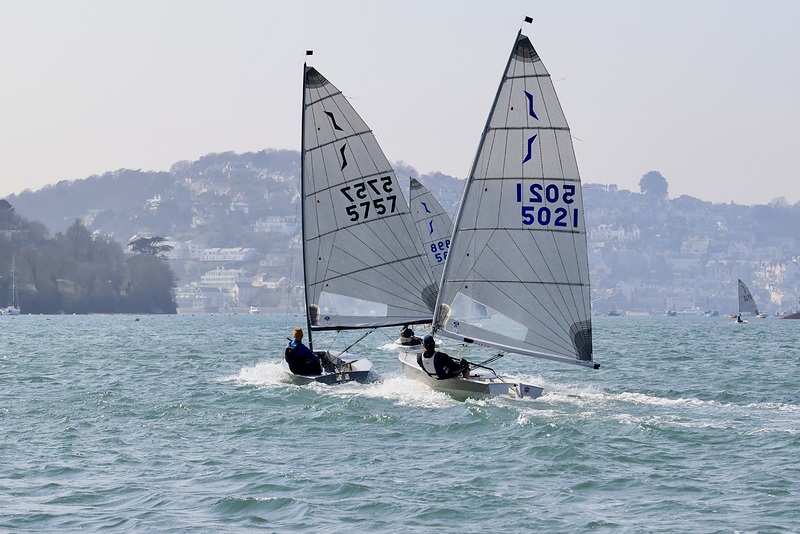 The short tacking beat back to Crossways along the Salcombe shoreline proved a test of fitness versus winter lard, with Ellis closing in on Cleaves and Greening closing on Law. 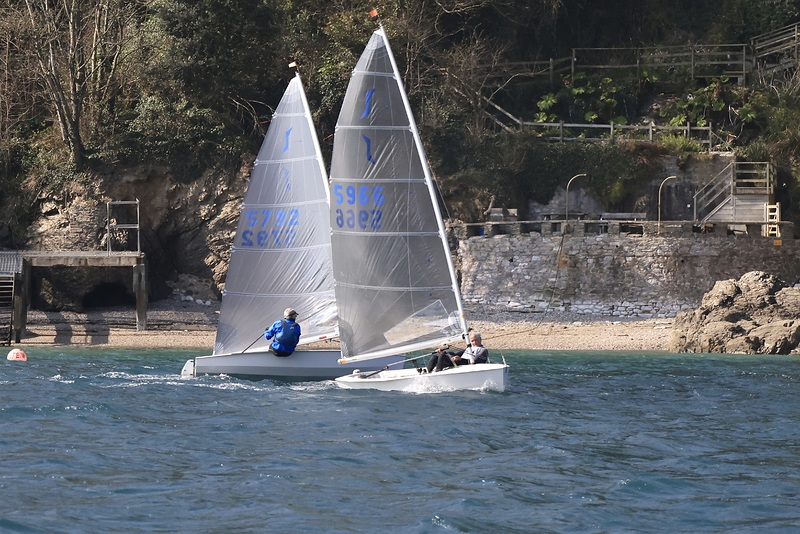 One more lap of the harbour, and a shorten course saw the lard win out, in the shape of Chris Cleaves, with Paul Ellis denied the opportunity to demonstrate the benefit of his younger years and probably being the only person in the fleet not to be grateful for the Race Officers decision, Law completed the podium. 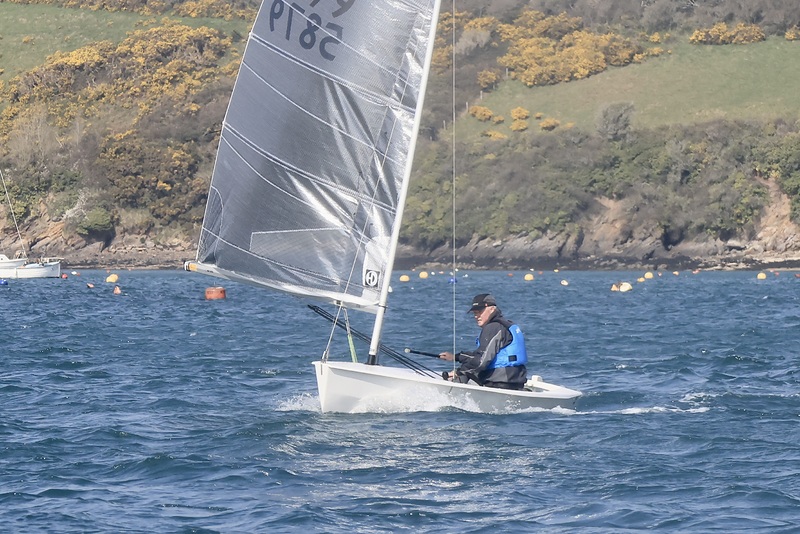 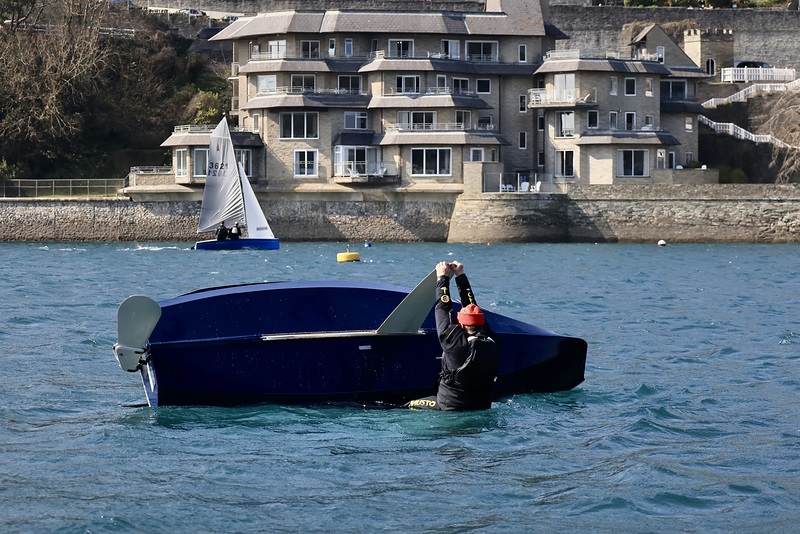