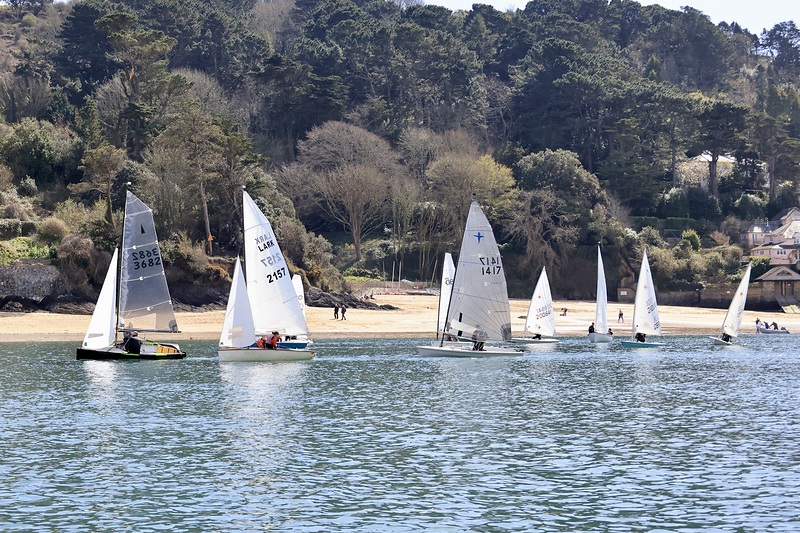 With light E-NE winds and a spring low tide to contend with it wasnt looking overly inviting for the sailors of SYC on Saturday.

The course 7-X-3-X with X being laid between the Watch House and Mark 2.

That being said, it was fantastic to see a bumper turn out of 13 boats in the handicap fleet with a couple of new additions as well as some familiar faces. 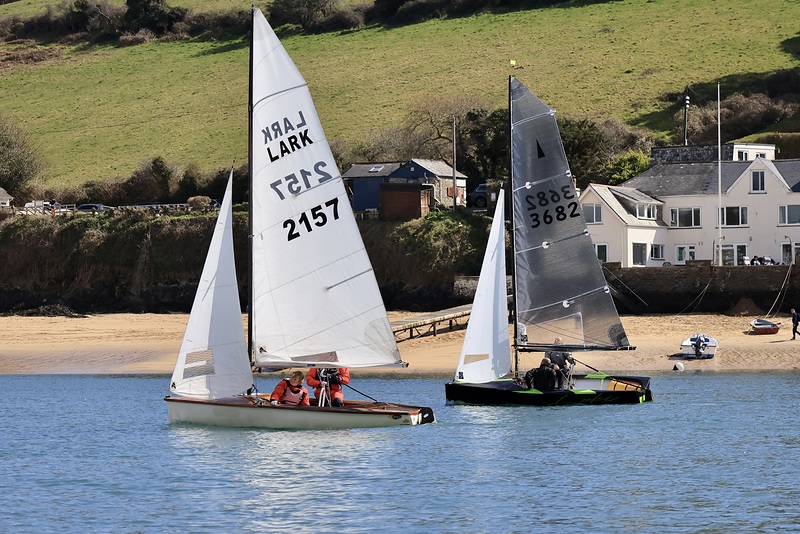 The fleet, all away cleanly, soon split with an early get away for the Borne/Burn Merlin, Henderson Lark, Alexander Phantom and Henderson/Markham RS200.

The tricky conditions in the harbour were thankfully not continued in The Bag, there was hiking and planing to be had making this section of the race the most enjoyable for the fleet. 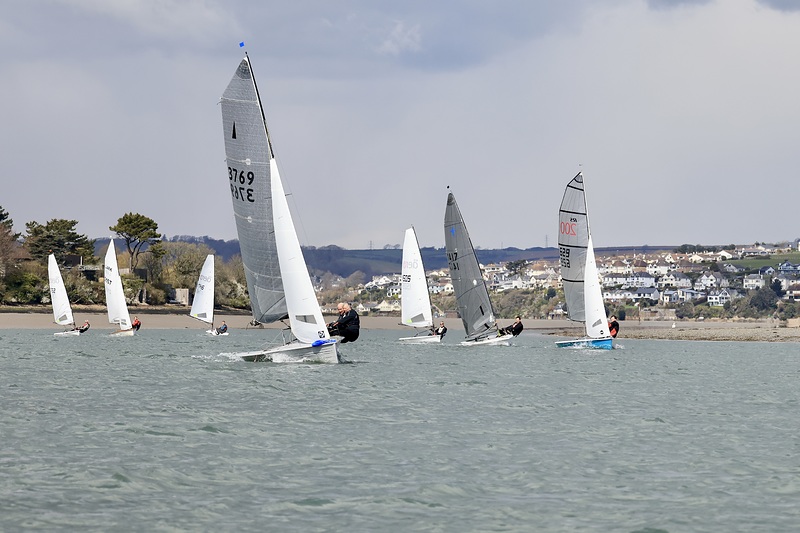 The Borne/Burn pairing had managed to break away from the fleet through this section of the race and build themselves what they thought would be a comfortable lead, this however was not to be. They found themselves stuck in a hole in front of The Watch House whilst the rest of the fleet cruised up on breeze from behind. 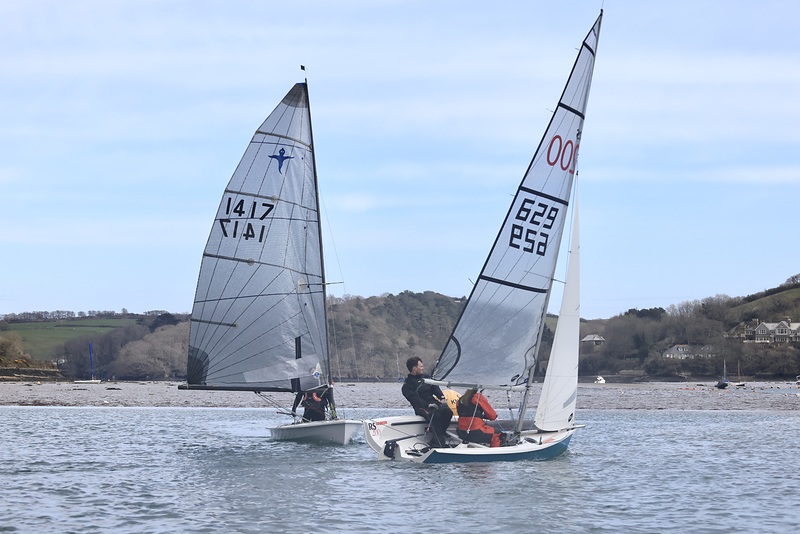 The Cranford-Smith Merlin was to benefit from this as they overtook Ross and John taking the lead of the race in true Salcombe fashion, and that's all I have to say about that……….! 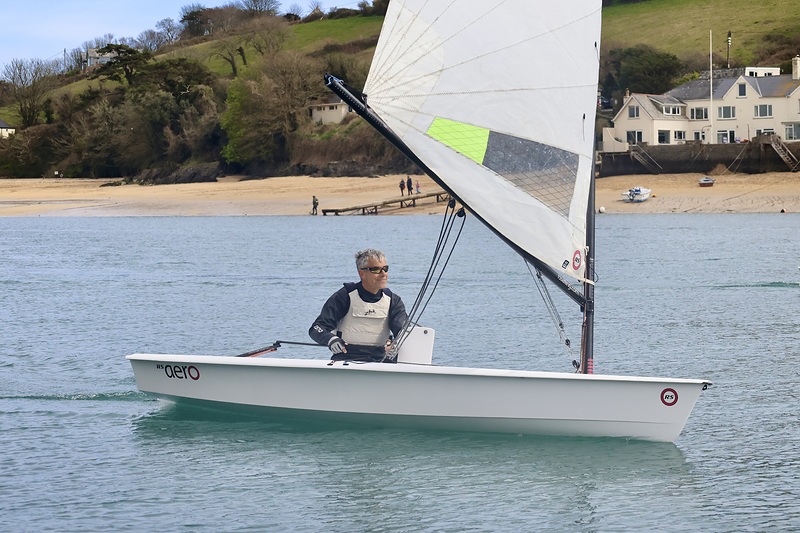 The true battle though was unfolding behind  as 5 of the fleet all found themselves in a line heading for the final mark, Rob Henderson and Alice Markham in the RS200, Will and Mandy Henderson in the Lark, AJ and Sheila Squire in the Albacore, Simon Ballantine, Tim Fells and Dan Bridger in Aero 7s. 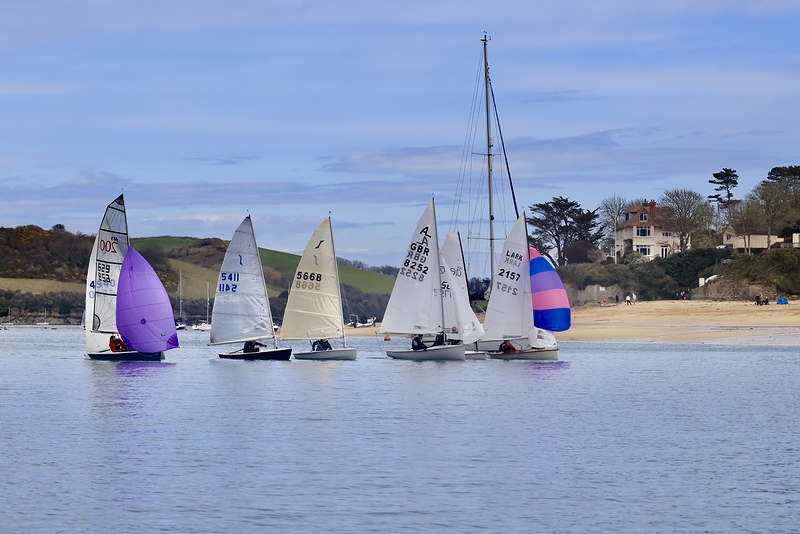 On Corrected time it was, yes you guessed it, Will and Mandy taking 1st place on their first outing of the season with Tim 2nd and Simon 3rd. 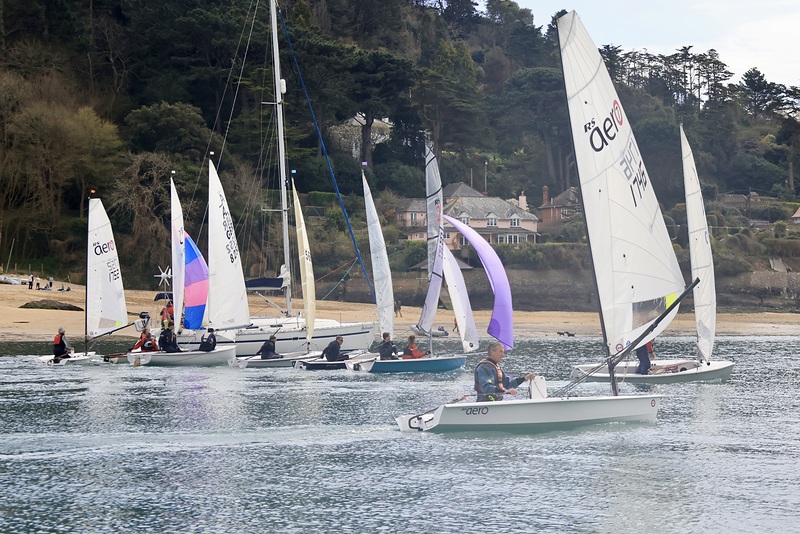 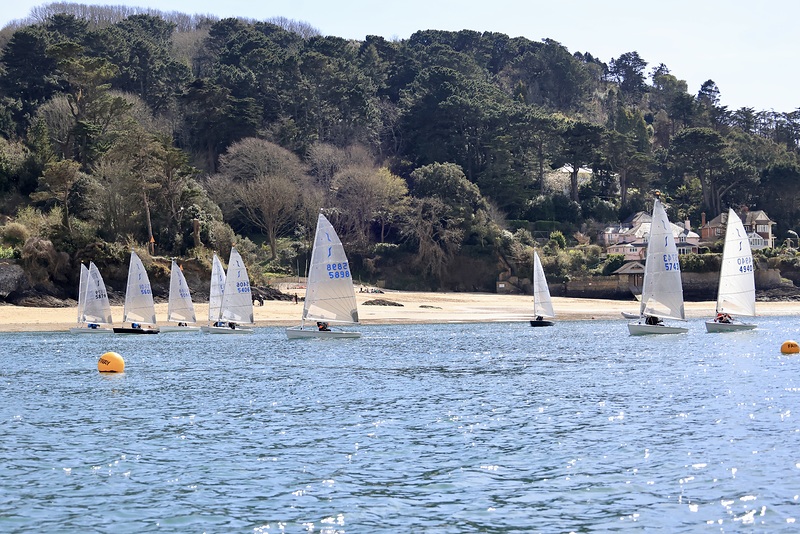 The thirteen strong Solo fleet had the benefit of learning from the Handicap fleet that had started 10 minutes earlier.

The strategic decision was whether to play the percentage game on the route to Snapes Point by taking the leeward route into the harbour with less tide or to start off the Portlemouth shore should the wind fill in at the start. 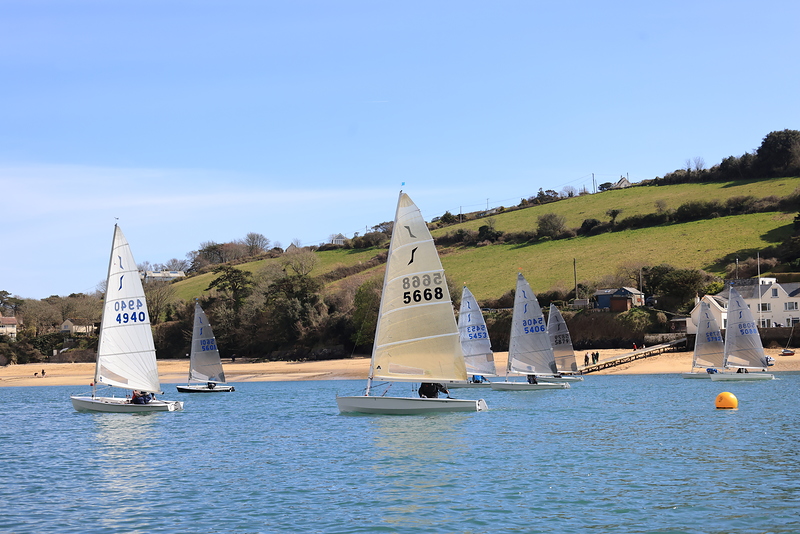 Simon Dobson and Simon Yates were most leeward and footed out through the Yawl trots, and were joined by Chris Cleaves and David Greening who both started off the beach end. 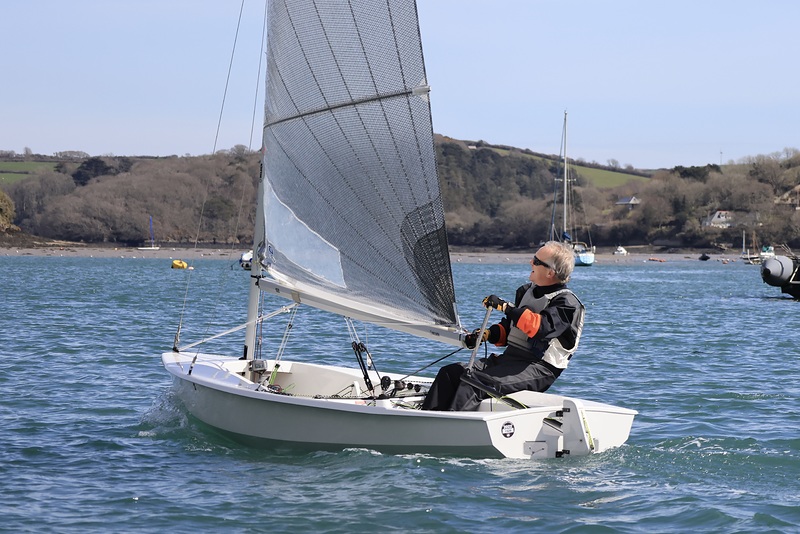 Nigel Blazeby was also in the mix, but lost out when he had to tack out to clear Snapes Point. 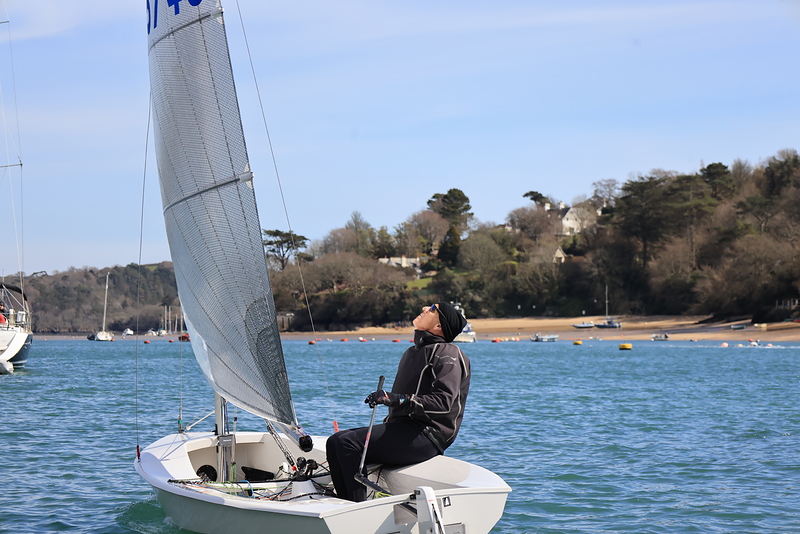 This was possibly the most exciting part of the race, since having rounded the point, with few (actually one) tacks in the upper reaches of the harbour, which whilst scenic, offered few passing opportunities, though scraping over Dendridge Ledge added to the interest. 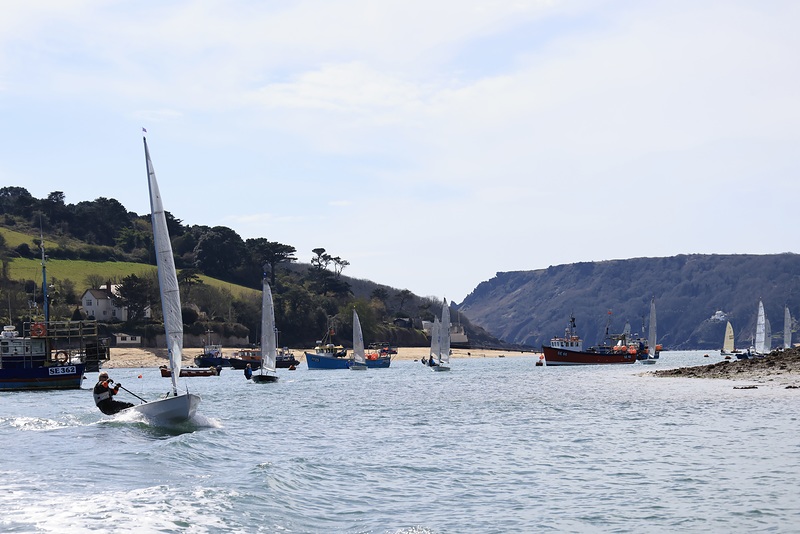 Upon the fleets return to the Harbour, Dobson continued his majestic journey to victory, followed by Yates. 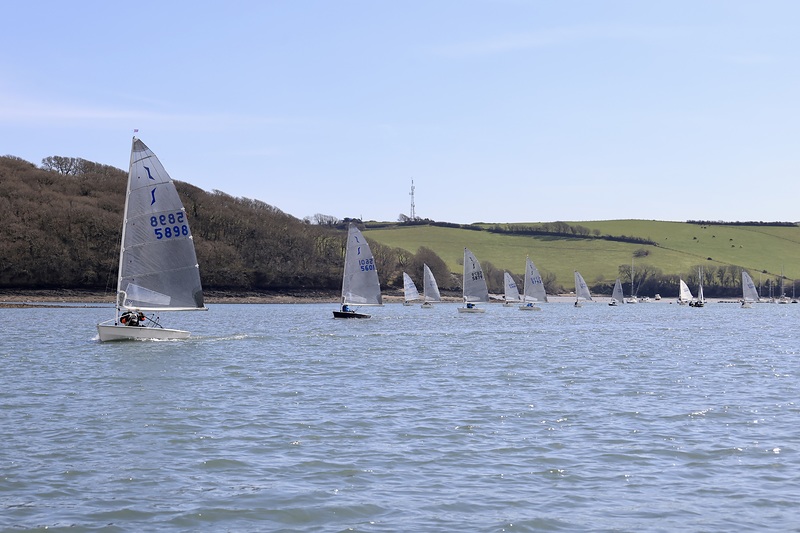 There was some excitement at the final X mark, when three Lasers closed the door on Chris Cleaves, consigning him to third, Greening fourth, and new to the fleet James Greenhill taking the overtake of the day prize (well the only overtake of the day) to pip Bill Jago into fifth. 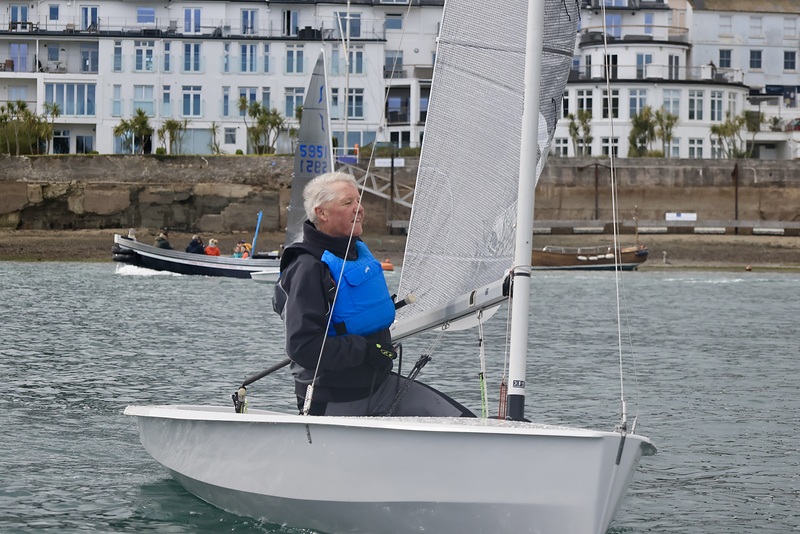