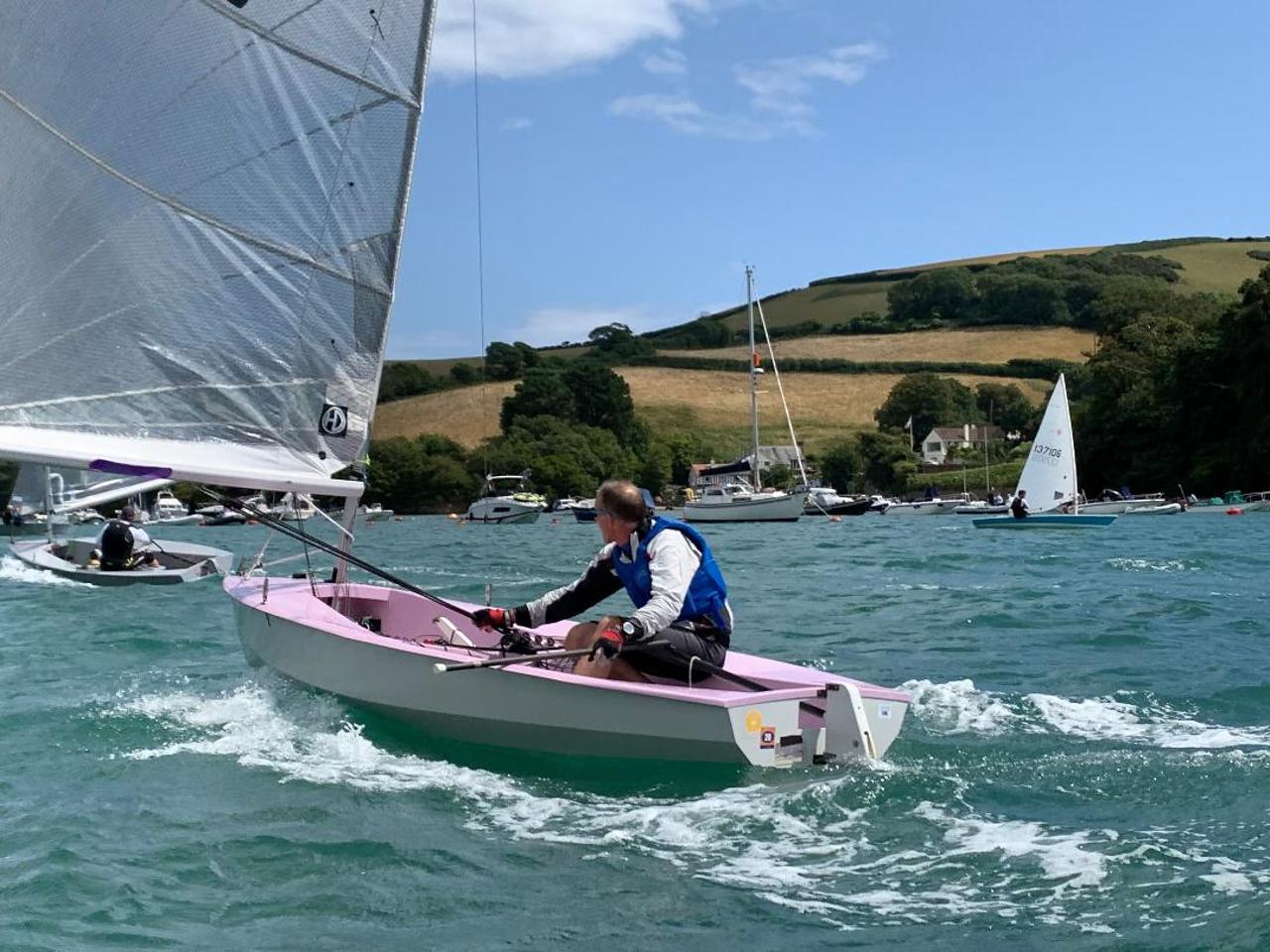 Once again the sun shone and with the high tide coinciding with the race starts, the full extent of the Kinsbridge Estuary was available to OODs Graham and Tessa Pike for racing and the course was nicely set with a hard beat to Blackstone into a very fresh but gusty sea breeze, followed by a run to Yalton and trips to Frogmore and Gerston before heading back to the finishing line where the sea breeze had met the pressure wind causing some frustration and confusion.

In the Cadet class Izzy wood comfortably won the junior race and dealt with the testing course and gusts with determination. One of the main highlights was watching boats squeeze past number 3 mark which was at times, crowded by a very large moored super yacht which left very little room to pass. The Saturday race marked the end of the Summer Series and the overall winner was the second placed Topper of Saturdays race, Dom Holt Wilson.

In the Medium Handicap the Laser Radials of Ru McColl and Penny Guess pulled out a big lead on the rest of the pack and enjoyed some close racing right to the finish. Ben Meek in his Laser 4.7 knowing he had the handicap advantage over the Radials sailed a lonely but very effective race. Just behind Ben, the trip back from Gerston enabled the two Feva's to use their asymmetric spinnakers and ensure they kept in touch with the Lasers and in the end Ben managed to find a winning margin on handicap of a minute over Penny Guess who sailed her Radial into 2nd position just 18 seconds ahead of the Groves' who managed to overhaul the Langley Feva  with the finish line in sight to take 3rd. In a series which has been extremely competitive and hard fought the final series placings were Ben Meek from George Alexander in a laser and Andrew and Lewis Groves 3rd. At only 12 years old the future is very bright for Ben and very frustrating for the rest of the fleet who will all have to up their game.

In the fast handicap the Alistair Morley Phantom won on the water  from Paul Ellis in another Phantom with Peter Colclough and Peter Bennett in  a RS400 third. Alistair also won the series in an impressive way befitting one of the clubs most able dinghy sailors with  further Phantoms of Olly Alexander and Bruce Hattersley filling second and third places in the series.

There was a welcome return to club racing by Tim Law in the Solo fleet. Tim recently secured an impressive third place overall in an eighty strong Solo Nations Cup fleet at Carnac in France and once again showed his skills by winning the club race from Simon Yates and Simon Dobson.

Now that the regatta season is close approaching, more Salcombe Yawls are coming out to play and Simon and Victoria Gibbons took the winning bell from Andy and Elizabeth Savell with Gail and Dan Bridger securing third place.

Next week marks the beginning of Salcombe Town Regatta followed by the Yacht Club Regatta and these two weeks constitute the busiest period of the year with sailing dinghies, yachts, ribs, paddleboards and elegant launches manoeuvring to avoid each other and  of course the South Sands Ferry.