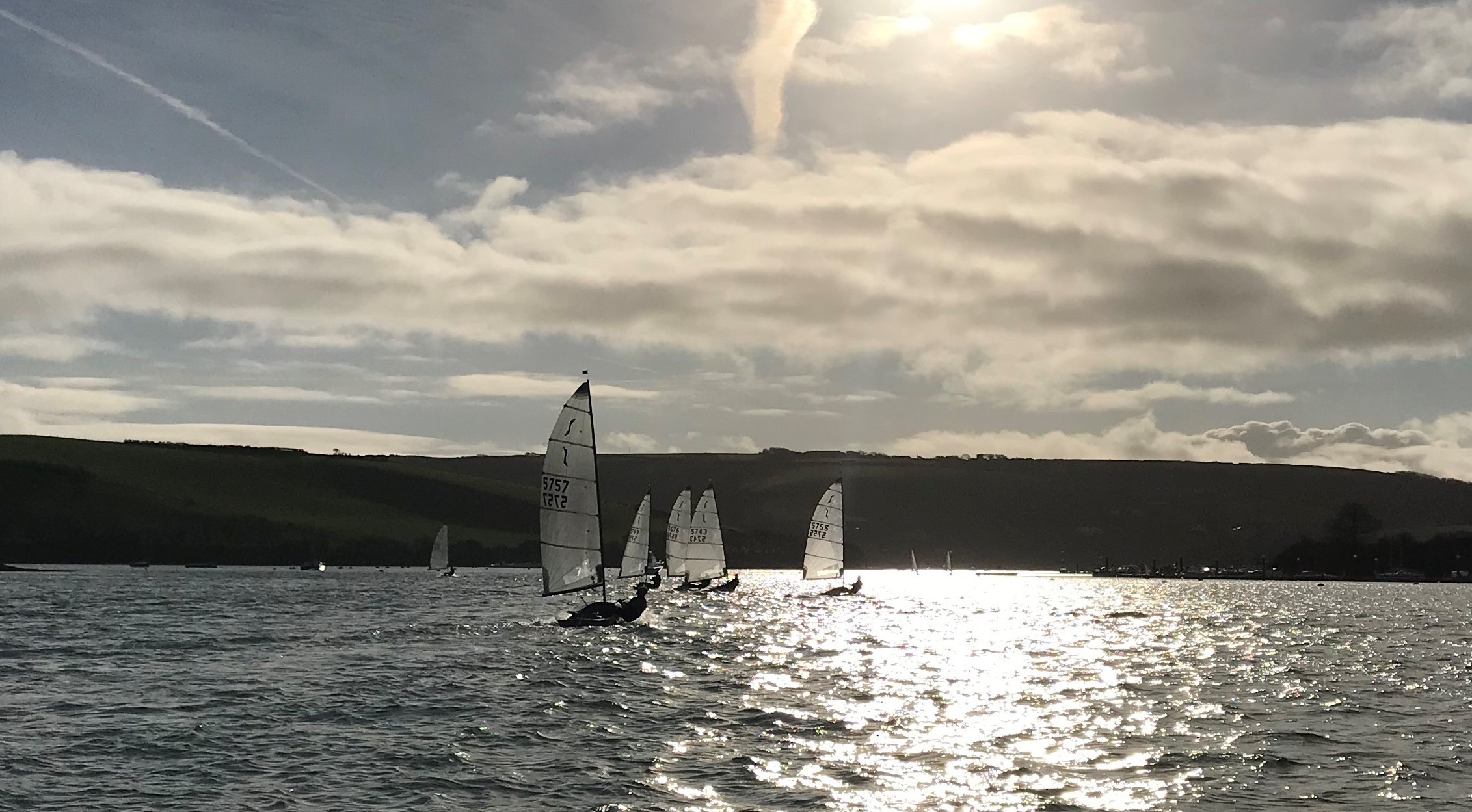 Such being the way of things, the debate before departing the slipway at Batson for a promising race on Saturday morning, centred upon the etymology of the adjective: eponymous. This arose out of an earlier reference by Greening, to the most excellent appellative track, by Pink Floyd: Wish you were here.  For some reason.

This seeded the notion among us pedants, that the ensuing race report should thus deploy track titles within the narrative from perhaps the finest progressive band to arise from the 1970s. It might also serve as a timely reminder to us all, that the seventh decade of the last century was in fact not all bad; for not only that, but British Leyland tooling is rumoured to be dusted down in advance of early reprisal of the Austin Allegro.

However, we will broadly resist this temptation because otherwise, the report will resonate only with those born a while ago which to be fair, many dinghy sailors seem to have been; more is the pity.

Happily, most people, including the race officer, got the memo about the late breaking change in start time from 13:00 to 11:00. There was a decent turn out to convene in the Town area of the Ria. We had nice sunshine, unobscured by clouds, an essentially Westerly hiking breeze, (but presenting itself in the modern idiom, as a non-binary Southerly) and a neap tide in brisk flood, nearing its maximum rate.

The first choice confronting the first off Solo fleet was: which side against the tidal stream to start? A massive right-hand shift just before the off, suggested strongly: Town. The trade-off being: less wind. But Savell and a handful of others opted to go for the Portlemouth shore which rather coloured the rest of the race, since it was definitely the way to go.

There followed a long leg back to Blackstone via a waypoint at Saltsone. Only once in the Town area did the leg become a beat, where Savell maintained his lead, in what was to become a tour de force.

Towards the top of the beat, the fleet had however compressed rather, leading to a certain amount of risk taking by inter alia, your correspondent who sought to avoid the tide at Biddle Head while in the leading pack.

Regular readers of this column, even if they have never sailed at Salcombe, will know of Biddle Head. Biddle is a verb in the local lexicon, because it is a notorious tidal gateway where many a race is won or, in this case, lost. Your correspondent has been flirting with disaster here for years. To randomly extemporise Rob Brydon: "If you've got an electric wheel chair, and a cliff-top bungalow, you're asking for trouble". And to be fair, this is what I got.

Hitting Biddle is one thing, but the departure of the rudder from one's transom as a result, quite another. This has been in the offing for decades. It should have given one plenty of time to contemplate what one would do, in this sub-optimal scenario. Few options presented themselves. In the event, it was possible to strike up nonchalant conversation with passing dog-walkers.  It seemed reasonable to advance to them, that desperately clinging to components of a Solo dinghy with waves crashing about ones ears was in the natural order of things. Certainly, the arrival of a safety boat was welcome. News had reached them that Cranford Smith had finally had his come-uppance, via word of mouth down the fleet, apparently.

Meantime Savell and the rest of the fleet sailed serenely to the finish. Commodore Savell aced an excellent win from Simon Dobson, hotly pursued by Tim Law, who made a welcome return, despite illness.

Over in the handicap fleet, matters were a great deal more responsible. Cadet George Alexander, records the following:

"A strong tide and shifty conditions saw the majority of the handicap fleet start on the town side, where during the upwind legs margins were made and lost depending on the crews' ability to respond to the lifts and headers.

At 1, the Merlin and Phantoms had secured an early lead, over the OK, National and Lark; yet again the Laser radials of Alexander and Groves were neck and neck, with the 4.7s of Meek and Evans bringing up the rear. A run and high reach saw the fleet to 7, and then back into the harbour with a 1-3-finish loop to end. After a prior school boy error, [Merciless, but true. Ed.] Morley had caught up to take line honours, with the Merlin in close pursuit. The Lark and National finished just two seconds apart, with the OK about one minute later. After another close race, Groves crossed the channel on a lifting tack in the final stages to take the lead over George Alexander.

One should add, that after the division bell, Roger Tushingham in his brand new OK, won out, despite a capsize en-route down-wind. Andrew Groves, was a very creditable second ahead, of Will and Mandy Henderson with their in-period Lark sporting a 1970s kite.

3rd. Will and Mandy Henderson. Lark. 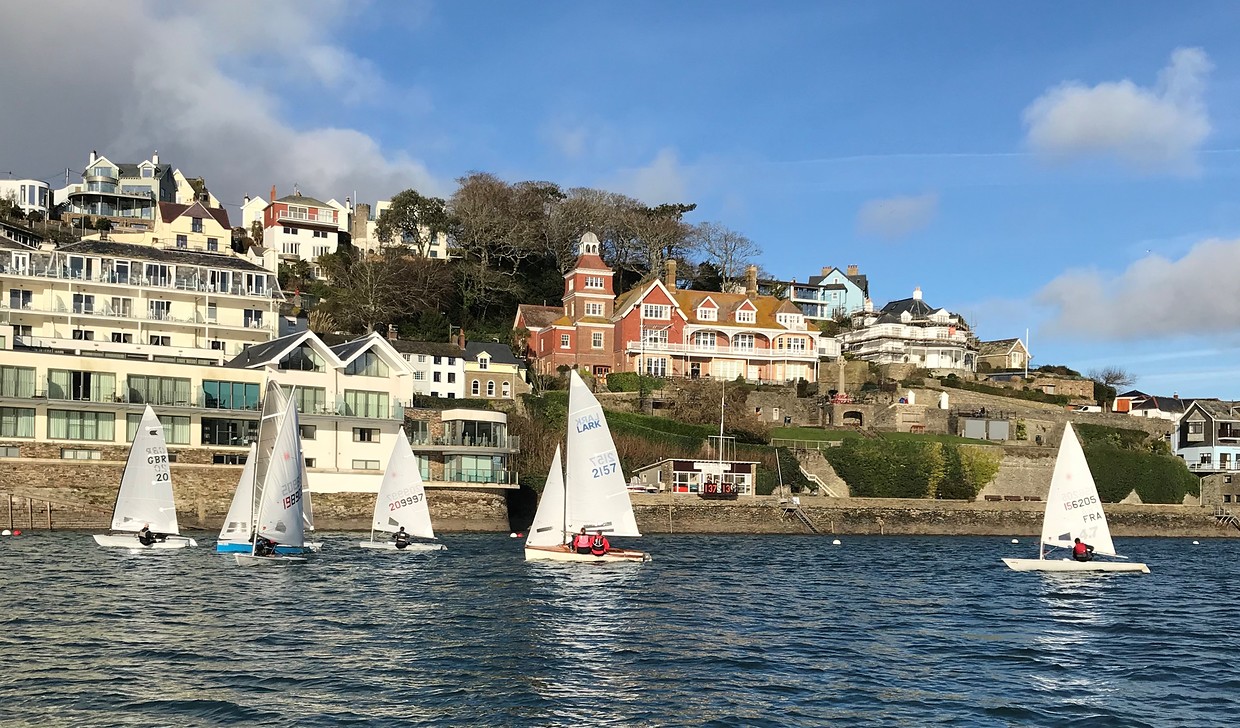 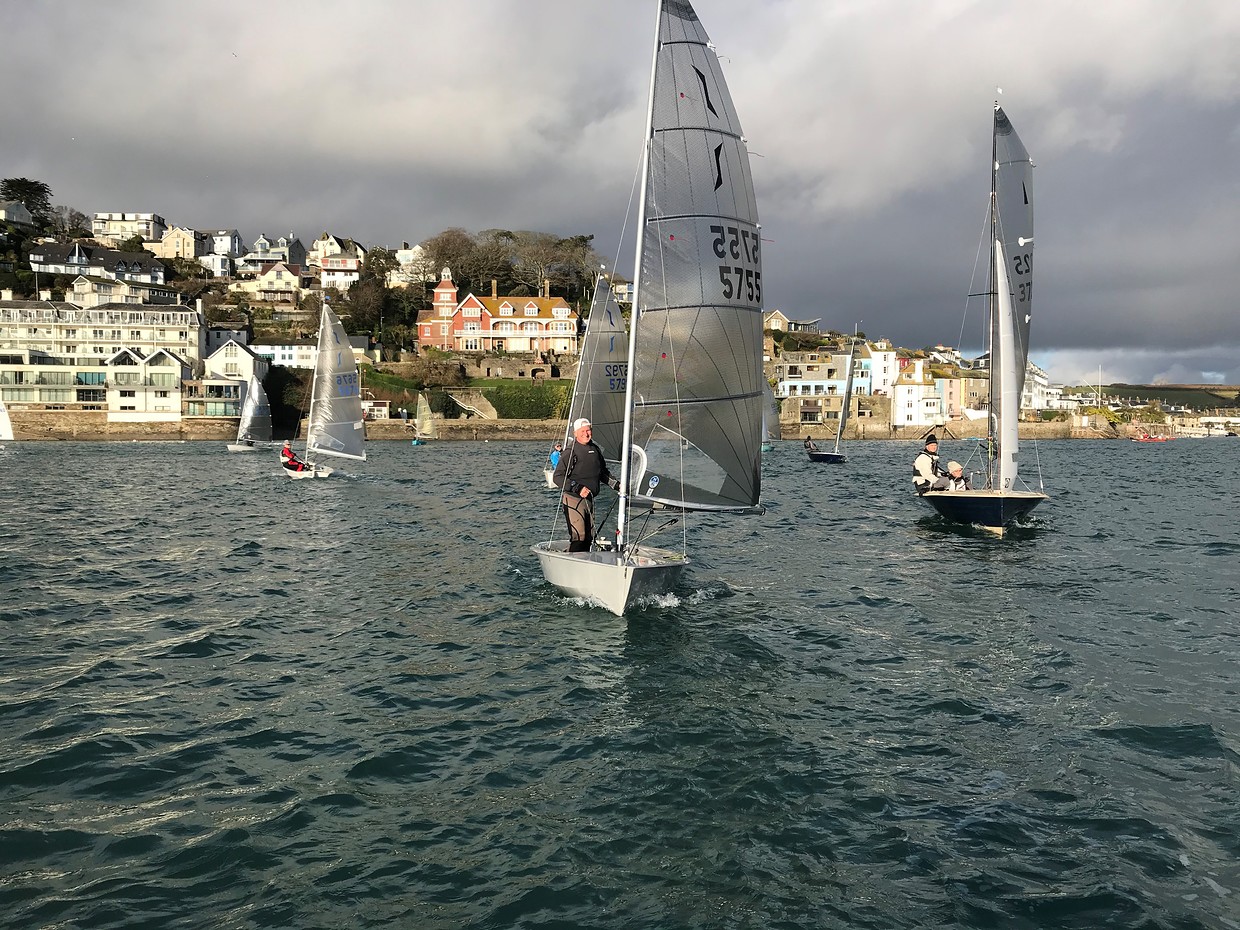 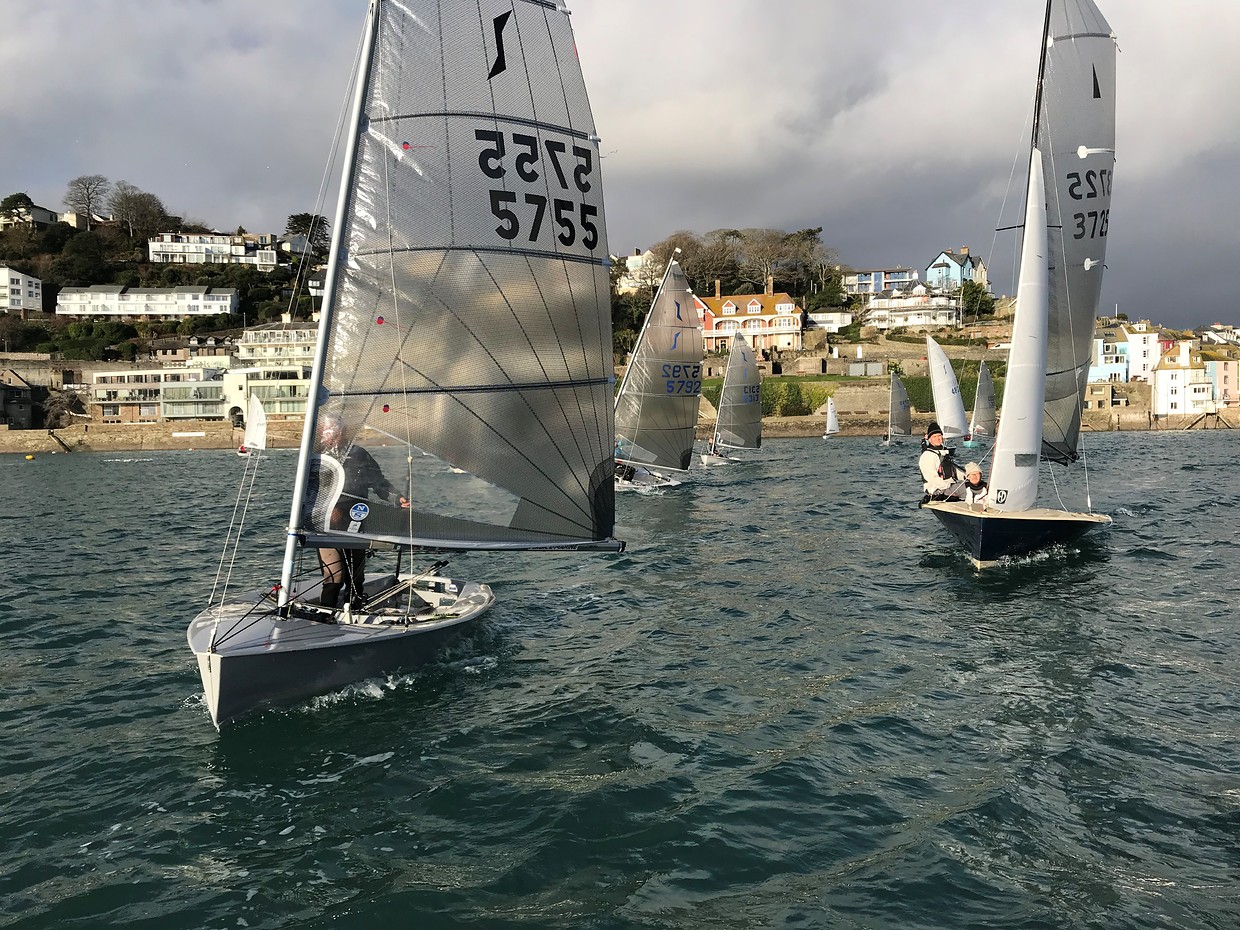 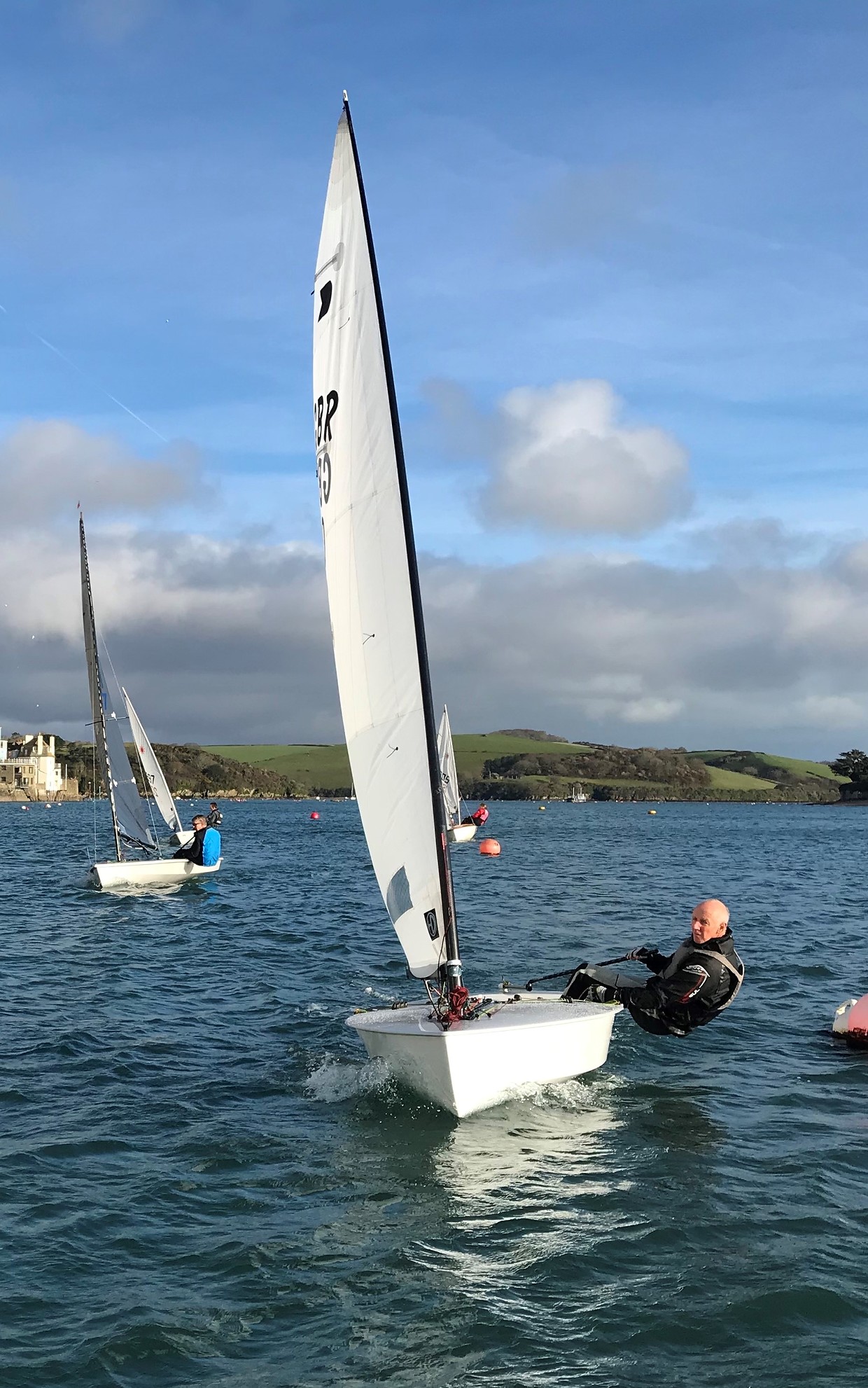 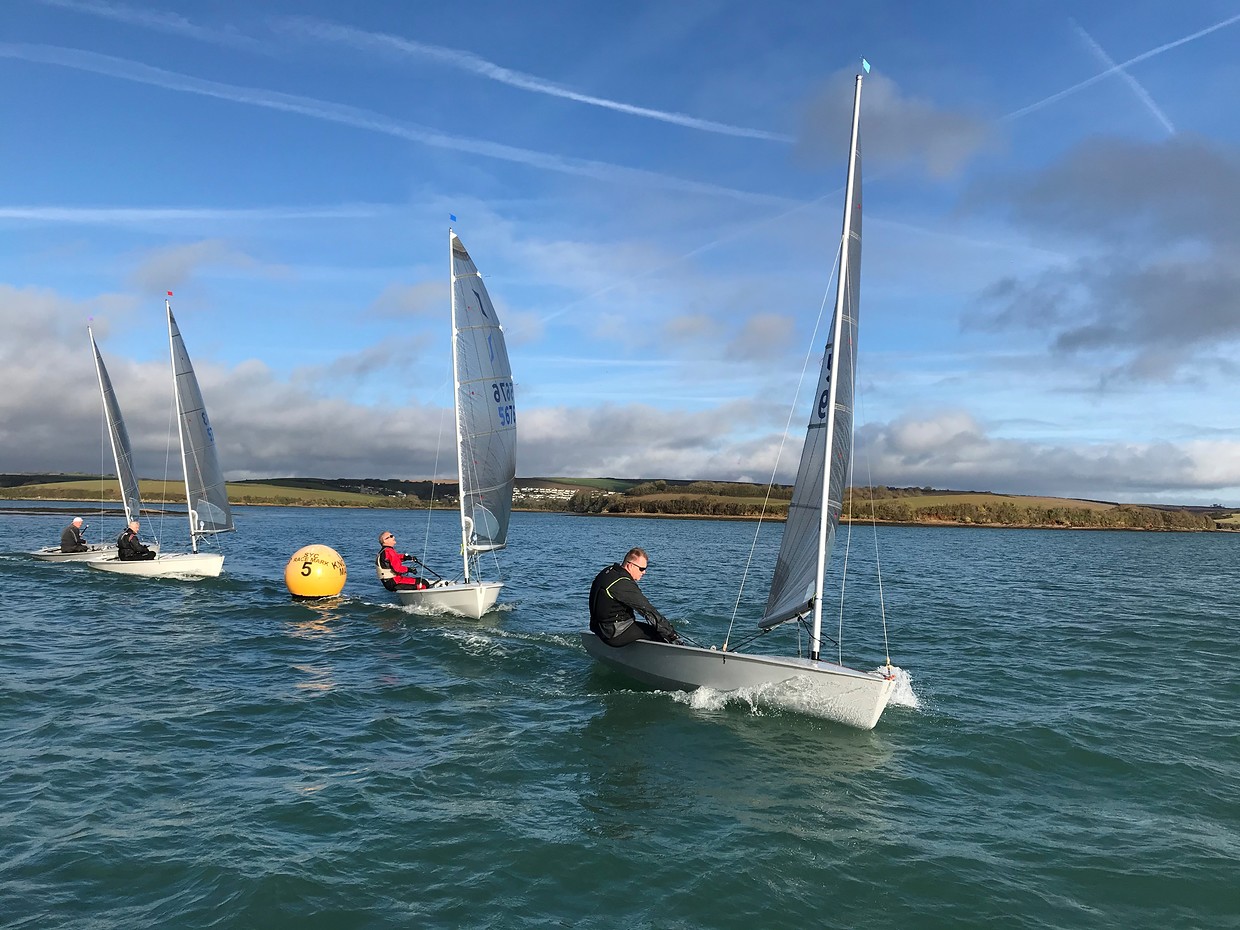 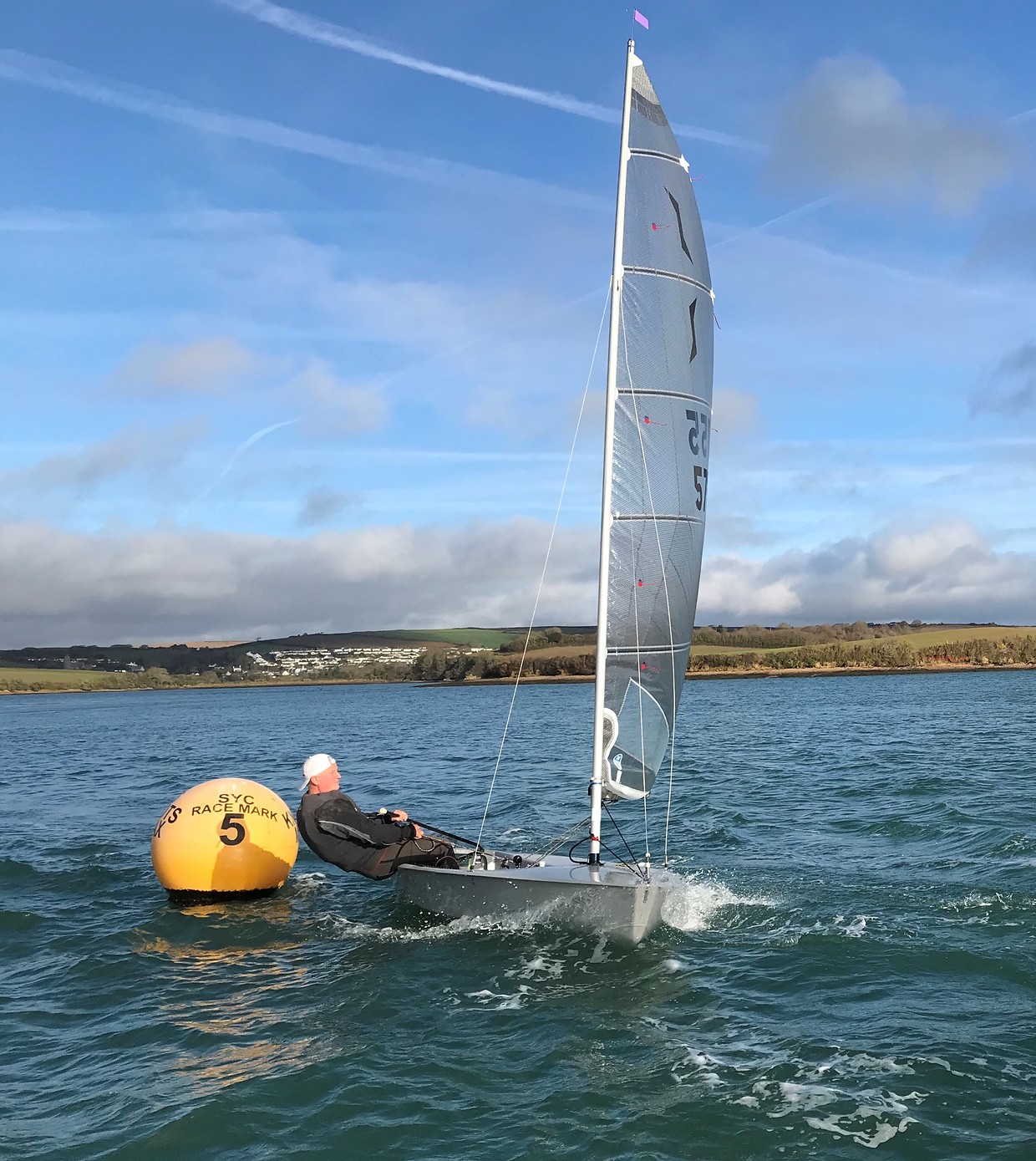 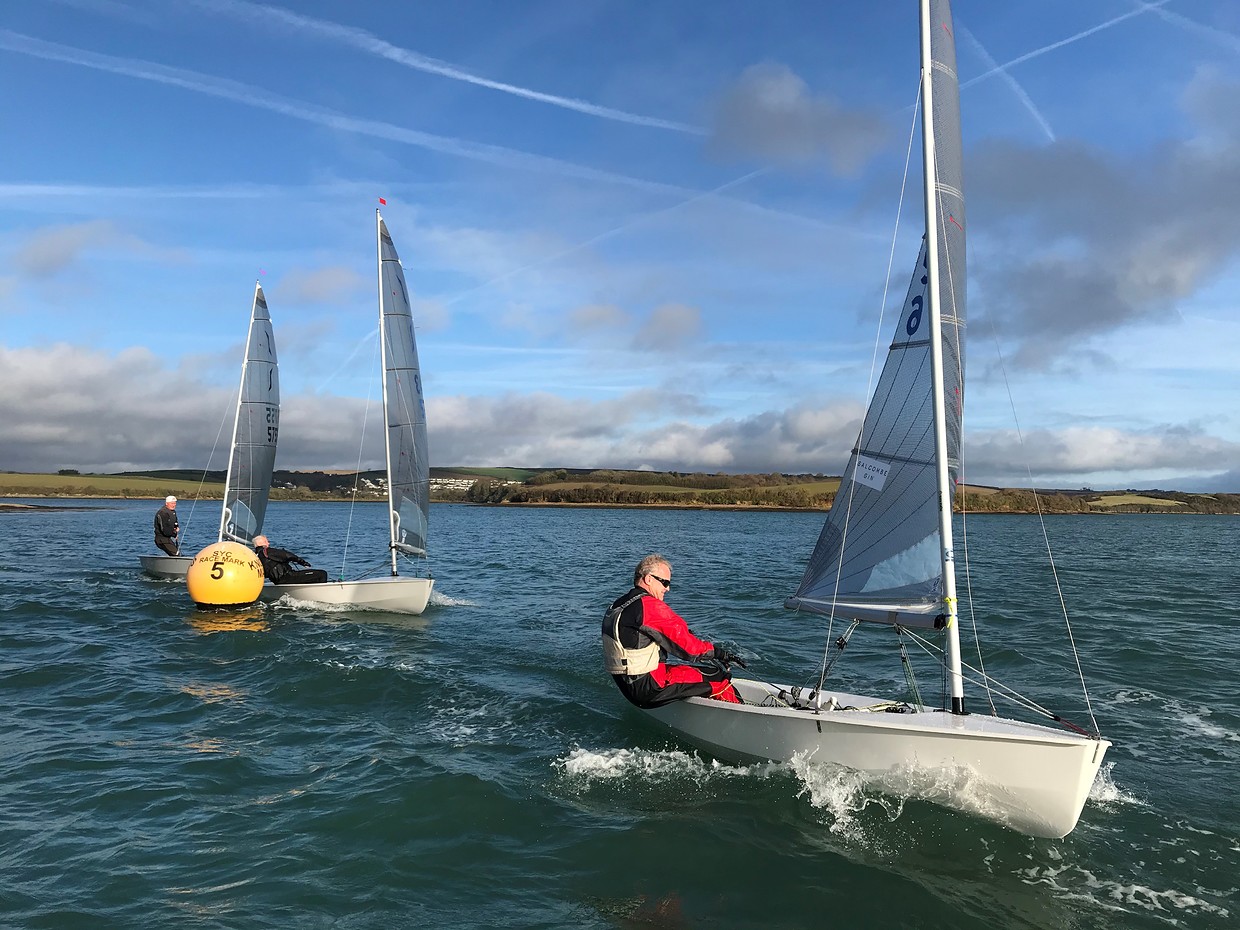 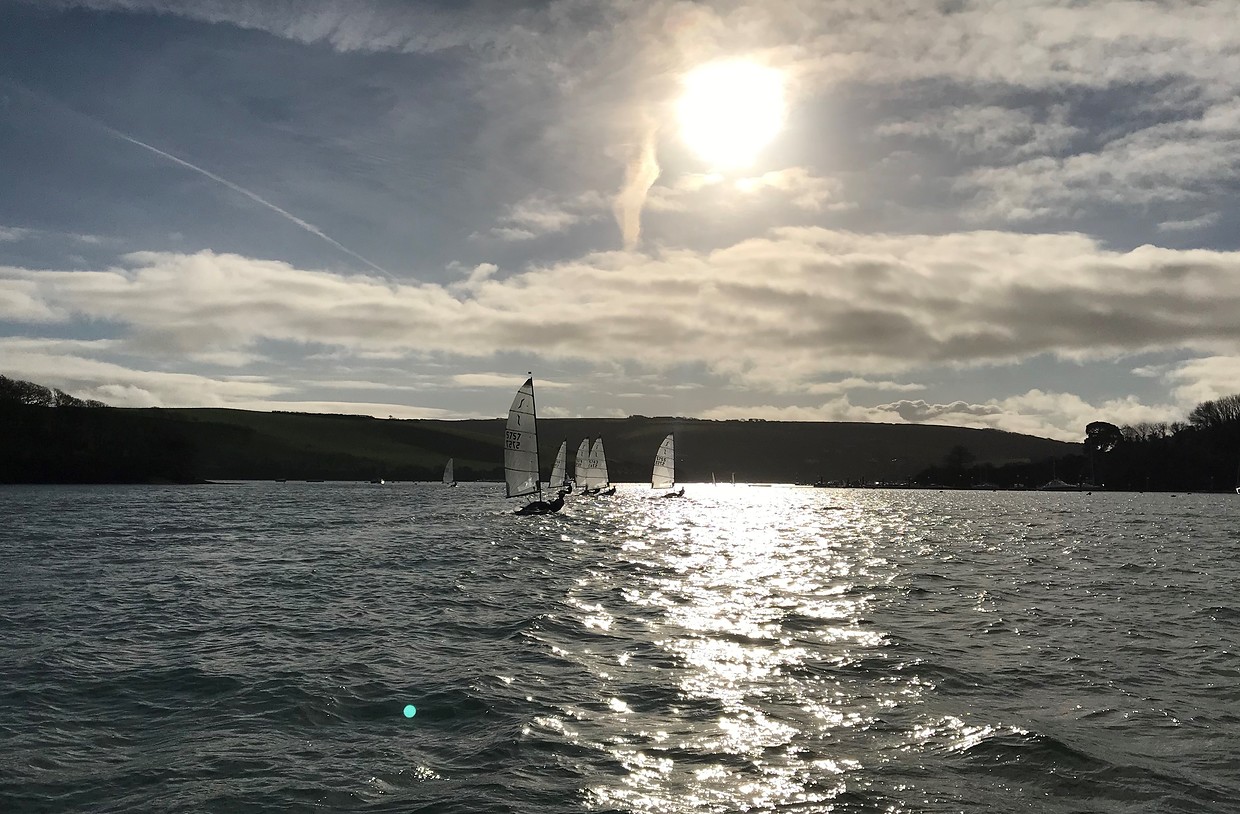 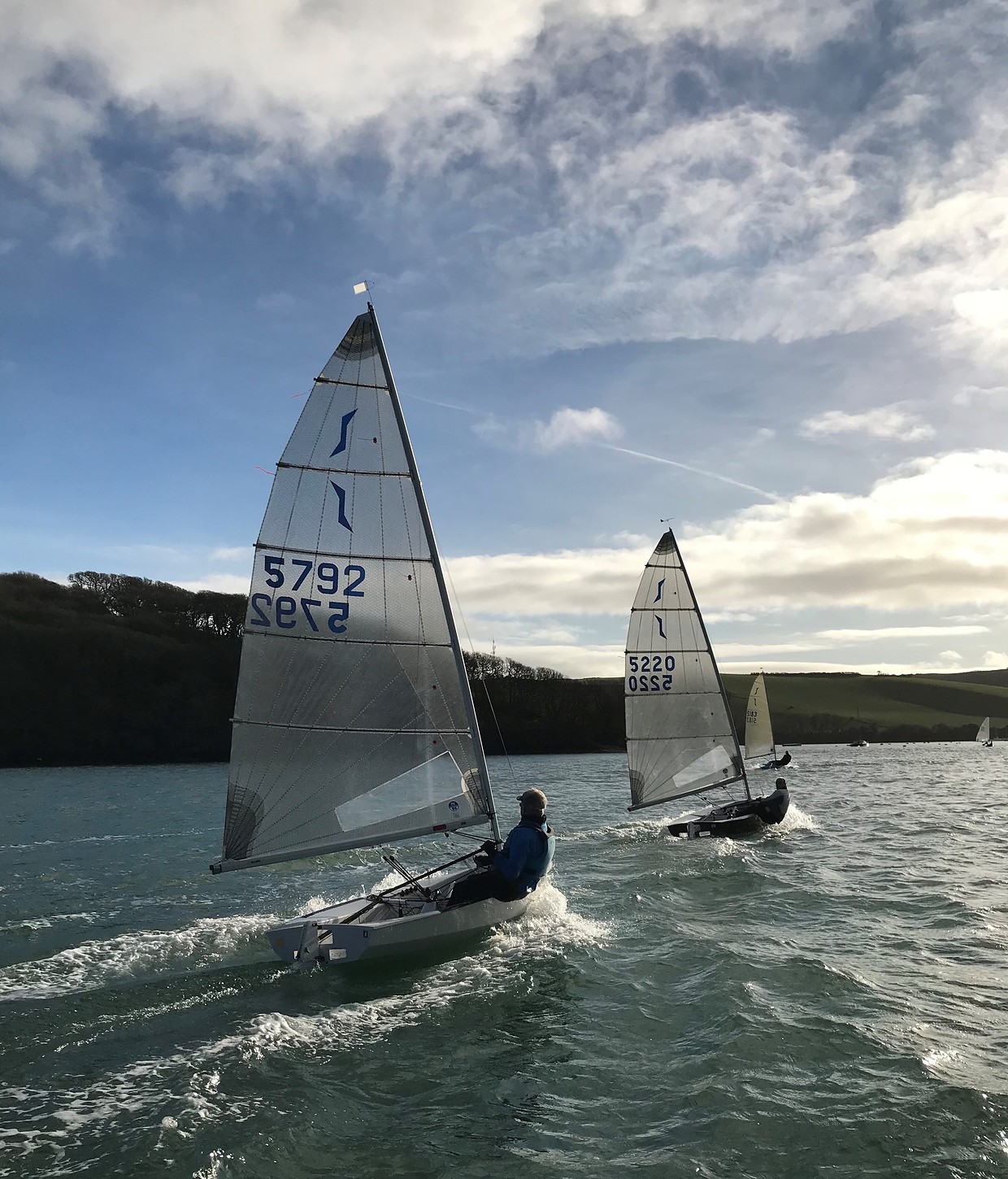 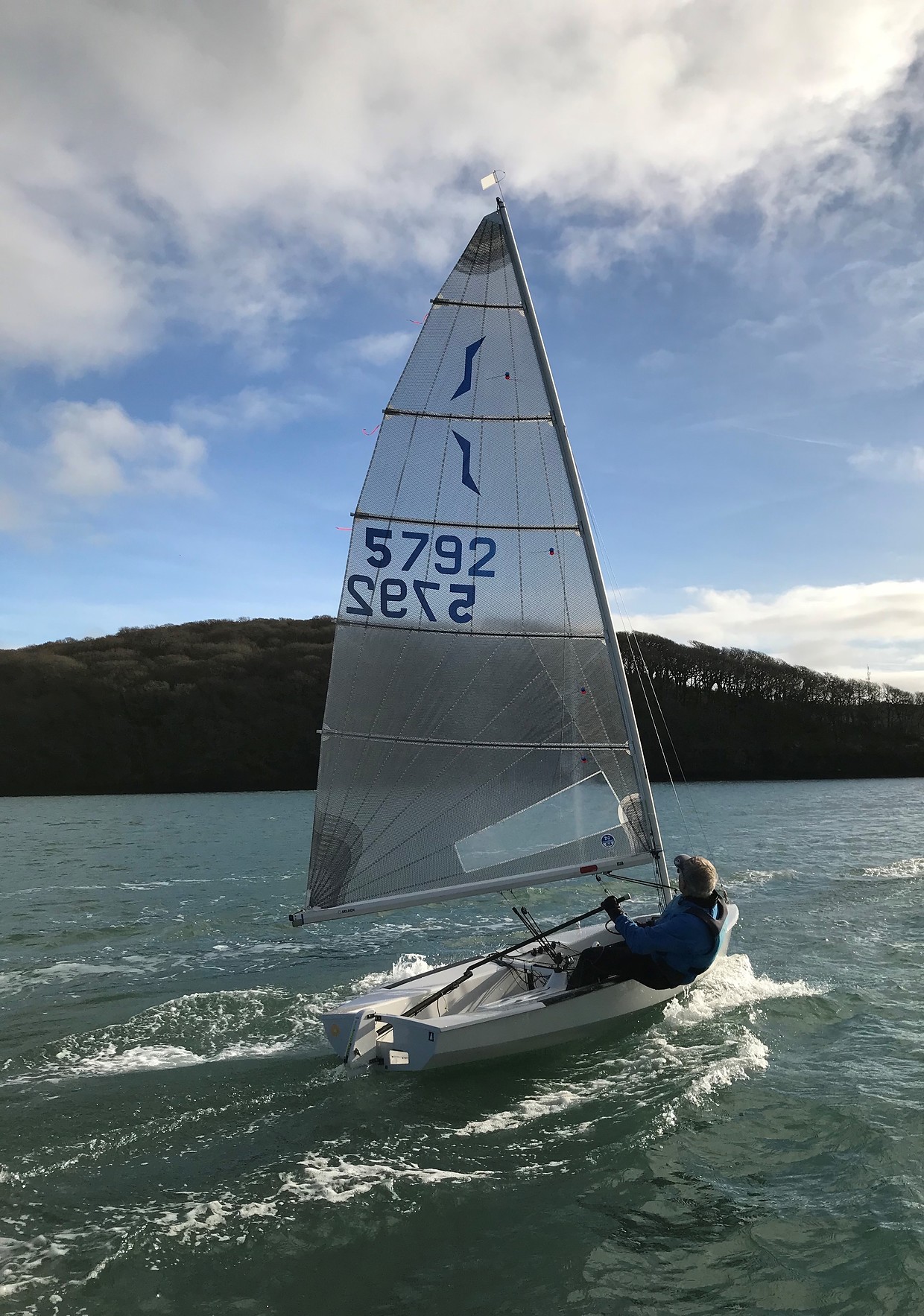 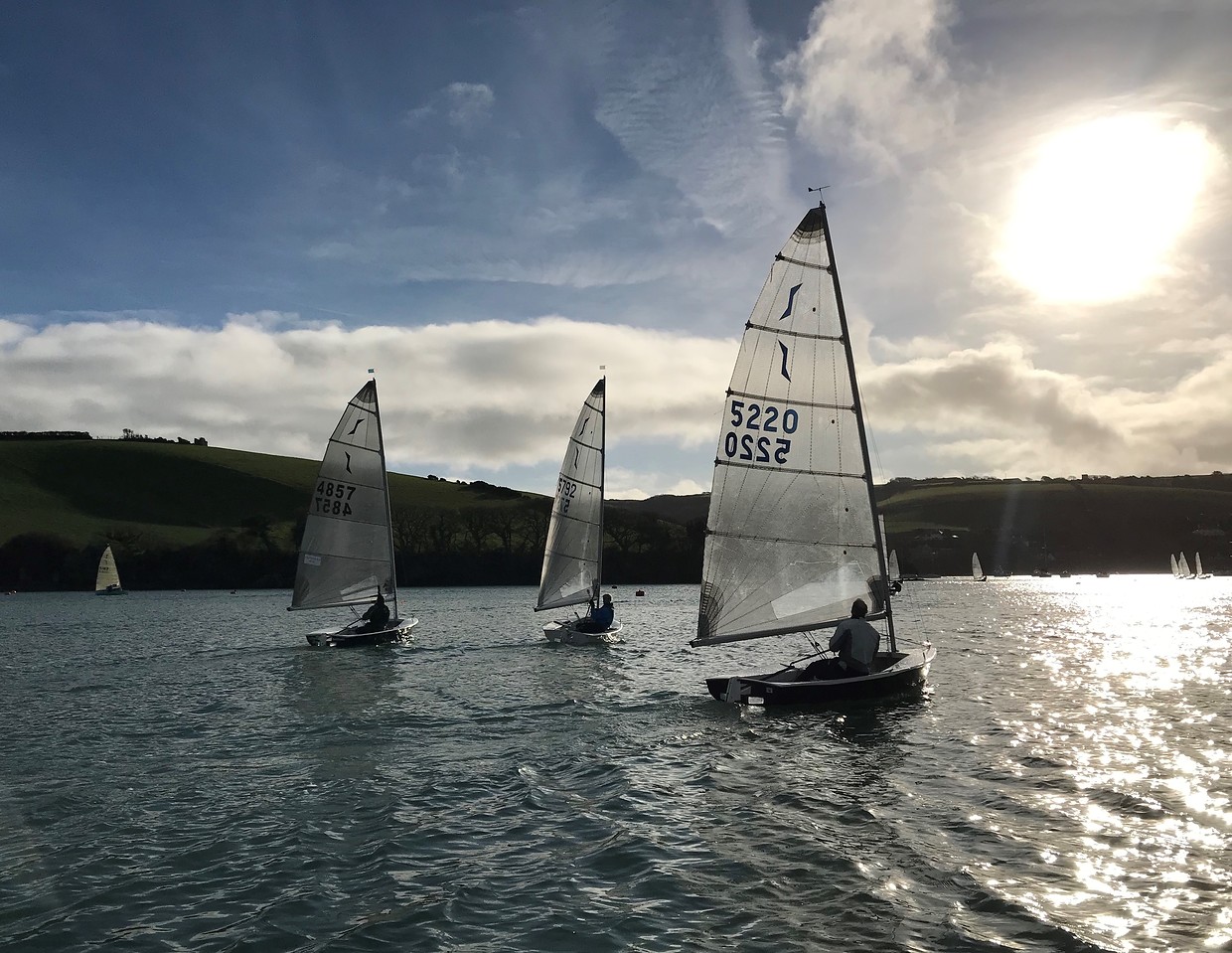 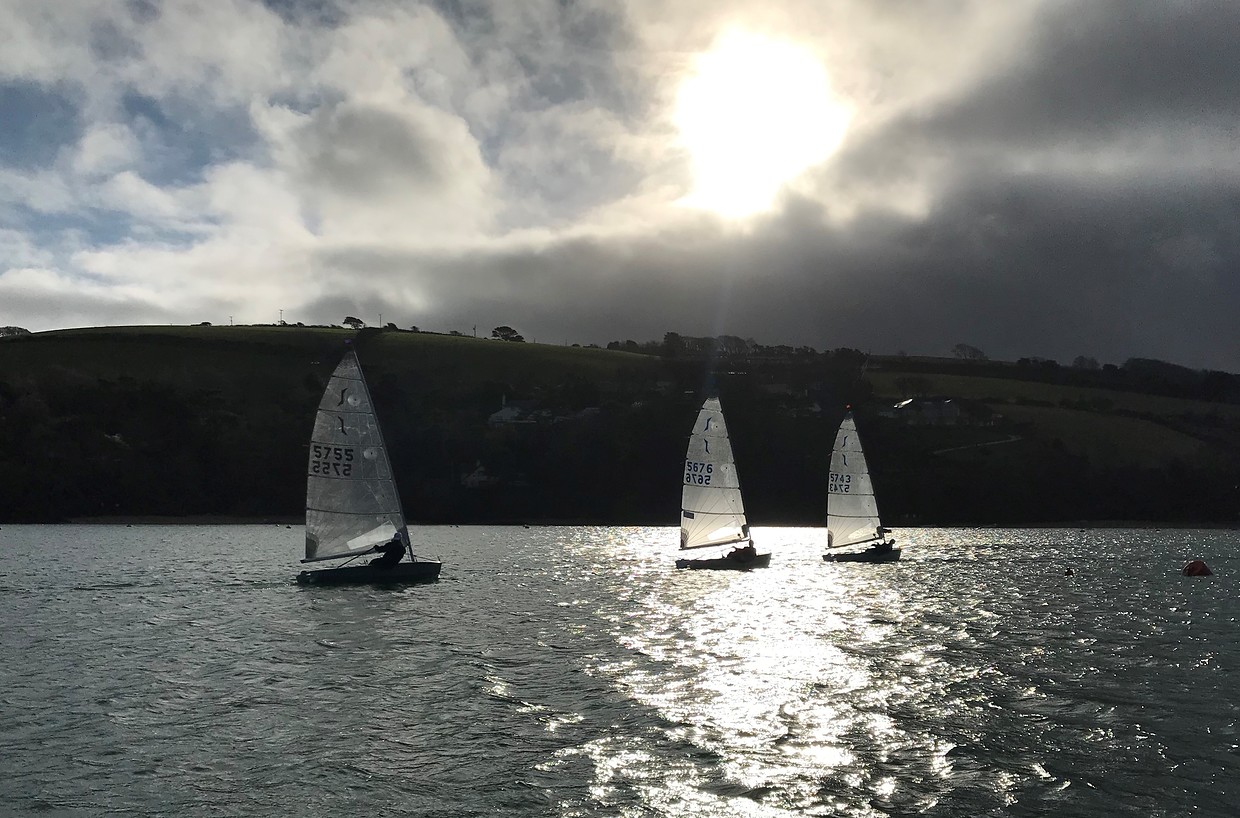 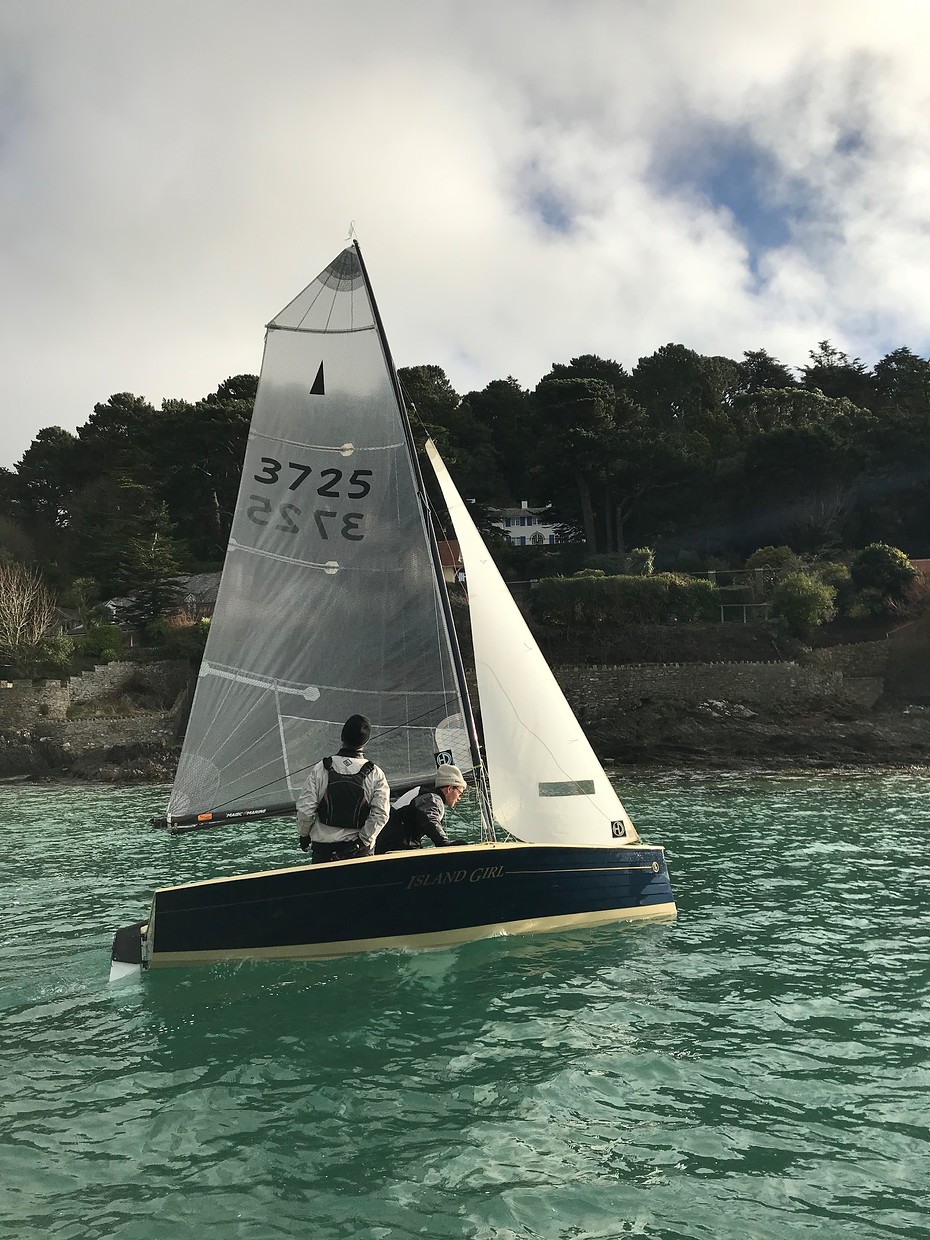 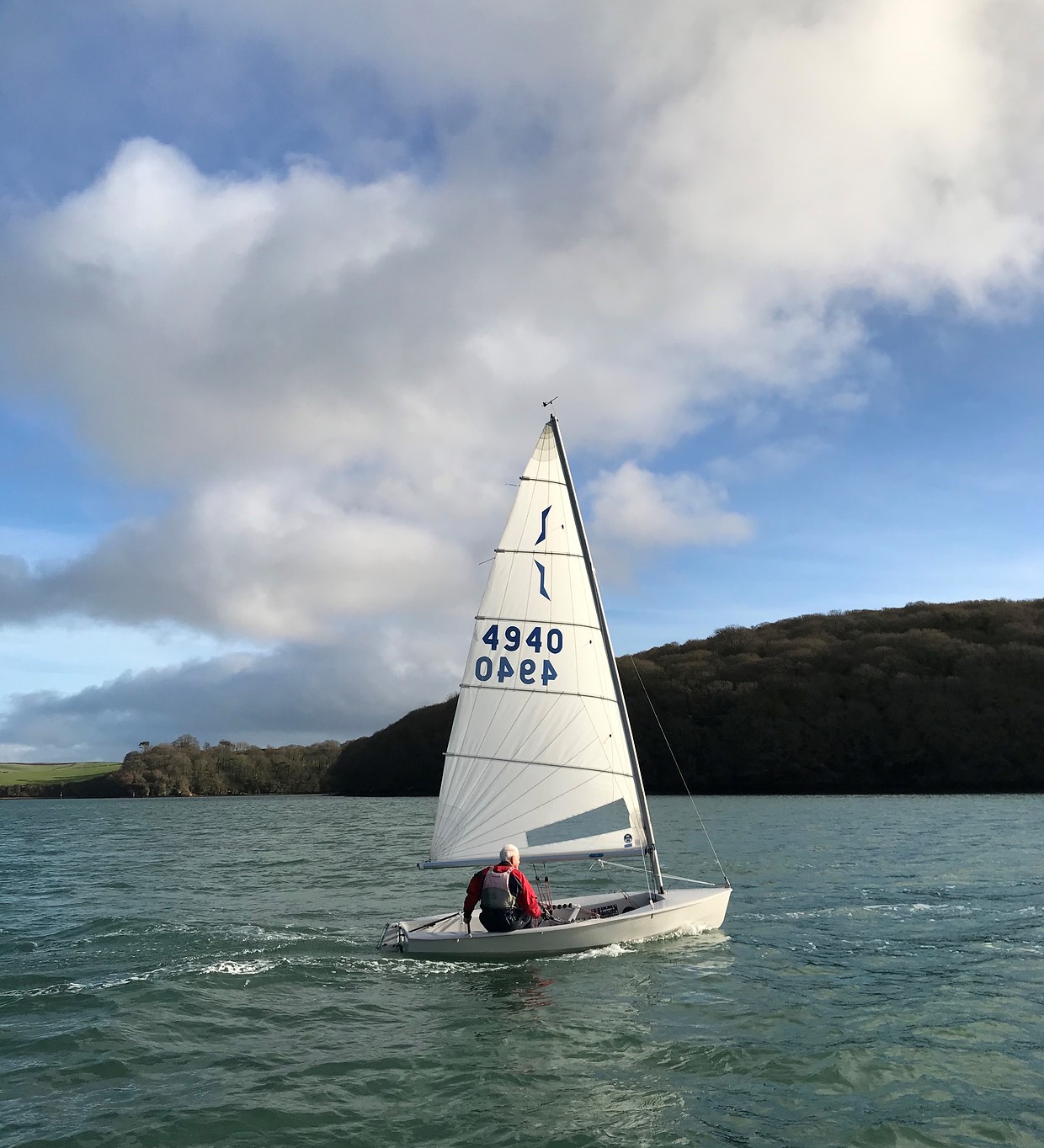 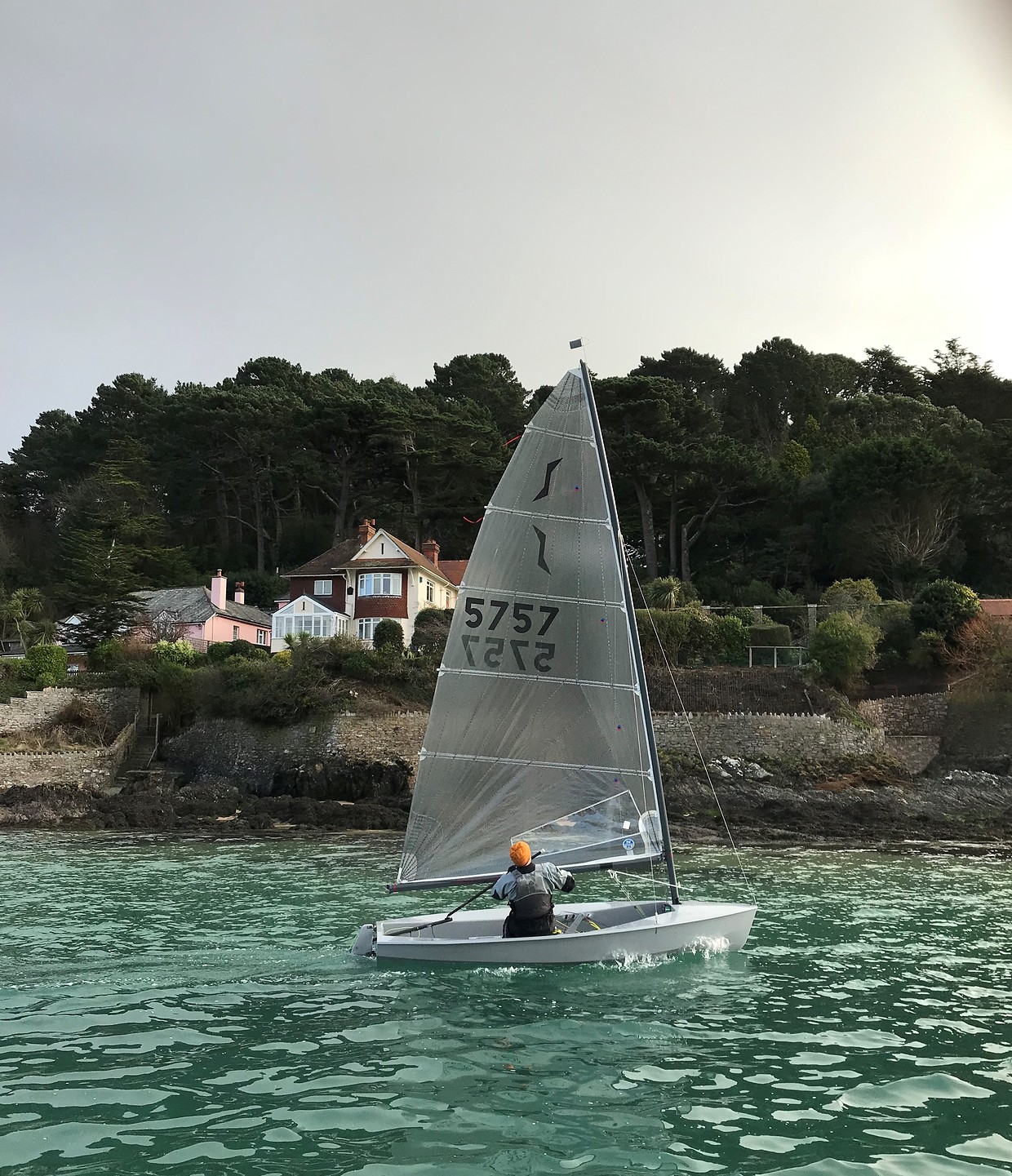