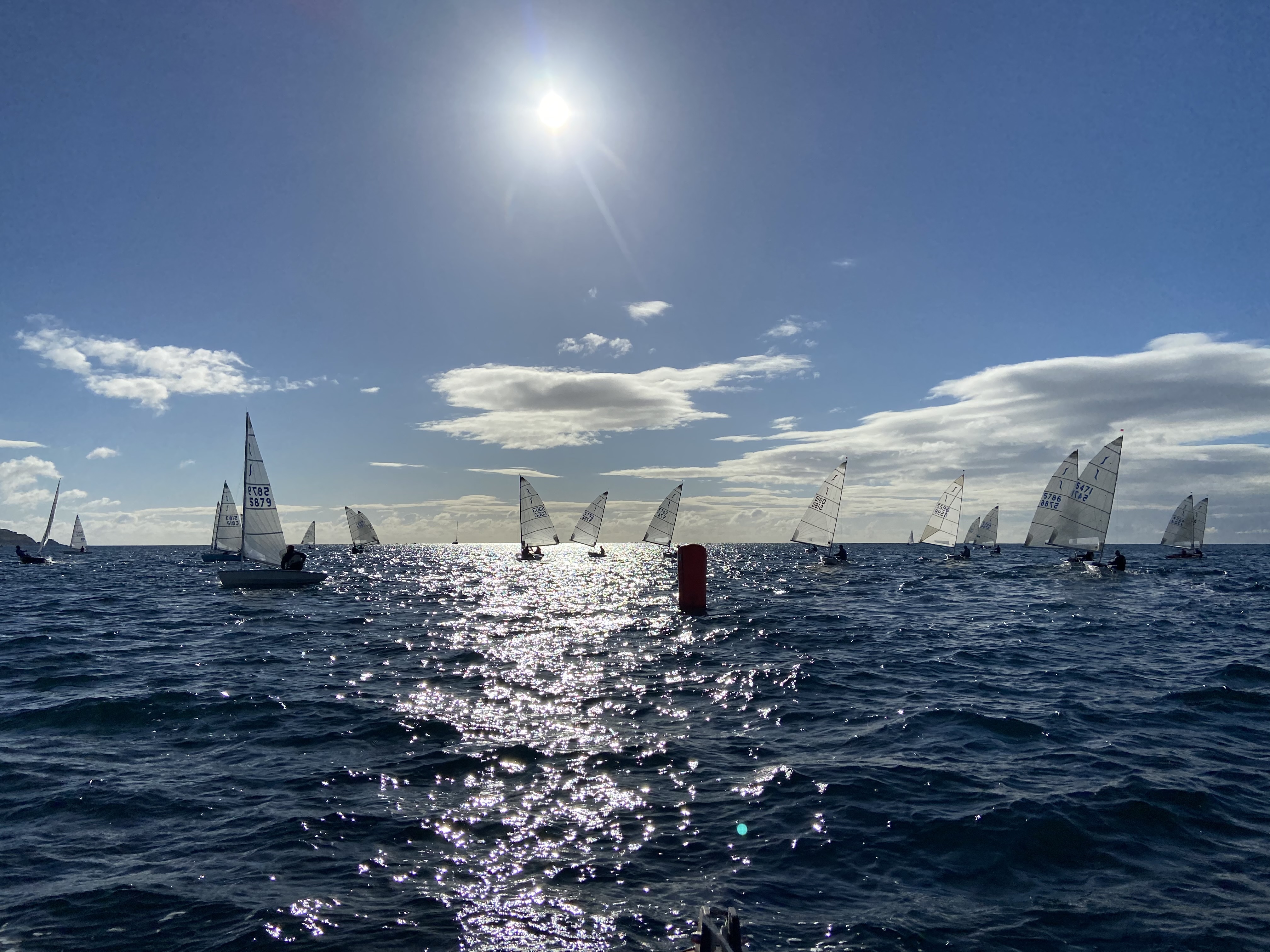 Breaking with convention this report will thank first everyone, if not by name, by sentiment, involved in the excellent organisation of the National Solo, Western Area Championship held at Salcombe Yacht Club over the weekend of 10th and 11th October 2020.

From a race team perspective the conditions were challenging both at the start and finish of races, on each day. We were blessed with a brisk if not refreshing, airstream centred on a high pressure which produced a 11-18 knot North Westerly breeze.  This contained some sizeable shifts, gusts and lulls. Many have prostrated themselves at the altar of such a breeze in Salcombe. It is notoriously tricky both to set a course and otherwise race in it. Praying does not seem to help.

In any case, sincere thanks to Martin Payne and his excellent race team for laying on such a fantastic event. Martin has his roots, indeed is a multiple champion, in the Solo class. He might otherwise have been detained as PRO for an international Dragon event, but for the global reaction to Covid. It is an ill wind that blows no-one any good and we got him instead. We are extremely grateful to Martin for running our event. He was ably assisted by Ian and Wendy Stewart and a plethora of safety boat teams. It was brisk work in a Solo, but it must have been bordering freezing on a safety/committee boat.

We are also grateful to Ossie and Karen Stewart for the loan of "Island Girl", as committee boat on Sunday, when we raced in the range. It is possible that this is the first they have heard of their generosity, but grateful thanks to them all the same. A very classy committee boat indeed.

As ever, we are also indebted to SYC Solo Class Captain of decades' standing: Adrian Griffin. His liaison with the NSCA, particularly SW rep John Steels, was impeccable. There are many others behind the scenes who helped.  Thank you.

The event itself attracted thirty-three sailing entrants including some big names from the loft of North and Impact Marine. Thank you to all who supported us.

Records show that not since 1934, has an SYC race been started other than from the commodious and centrally heated surroundings of the race hut with all mod cons. Martin however pronounced that such a start would be a lottery, and he would have been quite right. Instead lo, Race 1, we started down at South Pool from an actual committee boat. This with a brisk beat to mark 3 off Bungalow Point, rinse repeat, then off to Gerston, Crossways, Gerston, return to the club line for a final washing machine finish. Great course.

Some made light of the challenging conditions, particularly Ian Dobson, who by dint of considerable physical effort was able to prevail over the equally super fit Tom Gillard and local hero returning to the class, Paul Ellis whose inherent weight and innate talent was put to good effect.

In truth the locals were a bit light headed by a break with start line tradition. So after a short interlude, normal club start line service was resumed. By now, the fleet was confronted with an ebbing tide with the first mark at Gerston, twice lapping to Mark 3 at Bungalow Point. At the gun the adverse tide split the fleet into two, with those on the Portlemouth shore finally winning out against those starting on the Town Side.

Thereafter we were treated to a robust beat to Gerston where here again, it paid to be fit. Or heavy. Chubby Cleaves falls firmly into the latter bracket and aced the first mark in front of Gillard, no mean feat. This is more a tribute to Chubby's carefully curated diet than deprecation of Gillard. But off-wind, Gillard simply planed into the lead leaving Paul Ellis and Cleaves to pick up the podium places.

Ian Dobson, a much lighter helm and who features later in the report admitted he lacked the horsepower to cope with two races in such unstable conditions. In relative terms, he blew up, posting a lowly, later to be discarded, seventh.

The finish of this race was a challenge. It entailed returning to the club line in the sub-optimal classic Salcombe random madness. The fleet arrived back in clumps of fifteen boats or so, mostly on the run with obscured sail numbers.  The race team did an excellent job, capturing the positions, operating as they were, with limited person power.

Conditions on Sunday were a lot less brutal and in any case we all went out to the range to race. Simple windward leeward course. Start: off Gara Rock. Strong Westerly component to the breeze but also quite unstable. Some shifts were so large it was possible even for your correspondent to spot them. Invariably far too late, of course.

Ian Dobson, made the best of the race and established a decent lead over the increasingly consistent Paul Ellis. In any case, Gillard posted a discarding fourth, giving witness to the large shifts on offer. Tom Lonsdale, North Sails, emerged from the mix and made up the final podium.

Race 4, the wind had swung right, though most of the fleet your correspondent included, had decided the pin was the place to be, confronted with the mirage of a left shift. The shift if it even existed, endured just long enough for much of the fleet to be buried in limited pressure. Meantime Gillard largely alone at the committee boat had picked up a massive right-hand shift and was pointing directly at the windward mark in new pressure.

Ian Dobson cannot have been far away from that shift either but the lead established by Gillard at the end of the first beat, was unassailable. Gillard might have been able to cruise home by covering the fleet. This is just not his style; the dynamics and his energy on all points of sailing to the end were impressive to witness, even from your correspondent's remote vantage point.

Third: Locally based Paul Ellis. Of note: Paul is sailing a Solo until recently owned by one Malcolm Bell. Bell did not ever trouble the trophy engravers but always insisted there was something wrong with this boat. Apparently not. 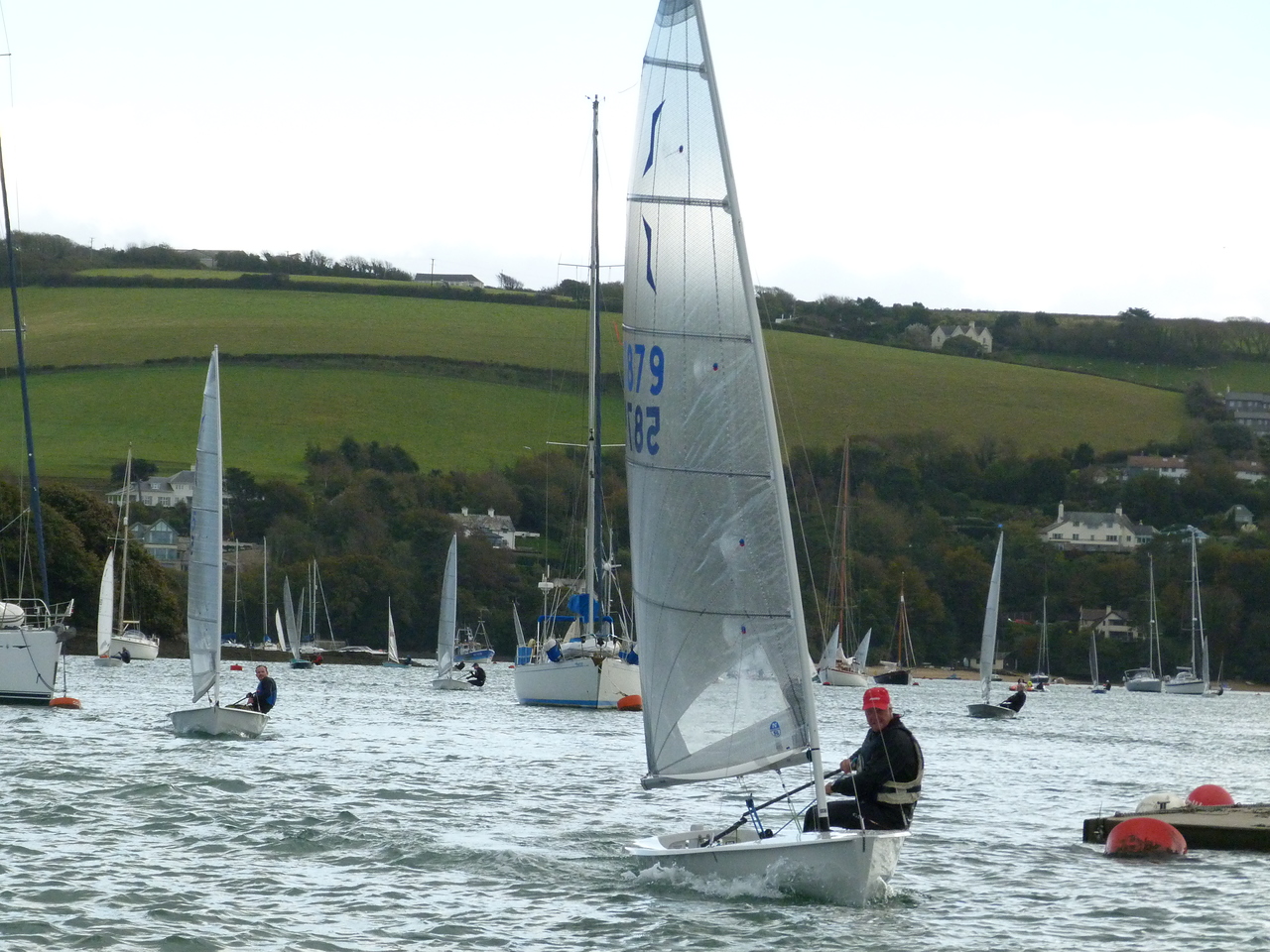 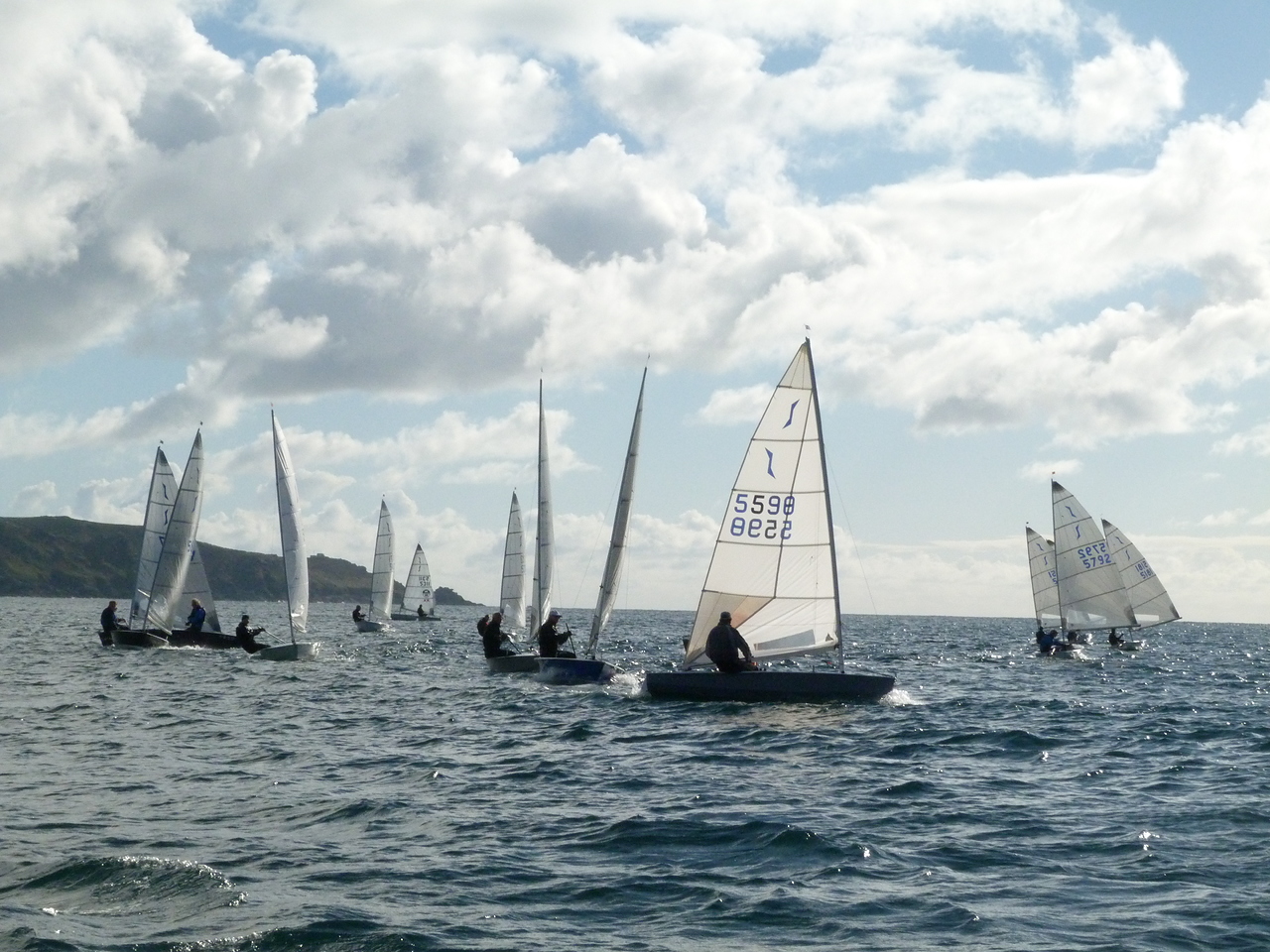 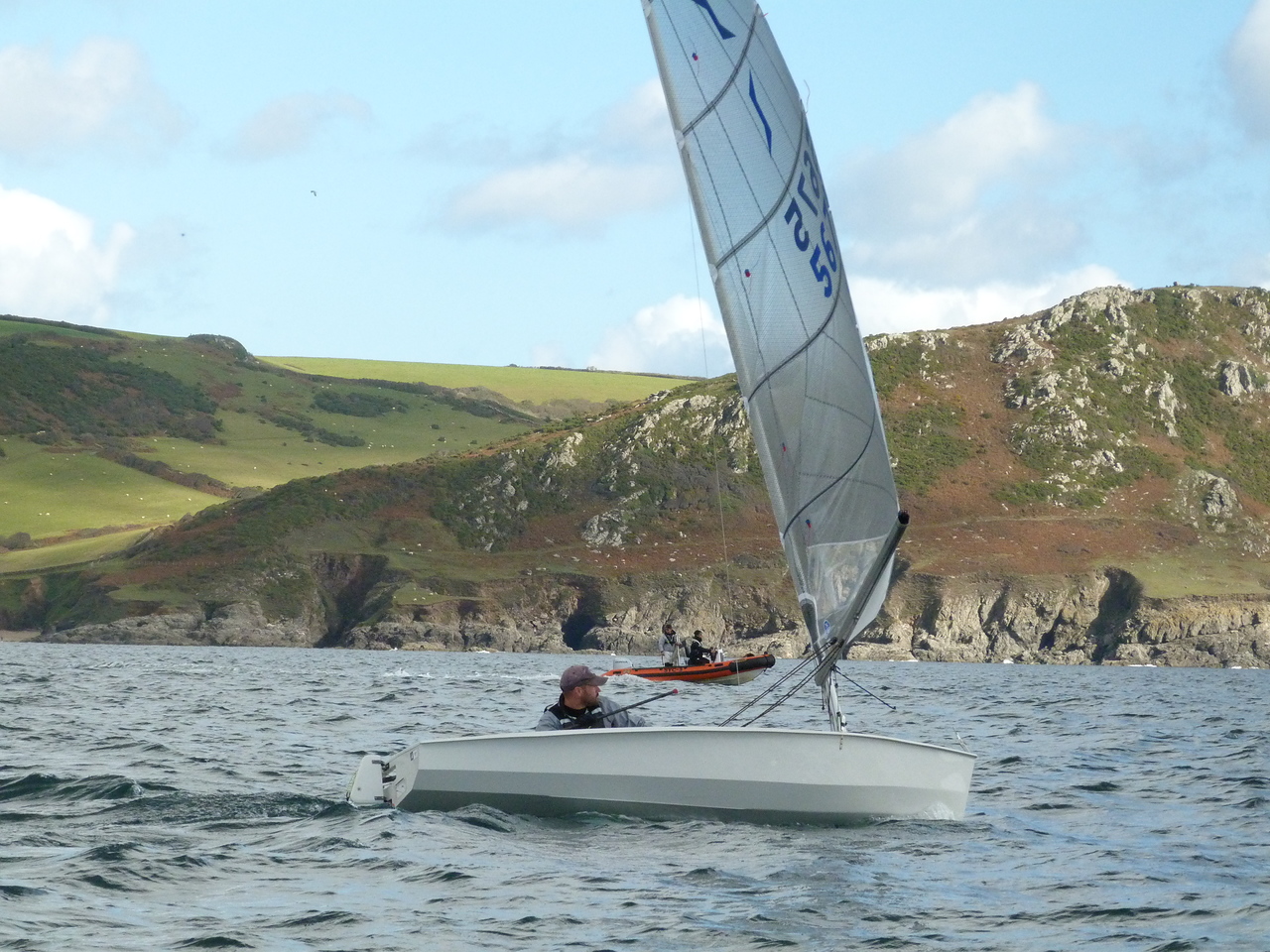