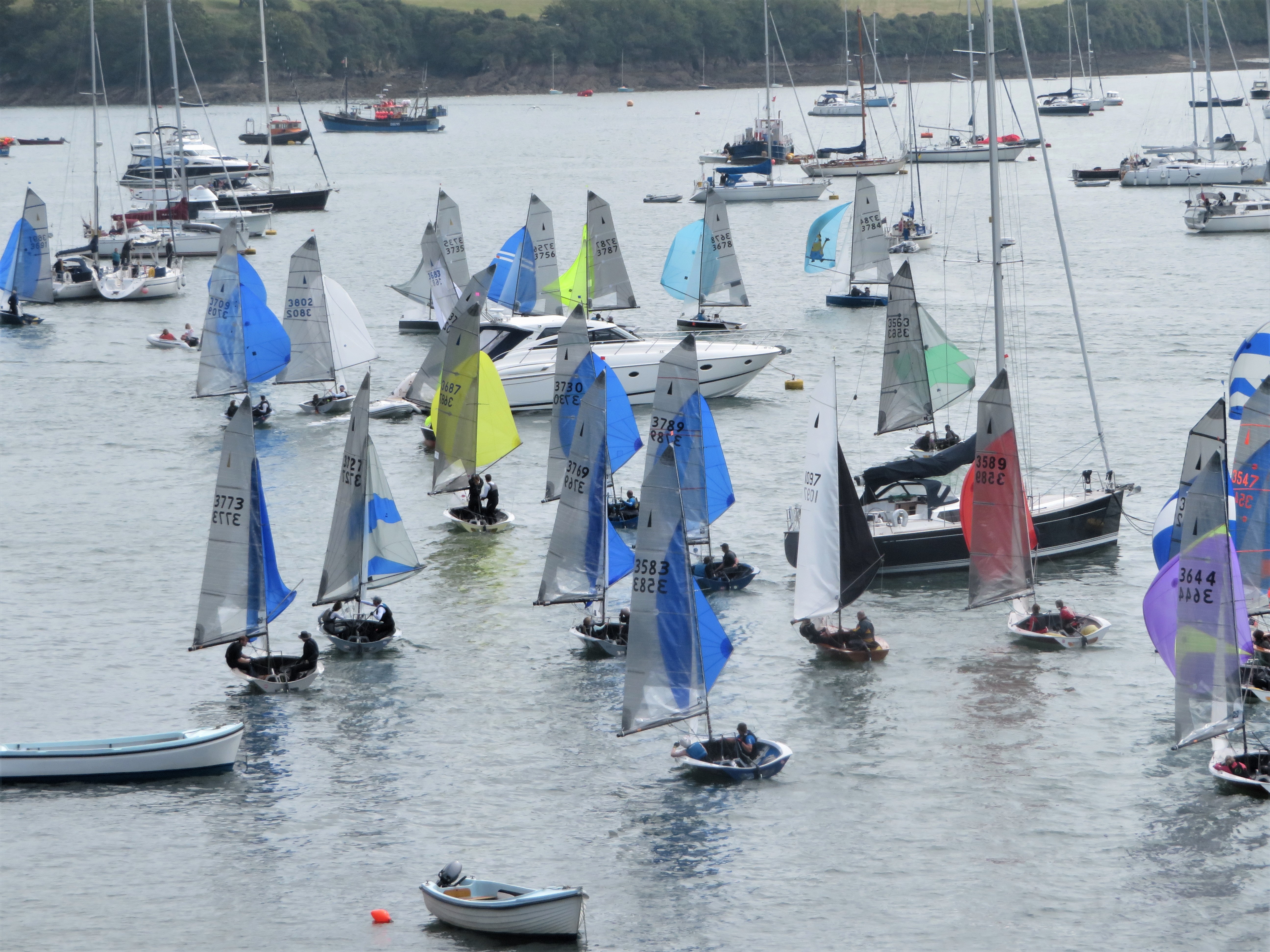 Thursday dawned with a light North-westerly that was struggling to find its way down to the start line.  As if on queue a South-westerly found its way down the harbour to arrive with a minute to go. Anticipating a flat calm start, PRO Scud Stewart set a short first beat to Mill Bay. Mike and Jane Calvert navigated this very well to round first but with most of the fleet close behind them going on to the run it was hard to find clear air.  Those who had not made the best start had the opportunity to gybe away into clear air and made good progress down the town side and move into an early lead.  However, they ran out of breeze at The Ferry and those who continued down Fishermans got new breeze to move back into the lead.  Going well were the Calverts, Matt Biggs and Beka Jones, Ian Dobson and Charlotte Fildes with Tom Gillard and Aaron Holman giving chase.

Following the long patchy run down to Gerston the breeze had built to give full hiking conditions as the leaders came back into the harbour.  Ian and Charlotte had worked out a good lead from the Calverts and Matt and Beka.  Tom and Aaron were on the charge and by the third beat to Mill Bay had moved through into second.

Ian and Charlotte carried on unchallenged to bring the Rockatross home for her first Salcombe win.  Tom and Aaron in second had almost done enough to take the title with a race to spare but needed to see how Christian Birrell and Ali Potts performed in the afternoon race.

Taxi and Pippa clawed their way back into third to put them back in line for a podium position.  The Calverts consolidated their podium position with fourth ahead of Matt and Beka and Antony and Jo Gifford gain a second top six placing.

With the breeze nicely settled in the South-West and with a strong flood tide running the question was whether it was a town or Portlemouth shore start.  There was also a good right hander on the approach to Blackstone but that meant going out into the tide to benefit from it.  The hot money was on the Portlemouth shore with the majority of the top teams lining up there.

Christian Birrell and Ali Potts who needed to win their remaining two races to stop Tom and Aaron taking the title won the start and led up the Portlemouth shore from Peter Ballentine and Rob Allen.  However, it was Julian Parry and John Burn who had stormed up the town side who led around Blackstone.

Christian and Ali played the gusts down the run to take a good lead and were able to extend away over the long beats up the shore and gusty runs for the remainder of the course. Peter and Rob consolidated in second as did Chris Gould and Caroline Croft in third.  Big climbers on the day were Alex Jackson and Chris Kilsby who flew up the last beat to take fourth. Tim Fells and Fran Gifford just sneaked past Roger and Jane Gilbert on the line to take fifth and sixth.

The maths are now that Christian and Ali can still win if they get a bullet in their afternoon race and Tom and Aaron fail to win the morning race.