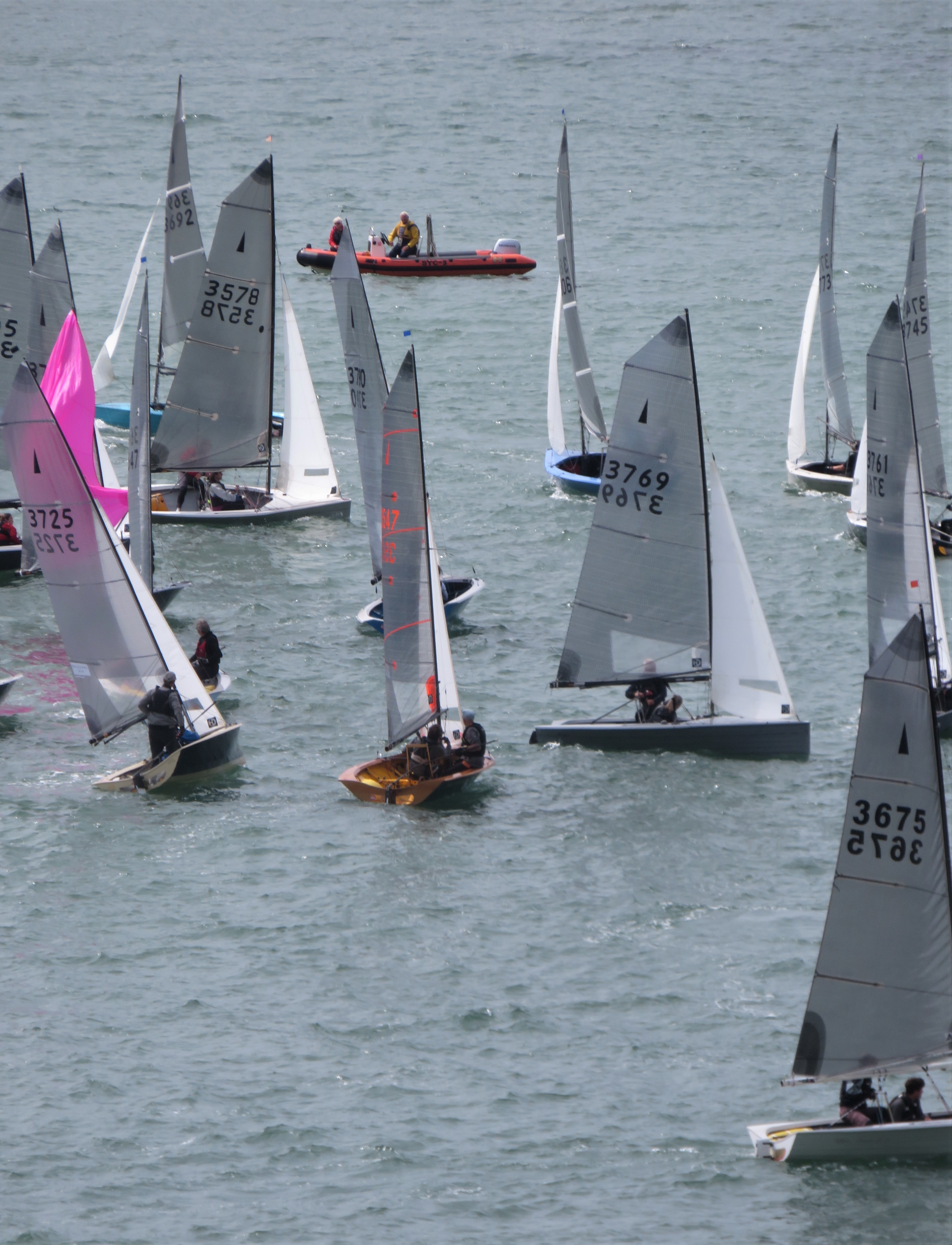 Following the excitement of Tuesdays racing, conditions for Wednesday were close to perfect. A force 3-4 South-westerly was blowing up the harbour with enough shifts and gusts to make for interesting racing.

With the last of the ebb tide flowing the fleet lined up with a few boats getting high and early to fall foul of the black flag.  None of the leading contenders were caught out and again it was Tom Gillard and Aaron Holman who popped out to take the lead around Blackstone.  Close behind and recovering their mojo after a messy Tuesday were Chris Gould and Caroline Croft.

The two leaders slowly extended as the race progressed, becoming locked into a personal match race a long way clear of the chasing pack. No matter what Chris and Caroline threw at them, Tom and Aaron had the answer and with rarely more than a few boat lengths between them came home for their second bullet of the week and to take a strong hold on the leaders position.

Behind these two, Mike and Jane Calvert worked their way up through the leading group to move into third on the third beat but Christian Birrell and Ali Potts were able to ride a gust down below them on the run to get the upper hand at Crossways and hold the advantage back to the line.

Simon Potts and Holy McArthur maintained a steady fifth all around the course with Matt Biggs and Beka Jones taking their second top six result.

A glorious Salcombe afternoon! Sunny, healthy breeze and enough tide for a tour of the harbour including a rare visit to Balcombe up near Kingsbridge which was a screaming mile long reach.

The start was quite heavily Portlemouth shore biased with the flood time making it a very favoured end of the line.  Taxi and Pippa set their stall out early, positioning to win the beach position. They were immediately onto port, crossing the fleet and leading up to Blackstone.  However, they had been just a bit too punchy and were pulled out on the run under the black flag.

This left Richard Whitworth and Jemima Scroggie in the lead heading down to Yalton, chased by Tuesday afternoon winners Peter Ballentine and Rob Allen. With the pack coming up on pressure behind they just got around Yalton clear and were able to stretch away.  Behind them there was a mighty battle between six boats that carried on all the way down to Frogmore and back to Saltstone and was only resolved on the flying reach out to Balcombe.

Tim Fells and Fran Gifford took the low route two sailing while the bunch went high before popping their kites.  This proved rather too ambitious with Roger and Jane Gilbert heading off in the direction of Frogmore before capsizing and breaking a pole.  Tim and Fran delayed their hoist and were up to third for the long trip back up to Blackstone.

At the front Richard and Jemima continued to lead and had an answer for whatever Peter and Rob tried, completing the long course for their second bullet of the week with a comfortable lead.  Behind them, William Warren and Megan Pascoe found the fast buttons to find a way past Tim and Fran to take third, as did Rob Henderson and Alice Markham taking fourth on the final beat to the finish.  In sixth, Tim Saxton and Mary Henderson kept their consistent series on track.

With Taxis black flag and the continued almost flawless sailing of Tom and Aaron, they have one hand on the trophy but will be focussed on keeping it clean tomorrow.

On a sadder note, just before Merlin Week the class lost one of its legends, the much-loved Spud Rowsell; superb sailor, master-craftsman boat builder, passionate about the sport and an all round friendly, helpful and entertaining character. His great rival and friend Alan Warren will be hosting a celebration of Spuds life in Jubilee Gardens at 8.30pm. Everyone who was touched by Spuds spirit are welcome and that will be just about everyone!