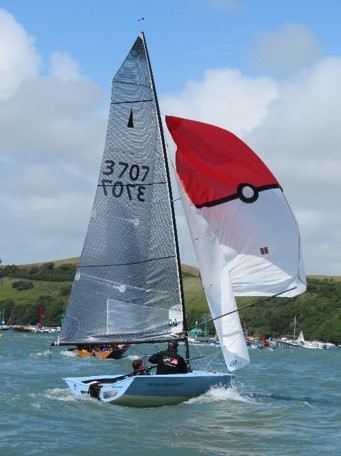 All eyes had been on the forecast for Tuesday since the start of the week and it did not disappoint.  The storm had passed through overnight and by the morning the sun was out and the wind was ripping down through the harbour with some vicious gusts. Conditions were sailable but managing the gusts and finding the right opportunity to gybe were going to be key to success.

The start was in a breezy period and the most notable event was Chris Gould and Caroline Croft getting stuck in irons and reversing down through the line up taking Taxi and Pippa with them.  Up the first beat Ian Dobson and Charlotte Fildes lit the Rockatross afterburners to round first followed by Christian Birrell and Ali Potts.  Taxi and Pippa had staged an amazing recovery to be up in fifth behind the Hendersons and Alex Jackson with Chris Kilsby.

The leading five boats extended away on the gusts down the run and on the return long beat from Saltstone to Blackstone it was Alex and Chris who sailed a blinder to round in the lead from Christian and Ali.  On the run back to Saltstone, Taxi and Pippa got a screaming gust along Fishermans to take the lead which they were able to consolidate on the beat back to Blackstone.

All that was required was to navigate the last run and it was evident to the spectators at the club that Taxi and Pippa had a lot on with a huge gust down through the moorings.  The spinnaker was dropped and they tacked around not something that is often seen!

Taxi and Pippa came home comfortably ahead of Christian and Ali with Alex and Chris in third. Will and Arthur Henderson survived two seriously scary moments when they were both hanging over the leeward gunwale on a high speed run to cross in fourth ahead of Ian and Charlotte who had tested the waters on the last run.  Tim Saxton and Mary Henderson completed the top six.

By the afternoon start the wind had swung more to the SW and was blowing more consistently up the harbour and was a bit stronger than in the morning.  Under a blue sky this was going to be a memorable race.

Although the flood tide was still running against, it was those who started in the middle of the line who benefited from a starboard lift to hold a long line up to Mill Bay. Getting their noses out in front, Peter Ballentine and Rob Allen were able to control the beat to lead around Blackstone for a fast and furious blast back up the harbour. Not far behind were a closely packed bunch who enjoyed spectacular gybe for gybe racing up the harbour. As this group entered The Bag, Tom Gillard and Aaron Holman emerged to give chase followed by Tim Fells and Fran Gifford.

On the beat back to Mill Bay, Peter and Rob played the town side to good effect and extended their lead but were hunted down by Tom and Aaron on the run and reach through The Bag. Tim and Fran in a comfortable third were swatted off the track by a narly gust allowing Roger and Jane Gilbert to move up into the top three.

Although Tom and Aaron gave everything, they were unable to break through and Peter and Rob took the bullet to become the sixth race winner in the first six races. Tom and Aarons second puts them in a strong overall lead at the half way stage.  Roger and Jane consolidated their position in third overall.

Mike and Jane Calvert just pipped Tim and Fran on the line to take fourth, with Matt Biggs and Beka Jones enjoying their best race of the week in sixth.