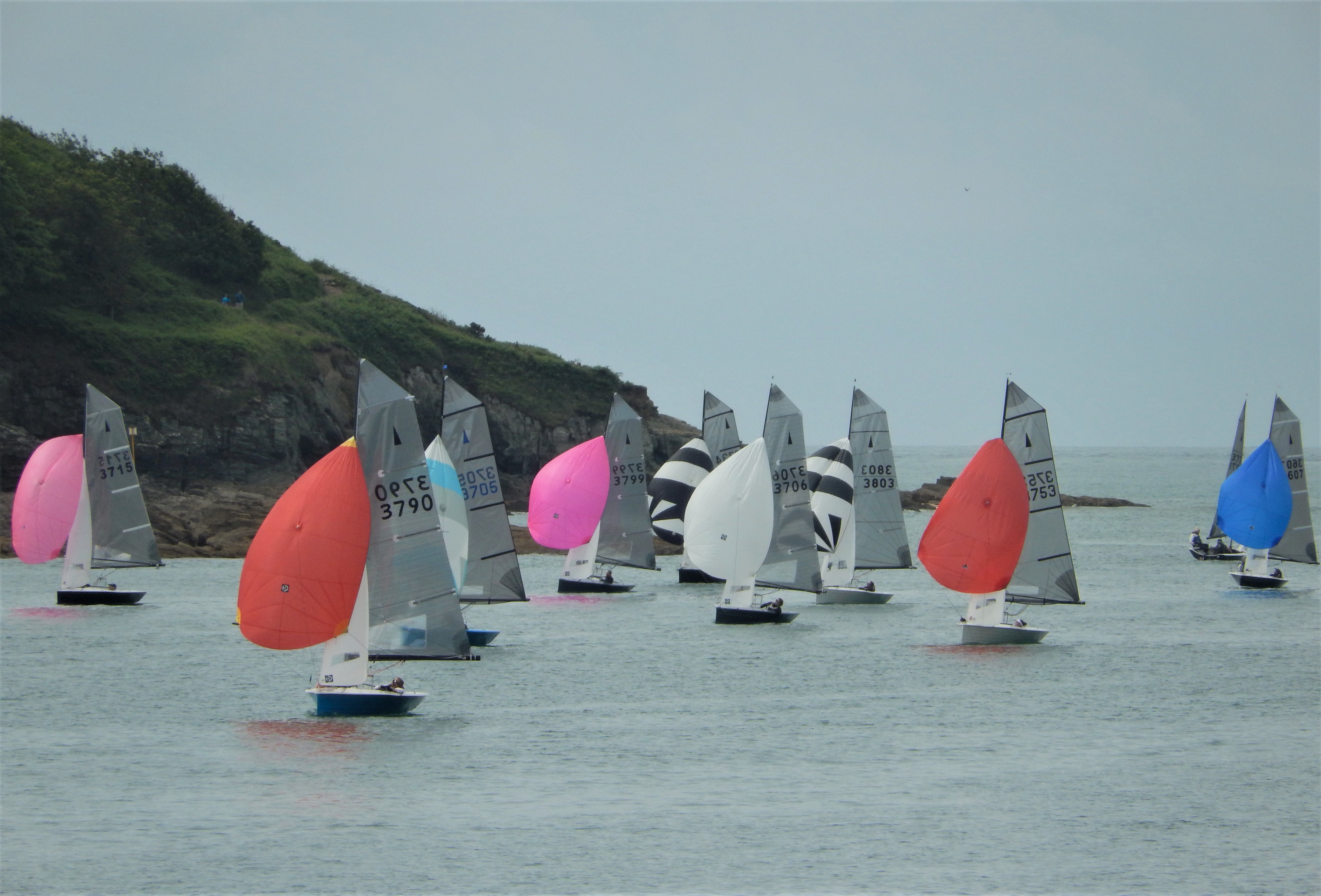 In contrast to the first morning rain, competitors at Salcombe Gin Merlin Rocket Week were greeted by a morning of sunshine though precious little wind.

With the start of the flood tide holding the fleet back and what little wind there was seeming to be on the Portlemouth shore, most of the fleet favoured that end of the line. However, it was those who took the gamble of the town side who prospered with less tide and a lifting port tack up the shore. Local legend Will Henderson and son Arthur read the conditions best to lead up to the Fort and cross over to Blackstone in the lead. Christian Birrell and Ali Potts were the only team to do well up the Portlemouth shore and rounded in second followed by Joe Mclaughlin and Sean Roberts performing well.

On the patchy run to Crossways, Will and Arthurs lead was eroded and Roger and Jane Gilbert came up into third place.

Having initially played the Fishermans beach side on the next beat, all the leaders crossed back over to the town side at the Ferry.  Christian and Ali benefited from some lifting port pressure to close in on Will and Arthur and in a tacking duel put a penalty on them.  This also allowed Roger and Jane to pull through into second.

The final run closed up the leaders and Christian and Ali chose to take the Batson side up to the line.  Although Roger and Jane made gains on the Fishermans side, the tidal gain in the final 100 meters up from The Ferry brought Christian and Ali home clear ahead for their first bullet.  Roger and Jane were a comfortable second ahead of the Hendersons.

Tim Fells and Fran Gifford got the better of a race long battle with Mark Waterhouse and Mat Currel to take fourth and fifth with Alex Jackson and Chris Kilsby recovering superbly from two 720 penalty turns to take sixth.

Conditions were much the same for the start of the afternoon race but with the wind swinging round to the SE and building as the race progressed. Once again, the Portlemouth shore was a popular end due to the line bias but with more wind on the town side, those who started there and got onto port early had some pressure to take them away into an early lead.

At Blackstone the leaders came from the town side with Simon Potts and Holly McArthur leading around from Richard Whitworth and Jemima Scroggie ahead of Mike and Jane Calvert.  Tom Gillard and Aaron Holman were the only team to take the Portlemouth shore route to be near the leaders and rounded fourth.

The run was a minefield with those who got low close to the town shore picking up a little breeze. Tom and Aaron moved into the lead but then the Calverts came through and picked up the new SE breeze to reach down through the harbour and extend away in increasing breeze down to Gerston.

From there on positions didnt change for the remainder of the long race. Mike and Jane took their first bullet of the week from Tom and Aaron who move into the overall lead with a 1,2.  Ian Dobson and Charlotte Fildes brought the Rockatross home in third ahead of Simon and Holly who added a fourth to take second overall.

Big climbers for the second day were Taxi Davis and Pippa Kilsby who were well back at the start and kept moving up the leader board to take fifth. Steve Crook and Sally Townend sailed a really strong race to keep their Hollingworth counterparts (Winder and Whitworth) at bay to take sixth.

All eyes are now on the forecast for Tuesday which looks like being top end after the main storm passes through overnight.