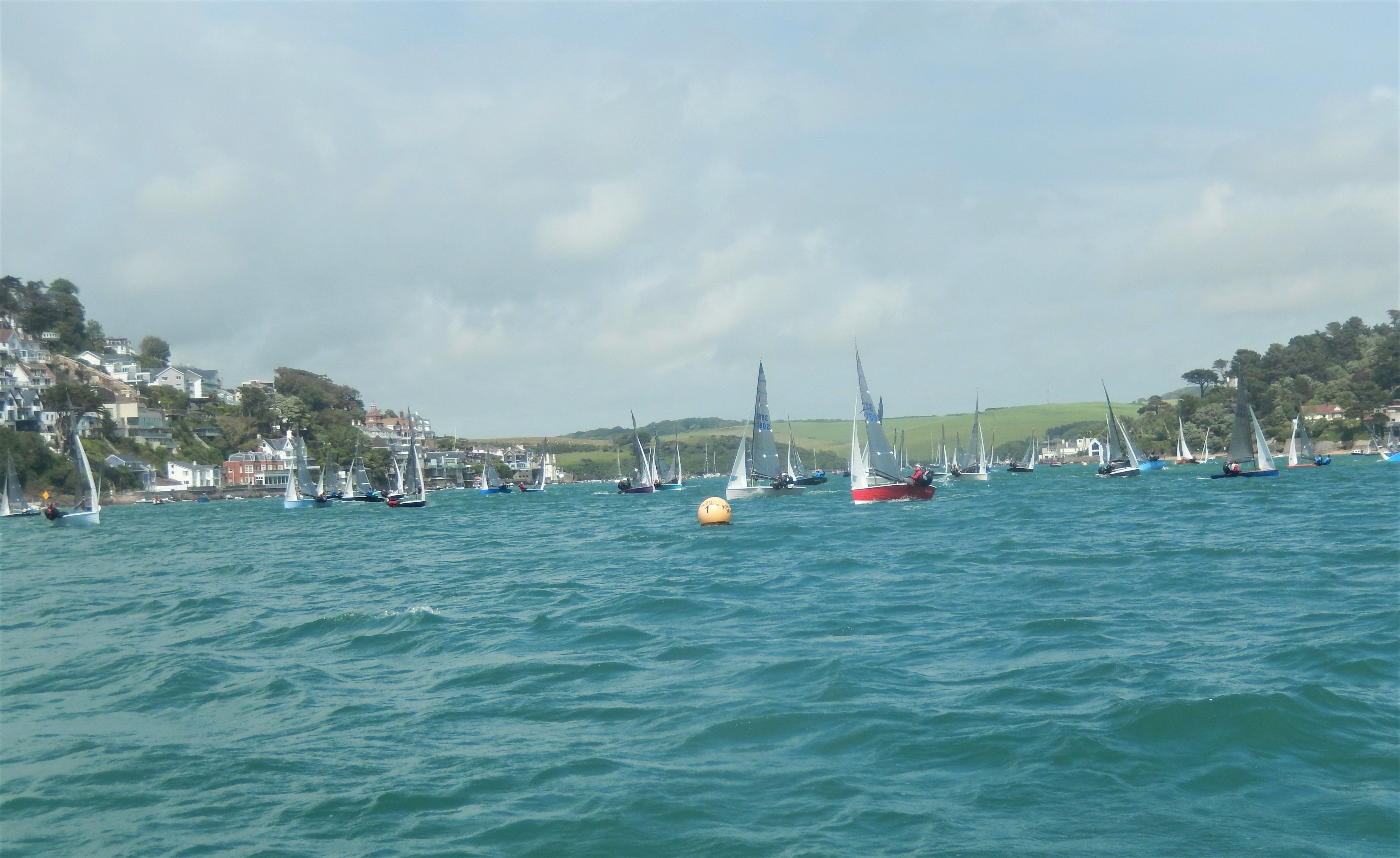 Two years have passed since the Merlin fleet last descended on Salcombe for the Salcombe Gin sponsored Merlin Week, so it was with much excitement that the morning fleet set about the ritual of crossing the estuary to Mill Bay to prepare for the morning race. Unfortunately, the weather gods were not in the same mood and delivered rain and little to no wind for the start.

With random bits of breeze from all points of the compass and a flood tide against, the start was always going to have a high degree of difficulty about it. With quite a scrum near the Portlemouth beach, defending champions Richard Whitworth and Jemima Scroggie carried on where they had ended in 2019, timing a perfect start 10 boats out from the beach in their own bit of pressure to steel away from the pack.  They navigated the vagaries of the beat/reach/run to Blackstone to round well ahead and set off down tide on the long leg to Gerston. Duncan and Harriet Salmon along with Antony and Jo Gifford found some pressure by Biddle Rocks to round second and third.

As the leaders reached out to Gerston the forecast Westerly breeze started to fill in with Tim Fells and Fran Gifford coming through to be challenging Richard and Jemima as they re-entered the harbour into a strengthening, but still very gusty and shifty wind for the return beat to Blackstone.

On the breezy run down past Fishermans Beach, Richard infringed a beating boat and did turns, allowing Tim and Fran to take the lead.  However, on the final beat to the line, Tim and Fran sailed into a hole and Richard and Jemima sailed through their lee to take the first bullet by a nose. Subsequently, Tim and Fran took a points penalty for a pre-start infringement.

Storming up through the fleet after being caught out at the start, pre-event favourites Taxi Davis and Pippa Kilsby took a well-earned third on the line from Roger and Jane Gilbert, Tim Saxton and Mary Henderson and Anthony and Jo Gifford rounding out the top six.

For the afternoon start at 2.30 the South-westerly was fully in with some powerful gusts to make the runs exciting for sailors and spectators alike.  Starting on the top of the tide with the sun out, competitors were treated to a classic tour of the harbour.  A perfect Salcombe afternoon.

With a small bias to the Portlemouth end of the line, fleet newcomers Tom Gillard and Aaron Holman popped out and were able to get the first cross in and lead up to Blackstone, chased by Simon Potts and Holly McArthur and Chris Gould and Caroline Croft.

Simon and Holly managed to find the best lines down to Yalton and back up to take a good lead around Scoble Point and into The Bag, however it was Tom and Aaron who made the best of the tour of the upper reaches of the Ria to lead back into the harbour.

Although the racing was fast and furious there were no overtaking lanes unless someone made a big mistake. One such was Christian Birrell and new crew Ali Potts who dismounted on the run while challenging for second place.

Tom and Aaron controlled the race to the line to take their first bullet ahead of Simon and Holly, with Chris and Caroline just behind in third.  Alex Jackson and Chris Kilsby came through strongly to take fourth ahead of Will and Arthur Henderson who just held Mike and Jane Calvert at bay to take fifth and sixth.

It was a day that saw many capsizes and one mast lost.  The rescue team were put to good use and will probably have a busy week given the fruitiness of the forecast.