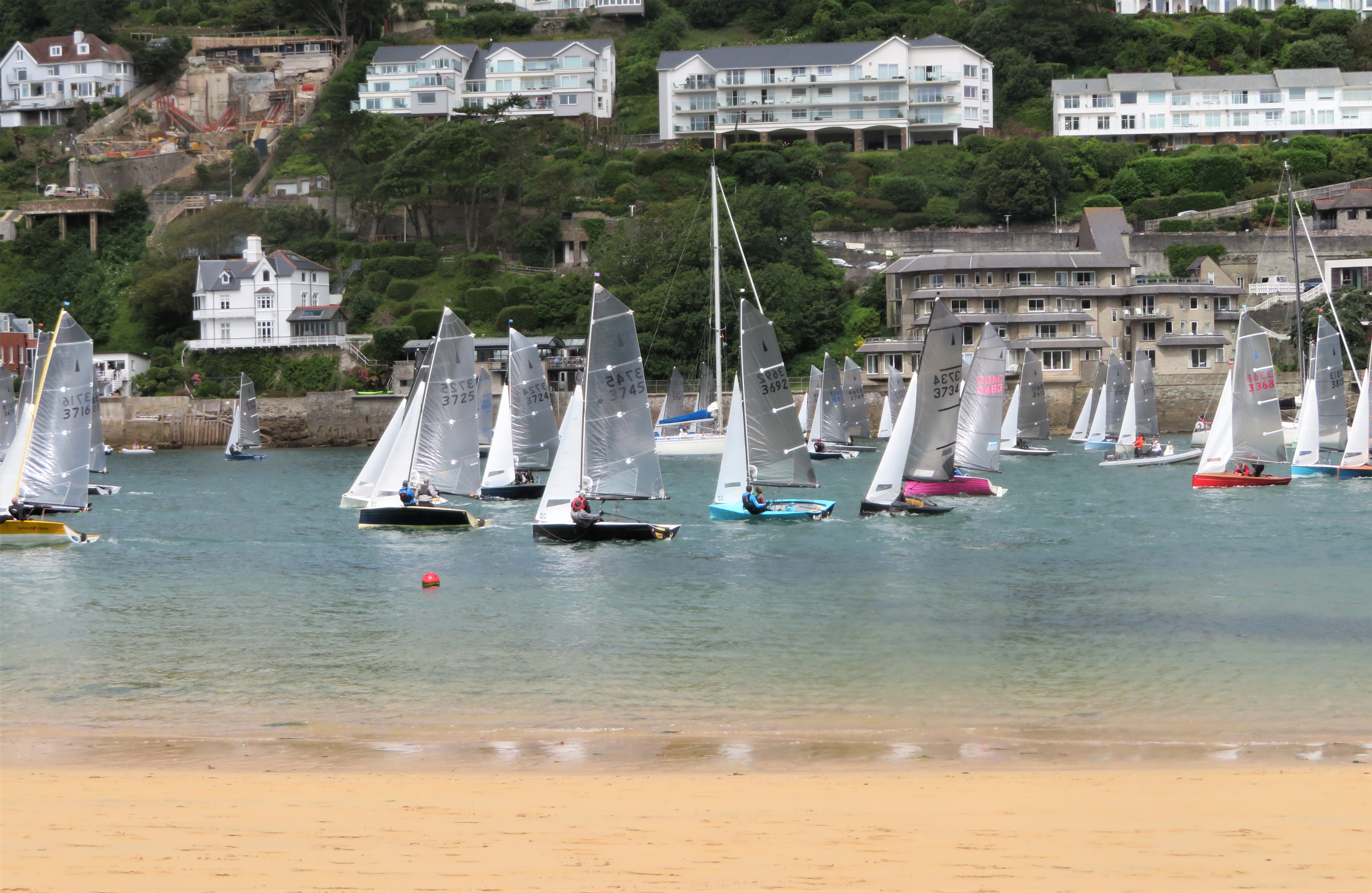 With the title still not decided, competitors were welcomed by more breeze than had been forecast, again from the South-West giving very enjoyable sailing conditions.

After the first General Recall of the week, the fleet were clean away with tide under them.  Tim Fells, sailing with Sandy Ramus after Fran Gifford had sustained a beach games injury, played the shifts up the middle to round Blackstone first.

On the run back against the tide William Warren and Megan Pascoe kept in the pressure  to round Crossways ahead but then fell out of phase going up through the harbour to allow Simon Potts and Holly McArthur through to lead followed by Roger and Jane Gilbert.

At this stage Tom Gillard and Aaron Holman were in sixth and finding it hard to find the overtaking opportunities. Consequently, they started to spin the dice into some of the less popular parts of the Ria.

On the long run down to Gerston and the beat back to the line, there were close fought battles throughout the top six with nice shifts, gusts and tidal advantages to the taken.  At the line Roger and Jane just did enough to get up past Simon and Holly to take their first bullet of the week.  Mike and Jane Calvert again had a great end to the race to get their noses in front of Tim and Sandy on the line who in turn were just ahead of Peter Ballantine and Rob Allen. Jenny and Chris Dodds were flying up the last beat to be a strong sixth.

So, with Tom and Aaron in eighth the title went to the last race.

The wind had shut down over lunch but started to return from the South-West for the start. The good money was to start at the Portlemouth end and Alex Warren and Jonty Freeman absolutely nailed it to take a clear lead up past Smalls Cove only to run aground and allow Alex Jackson and Chris Kilsby up into the lead to Blackstone, followed by Taxi and Pippa Kilsby and, importantly, Christian Birrell and Ali Potts.

Alex and Chris continued to lead up to Fishermans where they ran aground with Chris having to get out.  This allowed Taxi and Pippa to catch up and after a tacking duel take the lead at Blackstone from Alex and Chris with Christian and Ali a very close third.  Big gainers were Richard Whitworth and Jemima Scroggie who played the town side to close right up in fourth.

On the run to Crossways, Christian and Ali took a lower line and when the leading two ran into a whole near the Fuel Barge, they carried pressure through below to take the all important lead. These three then engaged in a boat for boat tacking battle up the Portlemouth shore with Christian and Ali just maintaining their advantage, but with Richard and Jemima attacking up the town side, actually being ahead at the club line but still having to cross the tide.

On the final run, Christian and Ali with one hand on the trophy ran into a hole 100 yards before Crossways and the three chasing boats with more pressure went through underneath them. Taxi and Pippa rounded first and opted for the town side followed by Richard Whitworth and again that proved the fast route with both of them coming in ahead of Christian and Ali with Alex and Chris in fourth.  Chis Kilsby and Caroline Croft also took the town side to come in fifth ahead of Mark Waterhouse and Matt Curel having a great race.

After this nail-biting race in which Christian and Ali had the win snatched from their hands at the very end, the champions of Salcombe Gin Merlin Week are Tom Gillard and Aaron Holman.  This talented team have managed all the variable conditions that Salcombe has thrown at them to triumph in their first year in the class and on their first visit to Salcombe Week.  Quite some performance!