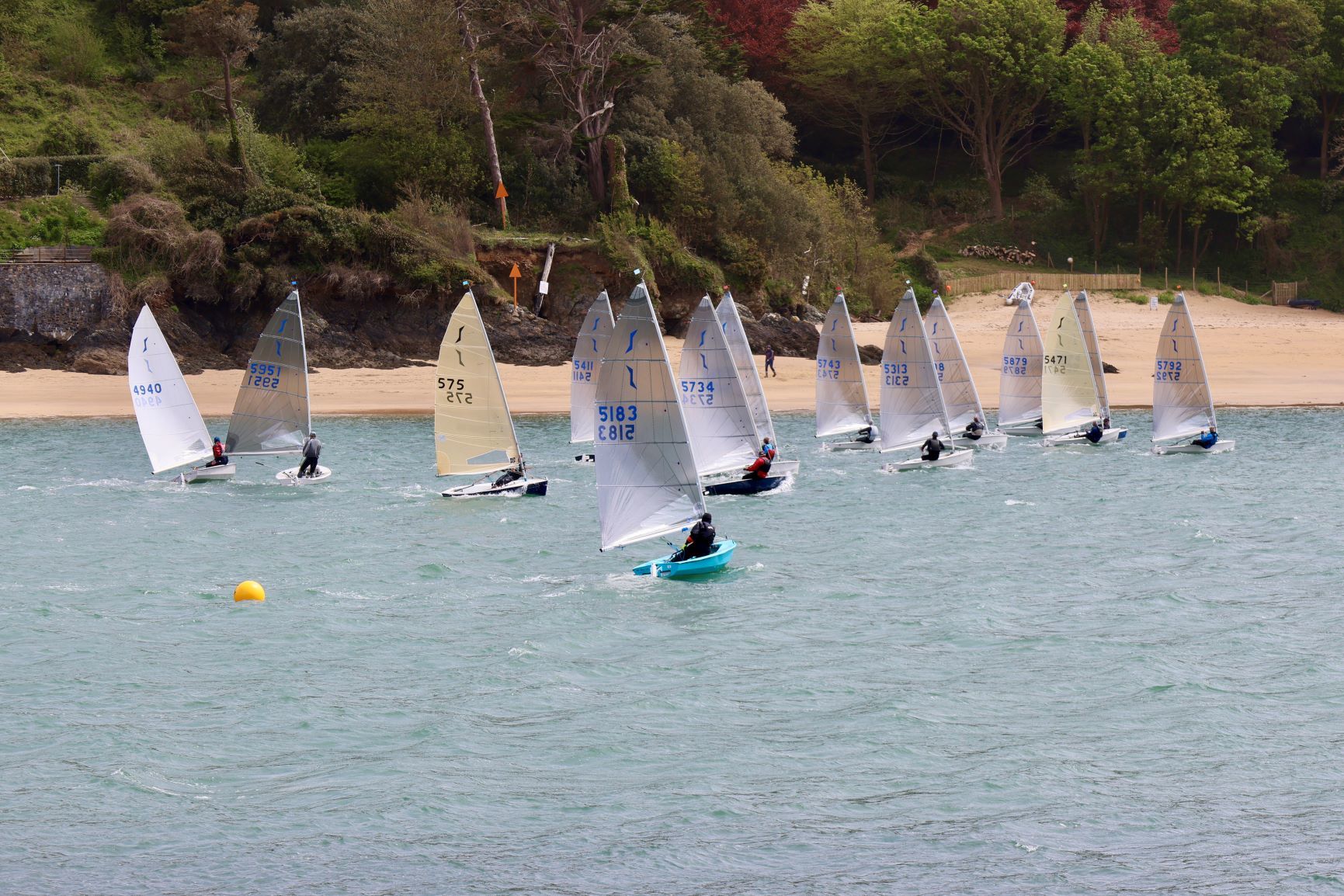 On the morning of Saturday 15th May the dinghy racers of Salcombe Yacht Club were considering alternative arrangements to sailing, be it cutting the lawn or taking the rubbish to the dump, being aware that the weather forecast was potentially beyond the COVID protocols, however upon their arrival at the Batson boat park, Race Officer Graham Cranford Smith declared following consultation with the Wind Guru live data stream that the windspeed on the Watch House anemometer was  truly 14 knots, so racing for the final race of the SYC Spring Series would be go ahead.

Competitors were faced with a low neap tide with a moderate breeze blowing out of the South, South West and all directions between.  The Race Officer mitigated any risk by keeping the fleet in the harbour, displaying 131313 on the Watch House.

First away was the Handicap Fleet which included a smattering of Salcombe Yawls, the RS400 of the Petes Colclough and Benett, a Laser and the Merlin Rocket of Andrew and Tris Squire.  It is fair to say that the Yawls found racing quite hard work, and first retirees were Mike Knowles and Nicki Bass, for whom their arrival at the start line was sufficient for them to secure the series and retire to the beach to play with 60m of dynema and a winch, second of the retirees was Andrew Squire for whom retirement is becoming a recent habit.

As some gusts filled in, the two remaining Yawls made a spectacular sight, with James Greenhill holding wis tiller firm (having lost the extension) to secure first place from the Petes and the septuagenarians Geof Gilson and Chris Spencer-Chapman.

Fourteen highly competitive Solo sailors came to the line for the second start of the day, with David Greening leading off the line only to make a rookie error and get stuck in irons off Woodcot Rocks.  Tim Law returning from injury let Chris Cleaves and Paul Ellis around Blackstone, and it was on the second run that some gusts filled in, allowing Ellis to plane past Law and Cleaves on his own private wind, which Law and Cleaves picked up as they closed in at Crossways, leaving Law capsizing on the gybe and Cleaves chicken gybing to round the mark.  These shenanigans saw Greening back in the mix, with Ellis taking the win and Cleaves, Law and Greening finishing within seconds of each other in that order.