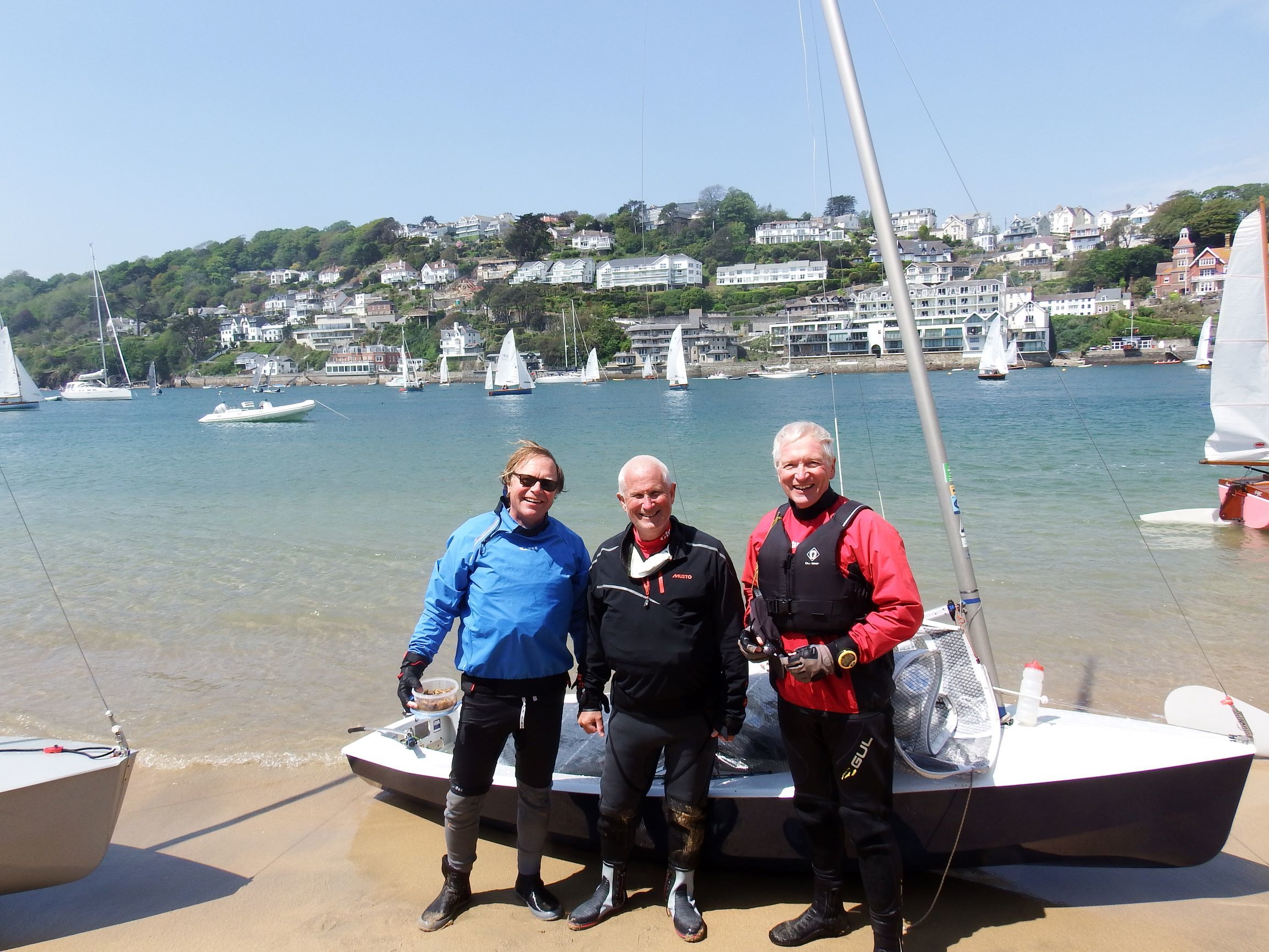 Race 1 on Saturday afternoon saw the fleet on the naughty step, with the first start subject to a general recall, on the second start, under a black flag, the fleet powered off the line in search of the Gerston mark.  By Snapes Point Paul Ellis had already built a comfortable lead which by Gerston was commanding and to this correspondent appeared unassailable, however sailing at Salcombe is often likened to a game of Snakes and Ladders, and Paul, together with the P&B cohort of Davenport and Lonsdale landed on a snake, while Mark Maskell climbed the ladder of a filling sea breeze from Biddle head to take the win from Isaac Marsh, with Paul holding onto third.

Sunday dawned and a course for Race 2 was set around the creeks in a freshening breeze, first mark Yalton.  The leading bunch were the boats who crossed the tide into the Yawl trots to shelter from the ebb tide behind Snapes, these comprised Chris Cleaves, David Greening, Mike Hicks, Tim Law and Paul Ellis.  Ellis dropped out of the group while completing penalty turns, while Cleaves found the lift off Goodshelter to lead around Yalton.  On the trip into Frogmore, Law got caught in the wind shadow off Hallwell Woods, while rookie Oliver Davenport broke through.  There followed a reach to Gerston and a fetch back, which sorted the men from the boys … the boys proving fitter, with Davenport taking the win from Cleaves.

Race 3 was back-to-back with the morning race, leaving little respite.  With the tide now at maximum ebb, the temptation to take a starboard lift across the tide proved too much for Cleaves and Hicks who struggled to make the Fairway buoy, whilst those who doggedly pursued the battle up the Portlemouth shore fared better, notably Robin Hodges and Paul Ellis, who were joined by Simon Yates who had pursued a leeward route through the Bag.  Eventually Tom Lonsdale and Tim Law were able to power through on the beats to take second and third places.

So, Monday morning dawned with sunshine, wind and a photogenic harbour, and the PRO wisely resisted the temptation to send the fleet into the Bag, setting Yalton, Blackstone, Yalton, Blackstone, Blackstone to Yalton being a two mile beat into a spring ebb tide in a force four East North Easterly on the nose to the windward mark.  Ellis, Cleaves and the team Northampton powered off the start line toward the Salcombe shore, while the rest of the fleet gasped for clear air, having to work the Portlemouth shore to find a clear lane.  Davenport and Lonsdale had noted Cleaves routing to Yalton from the day before to plane in to the mark to control first and second place, with Paul Ellis in third.  Star of the race was Malcolm Mackley who made significant gains into single figures by pursuing a lonely course up the Portlemouth shore on the second beat.

Third place was sufficient to secure Paul Ellis the Open win from Olly Davenport with Tom Lonsdale third.  Paul started consistently well, sailed fast and in the right direction, it is only a matter of time before Davenport and Lonsdale work out the direction!

The weekends racing was wrapped up at a prizegiving on a sunny Yacht Club terrace where Paul thanked all the race team, catering, and bar for making such a great event.