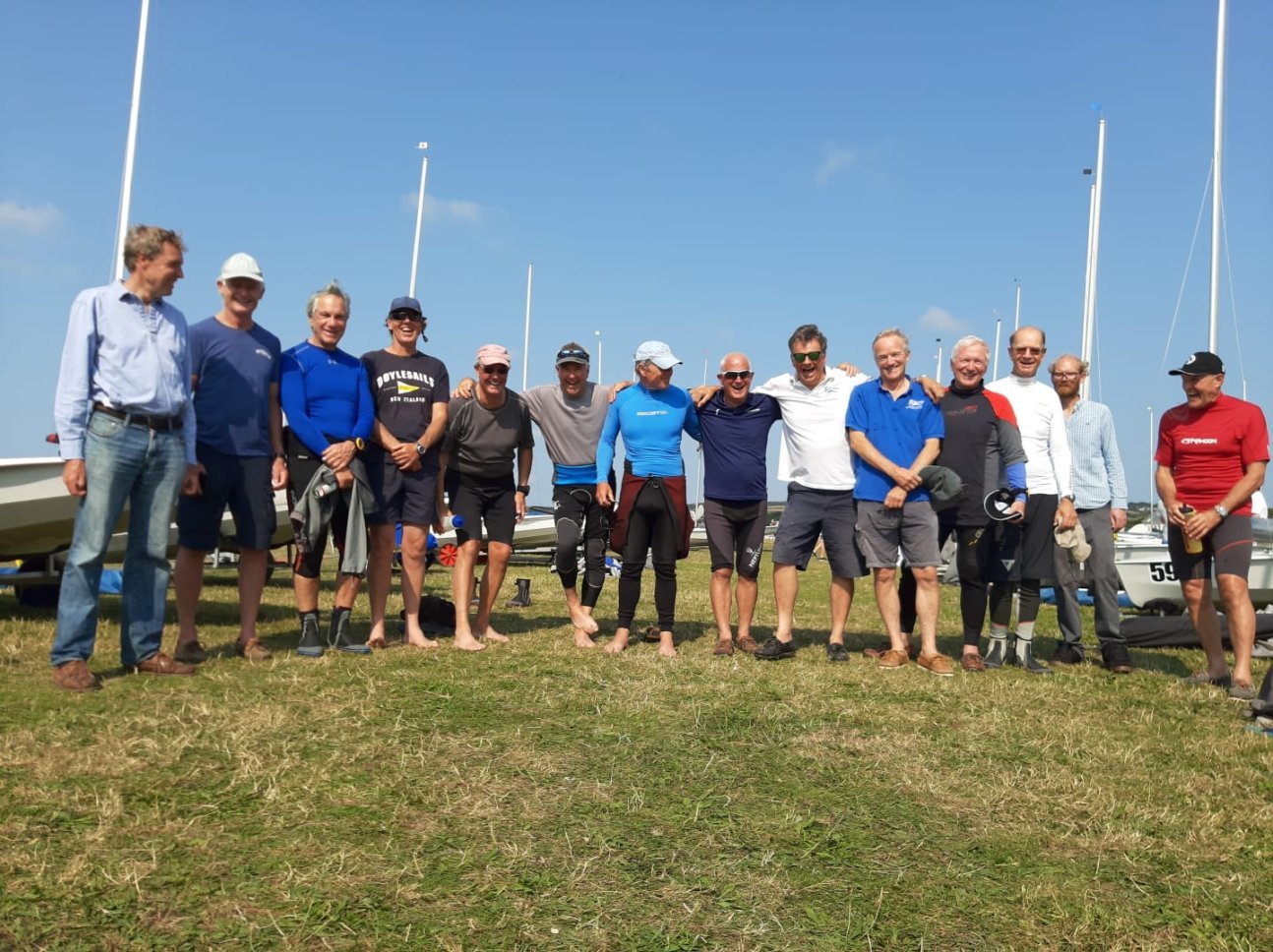 Notwithstanding portentous dire warnings that we would be on respiratory ventilators in Truro Hospital by Wednesday, fourteen of the indigenous Salcombe Solo fleet journeyed to Marazion to compete in the Solo national championships 21st-27th August 2021.

Despite the age of the Solo design, (and many of its protagonists) the class continues to confound its detractors. The Solo is essentially evergreen. It is a favourite with those who prefer to sit in, rather than on a boat. The only slight fly in the ointment is the limited boom clearance and its poor behaviour when capsized. These areas are challenging to those less flexible than once they were. Despite this, the Solo, already enjoying a renaissance anyway, has had a post-covid boom.

A healthy ninety eight, mostly superannuated men and one lady, showed up from all over the UK for the Solo Nationals at Mounts Bay. Salcombe Yacht Club had the most numerous entry by a large margin. All credit for this goes to our esteemed and dear fleet captain, Adrian Griffin.

By and large the racing was not epic. The wind was mostly light and variable. When in the North, Mounts bay is reminiscent of Torbay i.e. very shifty. Thirty degree shifts across the course are common. The breeze was often in the North.

To be honest, the less said about the sailing, the better. Many of us failed to cope with the vagaries and posted inconsistent results. Or if consistent, consistently bad.

Accommodation-wise the Salcombe-ites were disported at locations around the town. There was a contingent at the Marazion Hotel with silver service. Others such as Paul Ellis and ship's boy Yates moored off and stayed on yacht Firefly. Likewise Jonathan Reynolds and family anchored their fine Atalanta yacht off, too.

A group of four rented a house at the top of town. Among this cohort was Vice-Commodore Chubby . Here we learned first-hand what it is like to be living in close quarters with him. Vice, is certainly an apt moniker. Others at this location, including your correspondent were not spared criticism.

The sailing programme limped to an anti-climactic conclusion. No races took place after mid-day on Wednesday. The standings that day prevailed leaving Paul Ellis a superb third and also Tim Law a very respectable ninth. Though Tim later lamented that this was his worst Solo Nationals score, to date. Had the week continued he would almost certainly have improved on this.

Cleaves appeared on the final results a very creditable eighteenth overall.  Had the week continued he would definitely have subsided to mid-fleet.

Greening was also well up. As was Mike Hicks who had had an uncharacteristically poor start to the week.

Salcombe Yacht Club won the Weatherall Cup being the best club team prize which was collected by Team Cap Adrian Griffin. We can wear our Solo t-shirts: "Probably the best Solo fleet in the world" with conviction.

But the main thing was, we all had a great time. It is true, that almost all of the humour was off-colour and puerile. Especially when Malcolm Bell made a guest appearance one evening.

The lack of female influences meant that we were left rather untrammelled. Enjoying a post-race beer some of us decided that we needed our own SYC group. To improve diversity this was to be distinct from the genteel Salcombe Yacht Club "Ladies that Launch". From the alcohol-fuelled ether we plucked a name:

The average age of the Salcombe Solo fleet at Mounts Bay was over sixty. Mental age: about twelve.