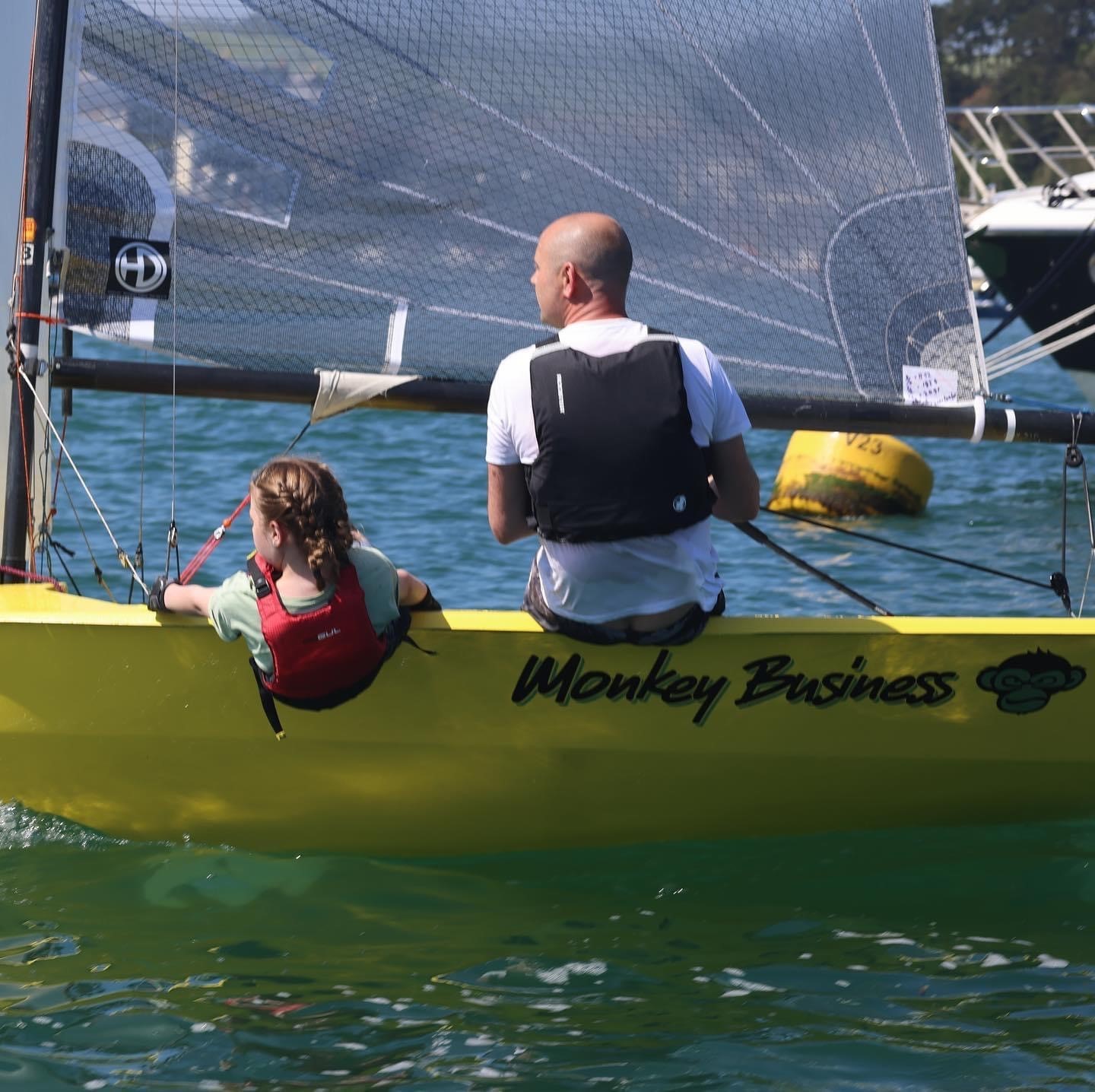 After weeks of dreich weather, finally, finally, a sailing day arrived in June with conditions corresponding to the time of year and worthy of the noun: summer. Glorious.

We were greeted by wall-to-wall sunshine; a better than forecast 8 knot Southerly breeze. The only fly being a start on dead low water increasing to a moderate flood tide, as the racing progressed.

The race team set a decent beat to Mark 1, Blackstone thence a long run/reach to Gerston with a loop, Mark 2 off Smalls beach and then Mark 3 giving a short beat to finish against a gathering flood tide. This produced an elapsed race time of around ninety minutes. About bang on target then.  Very nice too.

First off was the junior fleet being represented solely by Issy Wood in a Topper 5.3. Issy is part of the future of dinghy sailing.  She sailed impeccably despite the absence of club competition.

This effectively was a three-way battle between Andrew Groves just about fending off the young pretenders of George Alexander and Ben Meek.  It is only a matter of time before these two are unbeatable: ever.

Notwithstanding the weather, we had here a fleet comprising two National Twelves, two Merlins and some RS Aeros.

The occasion was notable for the inaugural race of young Esme, sailing with her Uncle John Burn in his beautiful N12.  Esme, despite her tender years and diminutive stature put her heart and soul into the race. Coming as she does from the Burn lineage, a long future of racing surely awaits her. Really well done Esme.

Elsewhere, superannuated hands slugged it out at the front of the fleet like drunks in an Irish bar. This followed a start where some thought there might be an individual recall. The Race Officer obviously saw it otherwise; fair enough.

Anyway, sometimes stuff worked. Mostly it didnt.  The superb conditions were such that it was possible to believe one had sailed well. Right up to the point of reading the published results. Tim Fells finished five minutes ahead on corrected.  Embarrassing for the rest of us, really.

When it comes to chronological challenges, the Solo fleet is club stalwart central.

Eighteen boats made it to the start line in good shape having overcome the obstacles imposed on them such as non-functioning limbs.  At least one team member is reported to have recently had a fall. A fall for your average Solo helm, is these days, a life event.

Anyway. The conditions on hand suited Simon Dobsons skill set in the Battle of Stalwarts this beautiful day. Simon is on the younger end of the Stalwart spectrum.  He aced a win against the slightly off form Paul Ellis who is usually invincible. (Ellis: fifth).   Third: Robin Hodges who is an apprentice Club Stalwart, only. Second: Yotter Yates. (Full Club Stalwart)

Note. Such was the weather, Yates dispensed with his jacket and tie for the duration of the race.

Un-woke, off-beam commentaries about folk who are one step removed from serried ranks of wipe down Parker Knoll chairs are obviously in bad taste here. Besides, refreshingly, the Yawl fleet lay claim to James Greenhill and Anthony Lofts who are officially young. The Solo fleet can only dream of such things.

As will be reported elsewhere Salcombe Yacht Club hosted a Topper open meeting the following day: Sunday 13th June.  Twelve entries. All helms under the age of seventeen.

Watching on we witnessed an extraordinarily high standard of talent in a sea-breeze v gradient breeze contest.

Even unto those at the back of the fleet everyone raced impeccably. The margin between the good and very good, was slight indeed. Notably, the top three places finished on equal points being split by count-back only.

Toppers: please come again. We will organise better wind and a less brutal tide next time. Extremely well done to all who competed in tricky conditions. 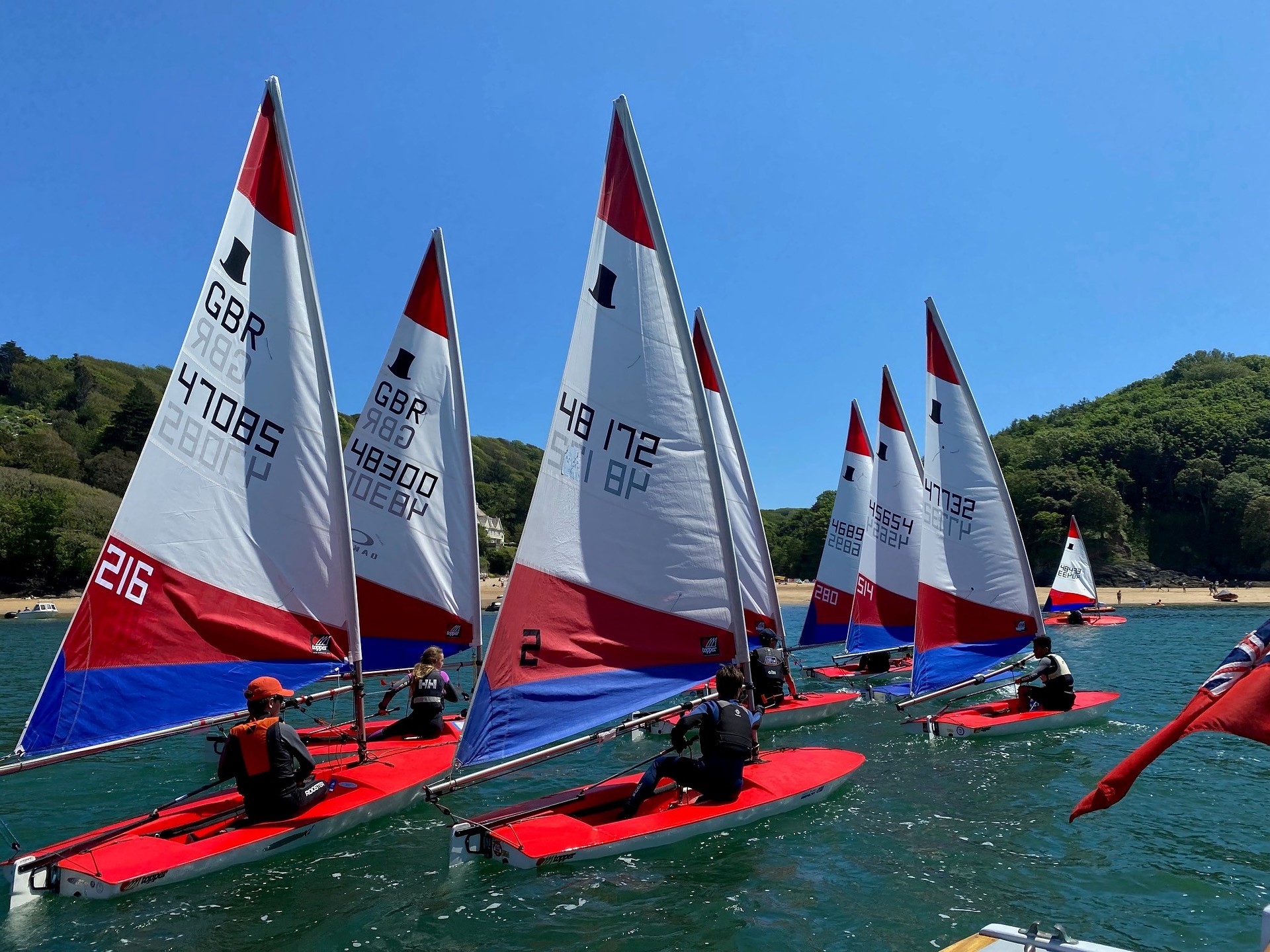